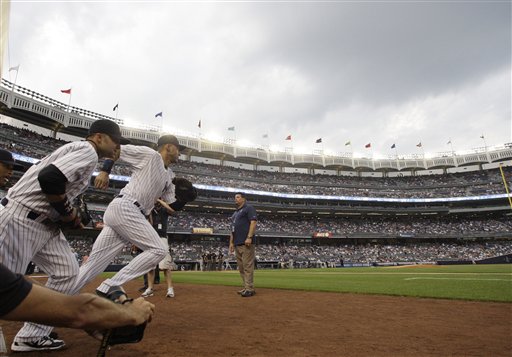 Still dealing with jet lag but in an appropriately analytical mood, I spent Thursday night's game in the Yankee Stadium press box watching Derek Jeter inch closer to 3,000 hits and Bartolo Colon show up sans posse or his best stuff. The result is up at Baseball Prospectus. A taste:

Yet for all of the handwringing leading up to the moment—including the ongoing, distracting question of whether he would get the hit at home—the 3,000th hit, whenever it lands, isn't about Derek Jeter circa 2011. It's about his entire body of work, a Cooperstown-worthy run that includes five world championships, seven pennants, 14 trips to the postseason (during which he's hit .309/.377/.472), 11 All-Star appearances, the 1996 Rookie of the Year award, three top-three finishes in the AL MVP voting, and a virtually unassailable reputation for professionalism—for showing up every day with his eye on the prize and withstanding the harsh glare of the spotlight in the game's largest market. When the fans stand and cheer the moment of that momentous hit, the ovation will be richly deserved in spite of Jeter's current struggles and controversies. Whatever the flaws in his game, he has given far, far more than he has taken as far as the Bronx crowd is concerned.

Yet, some do assail. Jeter's line also includes five Gold Gloves of admittedly dubious provenance given the avalanche of advanced data to the contrary, but then the Gold Gloves—Fielding Grammys, as I've long called them—have been a joke since at least 1999 when AL managers proved they weren't paying attention by awarding Rafael Palmeiro the trophy based upon 28 games played in the field. Beyond the advanced metrics and the hardware, Jeter's continued presence at short remains a sore spot among his detractors. For one thing, it was the defensively superior Alex Rodriguez who stepped aside to third base upon being traded to the Yankees; for another, there's no obvious landing spot once Jeter moves from shortstop, particularly with the offensive bars at other positions rising while his own performance flags.

With all that baggage in tow, Jeter stepped into the batter's box at Yankee Stadium on Thursday night, the first time in over three weeks that he had played in front of the home crowd. Greeted by public address announcer Bob Sheppard's beyond-the-grave introduction as well as a warm ovation from the sellout crowd of 47,787, he came to bat in the bottom half of the first inning after the Rays had scratched out a run in the top half. He smoked a first-pitch double off Jeff Niemann, a pitcher against whom he'd gone 5-for-9 previously—a promising stat, but hardly a meaningful one. After the game, he would admit that collecting hit number 2,998 had him thinking this might be the night. "Probably," he responded later when asked if it was the first time he had consciously thought about the milestone in the middle of a game. "You think about it just because everywhere you go there's signs and people are mentioning it. It's still a ways away, but after that first one, I'd be lying to you if I said I didn't think it was attainable today."

Jeter was stranded at third base when the first inning ended, but he quickly got another opportunity, coming to bat with two on and runners on second and third in the second inning, with fans on their feet, cheering intently. Alas, he slapped a first-pitch grounder to Sean Rodriguez at third base (Evan Longoria was the night's DH) and was thrown out easily, stalling his quest and snuffing the Yankees' scoring threat.

By the time he got another opportunity, the Yankees' deficit had expanded from one run to five, the lineup unable to take advantage of the small openings Niemann had granted them while Yankees starter Bartolo Colon struggled. Darkness had fallen, intensifying the effect of the flashbulbs popping everywhere, but the crowd was raucous even with Yankees down 5-0 with one out in the fifth. After getting ahead 1-0, he ripped a sharp shot down the third base line. It looked like it might go through—even in the press box, some could be seen trying to apply some silent body English—but Rodriguez made a diving stop, then recovered just in time to throw him out. "That hurt my feelings a little bit," Jeter quipped afterwards. "They were joking on the bench that I hit two or three balls a year down the third base line, and he caught one of them."

Elsewhere in the piece, I took issue with Joe Girardi's decision to keep the obviously struggling Colon in the game after allowing 11 of the first 21 Rays hitters to reach base through four innings; he allowed a single and a homer to start the fifth, increasing the deficit from three runs to five, and reducing the Yankees' win expectancy from 24 percent to nine percent; he could have stopped the bleeding but didn't. I raised the point with Girardi in the postgame presser, but he shut me down with rote answers about trusting his starter and worrying about frying his bullpen, words which rang hollow given Hector Noesi's ability to provide length given that he threw 3.1 innings of scoreless ball.

For some reason, what really raised my hackles even moreso was something else entirely, namely Bob Klapisch's celebration of Joel Sherman's unsubtle digs at Alex Rodriguez's recent power outage. Even while praising Rodriguez's ability to fit in with his teammates and his recent avoidance of public relations gaffes, Sherman couldn't resist mentioning that the slugger hasn't homered in 81 at-bats, the longest single-season drought of his career, or reminding readers that he'll never measure up to Jeter in the hearts of Yankee fans:

Whether it is talking secondary leads with Nick Swisher or the proper moments to bunt with Brett Gardner or lecturing Boone Logan on having a plan worked out well before facing a key lefty, Rodriguez has a baseball gym rat side he likes to share. He has mentored Robinson Cano and is forming an association with Eduardo Nunez. And, yes, his relationship with Jeter is now rather tension free; actually it approaches relaxed, respectful and comfortable.

He, of course, will never replace Jeter in hearts or minds of Yankees world. Jeter is homegrown and a cornerstone to dynasty. He never was reckless with words or deeds like Rodriguez. So, for example, A-Rod's 700th homer will not be met with near the warmth, appreciation and adoration that Jeter's 3,000th hit will evoke from the faithful. Nevertheless, he has come a long way baby as a Yankee, able to meld into the background; not feeling the insecurities that would trigger a need to step on Jeter's moment or to embrace a new controversy.

Still, Rodriguez is not paid to be a singles hitter, and thus is getting a big break now that Jeter is dominating Yankees coverage. He hurt his right knee June 19 in Wrigley Field and has run gingerly and swung more with his upper body since then. It would be no surprise if he begged out of the All-Star game to rest those weary legs, tried to find a way to regenerate a cleanup game for the second half.

Which is a reminder that Rodriguez turns 36 in three weeks and is facing a fourth straight year of declining slugging percentage. He would be under a microscope about his absent power, retreating skills and if he is going to become a financial albatross to the Yankees, except there is someone else already absorbing the substantial majority of questions on those subjects.

Never mind the easily obtainable fact that Rodriguez was hitting a more-than-respectable .350/.404/.438 during said power outage when those words were written, snapping himself out of an earlier slump. Or that his sudden spate of singles helped counteract the too-many-homers tendency at which Sherman had clucked disapprovingly back when the Yankees' Guillen Number was above 50 percent. Or that relative to his teammates and peers, he has been more than respectable; his .301 True Average ranks fourth on the Yankees (but a trivial eight points out of second) and fourth among third basemen (and an even more trivial three points out of second). Or that by playing through his injury while Jeter was sidelined, Rodriguez had avoided forcing the Yankees into the position of playing both Nunez and Ramiro Pena on the left side of the infield, an heroic act if there ever was one.

Any other superstar playing through injury with such effectiveness at a time when his team's lineup was short would be lauded, particularly if said team not only kept on winning but enjoyed its best stretch of the season during that run. Not Rodriguez, at least in the minds of some of the baseball media's biggest and most cynical names. Haters gonna hate, as they say, but watching such intellectual dishonesty from my new vantage point in the press box doesn't make it any more appealing.

[Update]: We are flooded with Jetermania these days, but — particularly if you are in a cynical mood — please do yourself a favor and read the outstanding pieces on his pursuit of 3,000 hits by the incomparable Joe Posnanski and by former major leaguer Doug Glanville. Both will amply reward your time.