Share All sharing options for: Series Preview: Yankees vs. Rays 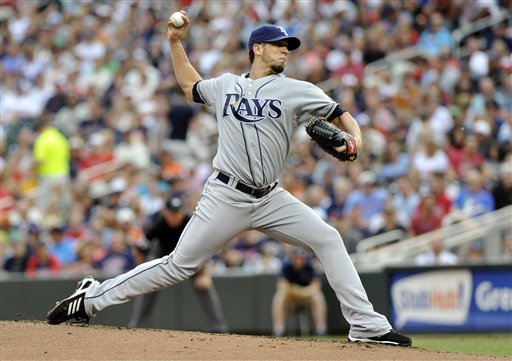 The Yankees and Rays will wrap up the first-half of the 2011 season with the outstanding pitching matchup of CC Sabathia versus James Shields (above) on Sunday. (AP)

The stakes in this series are clear. Derek Jeter needs three hits to get to 3,000 at home before the All-Star break and the Yankees' subsequent eight-game road trip (which includes another four-game set against the Rays). The Rays enter the series four games behind the Yankees and thus could pull into a tie with the current American League East leaders via a very unlikely sweep. If that's not compelling enough, the finale on Sunday pits two of the most dominant pitchers in baseball against each other.

The Yankees and Rays have played just two games against each other thus far this season, splitting a two-game set at the Tropicana Dome back in May. As a result they will play 16 more times from tonight through the end of the season. That's a fifth of the Yankees' remaining schedule. Get used to this matchup.

YES's Kim Jones pointed out on twitter last night, Derek Jeter was three hits away from tying Lou Gehrig's all-time Yankee hit record when he stepped in against Rays' starer Jeff Niemann on September 9, 2009. By the end of the night, he had picked up his three hits, all off Niemann. Those were better times for both players. Jeter was having his last great season and was on his way to his fifth world championship. Niemann would finish fourth in the Rookie of the Year voting that year after going 13-6 with a 3.94 ERA (110 ERA+). Niemann's ERA+ has been 85 in the season and a half since and hasn't really been right since a strained shoulder pushed him to the disabled list last August. Niemann was 10-3 with a 3.12 ERA before the injury, but went 1-5 with a 10.13 ERA in seven starts after his return. This year, he went 1-4 with a 5.74 ERA in six starts before hitting the DL again, this time with a sore back.

Things have gone better since his return. Though one of his starts was a disaster against the lowly Astros, the other two have been quality and seen him allow just one run in 12 innings while striking out ten. Still, the Rays confidence has to be low coming into this start. A hearty 6-foot-9, the 28-year-old Niemann is basically fastball/curveball, with the heaters (two- and four-seam) coming in right around 91 miles per hour. He'll mix in the odd changeup, slider, or splitter, but those are show-me pitches at best.

Bartolo Colon returned from the disabled list last weekend like he had never left. He needed just 80 pitches to toss six scoreless, walk-less innings against the Mets, striking out six. He brings a 13 1/3-inning scoreless streak into this start and will be facing the Rays for the first time this season.

Hellickson entered the season as the favorite for the American League Rookie of the Year award and, while his ERA above suggests he has largely lived up to that hype, he's been as much lucky as good in the first half. The scouting report on Hellickson coming into the season was that he had a low-90s fastball that could spike to 95 and a killer changeup, but pitched like a finesse pitcher, pounding the strike zone and intelligently mixing in a two-seamer, cutter, and curve. The results were lots of strikeouts (more than one per inning in his minor league career) and lots of ground balls. Thus far this season, however, his fastball has sat down around 90 miles per hour, the cutter and curve are being used less and less to the point that he's almost become a two-pitch pitcher, his strikeout rate has been below league average (5.9 K/9), and he's been a rather extreme fly-ball pitcher, inducing roughly twice as many flies as grounders. Instead of dominating his opponents, he's surviving them thanks largely to an unsustainable .225 batting average on balls in play.

Garcia has a better strikeout-to-walk ratio than Hellickson, a lower ERA despite a less favorable home ballpark, and hasn't been nearly as reliant on his defense (.283 BABIP). Over his last five starts, all quality, as have been 8 of his last 9 starts, he has posted a 1.87 ERA and walked just five men while not allowing a single home run.

One thing I love about watching David Price work is that early in ballgames he seems to try to see how long he can go without having to throw anything other than his high-90s four-seamer. The answer is usually surprisingly long. Eventually the 25-year-old lefty will break out a changeup or a curve to get a key strike, but for the most part, the first time through the order he's Jumpin' Jack Flash, just gas, gas, gas. Indeed, Price has dominated in the strike zome this year, leading the league with 8.9 strikeouts per nine innings and walking less than two men per nine for an outstanding 5.30 K/BB. He has four double-digit strikeout games this season, two of them coming in late June, and hasn't walked more than two men in any of them. Given all that, that 3.56 ERA looks high, but I can't figure out why it's not lower. He's not been unlucky. He's not been homer-prone. Still, he hasn't strung more than three quality starts together at any point this season. When he last faced the Yankees he gave up five runs in five innings despite a solid 5:1 K/BB. The big blow in that game was a three-run homer by lefty-killer Curtis Granderson in the fifth.

The Rays didn't lose that game, however, because A.J. Burnett coughed up six runs in 5 2/3 innings, including three home runs (by Johnny Damon, B.J. Upton, and "Super" San Fuld). Burnett caught a bad break in his last start when Alex Rodriguez failed to catch a two-out foul-pop in the seventh and prevented Brett Gardner from catching it at the same time, then Joe Girardi left him in to cough up four runs and the lead immediately after. There was plenty of what-iffing and second guessing to go around after that start, most of which just attempted to explain away a couple of bad breaks, including a three-run Austin Kearns home run on a pitch that was anything but a meatball. Still, Burnett once again failed to turn in consecutive quality starts, whether you want to blame Burnett, Girardi or Rodriguez, or credit the Indians or the fates. Over his last five starts he has posted a 3.51 ERA and struck out 8.4 men per nine innings, but just two of those starts were quality.

Clear your calendar, this is the game to see. What a great way to end the first half of the season. Thanks in part to a major drop in BABIP (from .344 last year to .264 this year), Shields has rebounded from a miserable 2010 to have his best major league season at age 29. He leads the majors in complete games (6), the AL in shutouts (3), is just behind Price in strikeout rate (8.8 K/9) and has matched him with four double-digit strikeout games, two of which came in games that he didn't complete. In June, he completed three straight games, shutting out Boston in the first (he's the only starter to do so this season) and allowing just one earned run in those three starts combined. He struck out 19 in the last two of those three starts, then struck out ten in his next turn, for 29 Ks in 25 innings over three starts. His last turn was decidedly underwhelming following all that (a quality start loss in Minnesota). Shields last faced the Yankees on May 17 at the Trop and struck out nine in seven innings against just one walk, but gave up four runs (three earned) thanks in part to a pair of solo home runs by Alex Rodriguez.

Sabathia, meanwhile, has been dominant in his last three starts, striking out 33 in 22 2/3 innings, including 11 and a career-high 13 in his last two starts, allowing just one run in those three games for a 0.40 ERA. CC hasn't faced the Rays since his two battles against David Price last September. CC was awesome in the first, at the Trop (8 IP, 2 H, 0 R, 2 BB, 9 K), but got roughed up in the second back in the Bronx, opening the door for the Rays to take the division.