While the rest of Yankeeland was attuned to the impending returns of Phil Hughes and Derek Jeter at the respective expenses of Ivan Nova and Eduardo Nunez, I spent the past week wandering around Switzerland on a family vacation to celebrate my father's 70th birthday. The Yankees weren't far from my mind, however. For one thing, the U.S. dollar's exchange rate against the Swiss franc is so poor that it feels as though one is paying Yankee Stadium prices everywhere: $5 for a bottle of water, $7 for a Coke, $10 for a sausage or a sandwich or a beer. If you want a sit-down meal, prepare to pay Legends Seat prices. If you want a ride to the best spot from which to view the Matterhorn... well, let's just say you could buy a pretty good shortstop for that kind of money.

Via MLB.tv, I caught parts of a couple ballgames, including Bartolo Colon's six scoreless innings against the Mets in his own return from the disabled list. Somewhere around the fifth inning, I was struck with a revelation.

While walking around the gorgeous city of Zurich a couple of days earlier, I had come across two separate reminders of artist Shepard Fairey's two-decades-old street art "experiment in phenomenology," namely the Andre the Giant sticker/poster campaign, which was big back during my college years in Providence, Rhode Island. In its original form, Rhode Island School of Design student Fairey distributed homemade stickers depicting a fuzzy, nth-generation image of oversized — and sadly deceased — professional wrestler (né Andre Roussimoff) with the inscription "ANDRE THE GIANT HAS A POSSE 7' 4", 520 lb."

The stickers were something of a viral marketing phenomenon; they turned up in just about every major city, first around Providence, then up and down the East Coast, and finally all over the country and even the world, plastered on lampposts, bathroom walls, record store windows, and other places where hipsters fearlessly tread. The joke was that Fairey wasn't marketing anything but the phenomenon itself, in an effort to see how far the mysterious image would spread and the ways in which it would be interpreted. Some viewed the face of the wrestler as menacing, almost mug shot-like; others were reminded of the gentle giant's pleasant turn as Fezzik in The Princess Bride, a role which added to his pop cultural cachet.

Following both the threat of a lawsuit and the opportunity to create a more formal brand — or to sell out, depending upon how you look at it — Fairey brought out his Obey Giant line of prints, clothing and collectables. Years later, he would come up with an even more effective and controversial viral marketing effort, namely the Obama Hope poster, the original of which is now in the Smithsonian Portrait Gallery.

What does this have to do with the price of baseballs in continental Europe, you ask? Well, having stumbled upon one old-school sticker on a Zurich street lamppost and then a weathered "Obey" poster on the front door of a clothing shop, I was suddenly struck by the resemblance between the wrestler and the burly hurler. With apologies to both individuals and to the artist: 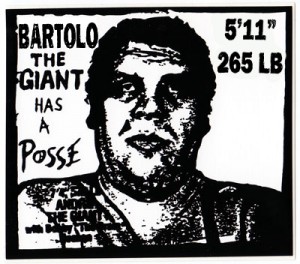 To the Xerox machine!

Sorry, just had to get that out of my system while working on the jet lag. Never let it be said I did any baseball analysis on this particular vacation...