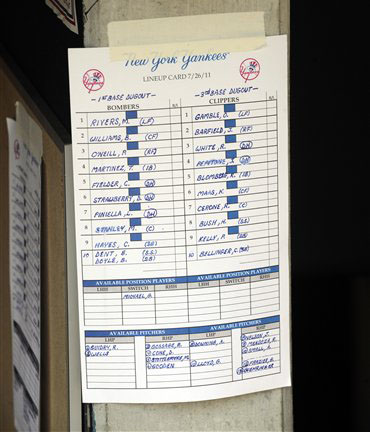 The bigger question is when Jeter should start appearing in this lineup. (AP)

There seemed to be some controversy surrounding whether or not Derek Jeter would start tonight's series finale in Cleveland given that he's now four hits shy of 3,000 and the Yankees open a quick four-game home-stand on tomorrow. The issue being that everybody involved, including Jeter, wants him to get that milestone hit in the Bronx, but putting individual accomplishments ahead of what's best for the team is both bad form and in direct opposition to Jeter's carefully honed reputation. Well, that's all moot now that Joe Girardi has announced that Jeter will indeed start at shortstop and leadoff tonight, but the interesting thing is that it was moot before that announcement as well.

We can debate all day the relative merits of starting Jeter or Eduardo Nuñez at shortstop, which gives you some idea as to how much the Yankees would actually suffer from sitting Jeter for a night. To this point in the season, Nuñez has been more productive at the plate, posting a .271 True Average (roughly defined as his rate of total production) to Jeter's .250, but then the sample size for Nuñez is tiny (126 PA), and for all of the criticisms lobbed at Jeter's range, Nuñez's play in the field has been just as problematic due to his alarming rate of errors. Yes, the Yankees got on just fine without Jeter during his stint on the disabled list, going 14-3 with Nuñez as their starting shortstop, but that had more to do with the rejuvenation of Nick Swisher and Jorge Posada and other such strong performances elsewhere on the roster than it had to do with Nuñez himself. Well, except for his last two games against the Mets. Nuñez hit .255/.309/.353 in Jeter's first 15 games on the DL, then went 7-for-8 with four extra-base hits against the Mets.

Still, the point is that which of those two players starts at shortstop in a given game isn't going to have a huge impact on the team's chances of winning that night. The gap just isn't very large, no matter which of the two you think is more valuable. So, in that sense, sitting Jeter would have been defensible on paper, just not to the unwashed masses who would like to tell me where to stick that particular piece of paper.

It's actually tempting to go the other way and say that batting Jeter leadoff, as Girardi will do again tonight, is an example of putting the player before the team, but remember how well Jeter was hitting in the first inning earlier this this season? Well, the sample size since then has been tiny (just 13 first-inning plate appearances, and one of his hits in that span was that weak dribbler Tuesday night), so there's no strong evidence to say that has changed. Then again, the whole thing reeked of a small-sample fluke to start with. Still, given those splits, it's hard to argue that starting Jeter, leading him off, then finding some excuse to sub in Nuñez mid-game would be counter-productive.

Of course, subbing in Nuñez shouldn't be necessary. Jeter has had just two four-hit games all season. In fact, those have been his only games with three or more hits all season, and one of those four-hit games saw him get his fourth hit in the 11th inning in his sixth at-bat of the game. That leaves just his two-homer game in Texas as his only nine-inning, four-hit game of the entire season. Sure, it's baseball, anything can happen, and Jeter could certainly get four hits tonight. Then again, he's been useless against right-handed pitching for the last season and a half (.245/.307/.311) and is facing a righty sidearmer in Justin Masterson who is particularly hard on right-handed hitters (.189/.286/.233 this season).