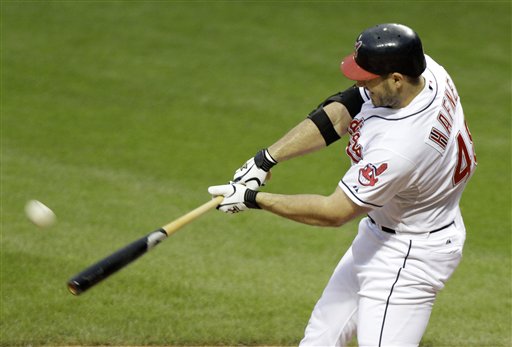 Travis Hafner's return from the DL has helped the Indians hold on to first place in the underwhelming AL Central. (AP)

The Indians looked like they were about to topple from first place in the AL Central when they visited the Bronx in mid-June. Indeed, the day after they left the Bronx, having dropped three of four to the Yankees, they lost to the Tigers and fell to second place for the first time since April 6. However, they have only spent five days out of first place since then and enter this series again a half-game up on the Tigers and in first place in the Central despite having played .370 ball in June.

Part of that is the Tigers failure to seize their opportunity. Since pushing the Indians into second place on June 14, the Tigers have gone 8-10, while the Indians have gone 9-8 (a record matched over that span by the third-place White Sox, who have also failed to take advantage of the Tribe's return to mediocrity). That's some thoroughly uninspiring play by the top 60 percent of the Central division, which makes it even more remarkable that the Indians and Tigers both have better records than the Rangers and Angels, who are tied atop the West. That sort of mediocrity seems to be contagious, as the Yankees have gone just 11-10 against AL Central foes thus far this season. However, the Central Division team against which they have fared best has been Cleveland, whom they outscored 24-9 in that four-game set in the Bronx in mid-June.

Since then, the Indians have called up 22-year-old third-base prospect Lonny Chisenhall, their top pick in the 2008 draft, and installed him at the hot corner, and gotten the rejuvenated Travis Hafner back from the disabled list. However, they have also lost Shin-Soo Choo to a broke thumb. Still, Choo was having a disappointing season prior to the injury, so the swap has been a solid upgrade for the Tribe, which has received a .318/.464/.636 performance from Hafner since his return. Chisenhall has only been up for five games, but he has a hit in every one. He's not a Mike Moustakas-level prospect, more of a .270/.340/.450-type bat with the potential to pop 20 home runs, but Jack Hannahan hit .182/.282/.255 in May and June, so Chisenhall should be a clear upgrade even if he has some growing pains.

As for the Yankees, they have two major pieces returning from injury in this series, as well. Derek Jeter will return tonight to play shortstop, bat leadoff, and resume his pursuit of 3,000 hits (he need six more), pushing Eduardo Nuñez back to the bench (and, it seems safe to assume, Ramiro Peña back to the minors) after a red-hot Mets series and breaking Steve's heart in the process. Phil Hughes will return to make the start on Wednesday, likely pushing Lance Pendleton or perhaps Hector Noesi back to the minors having already bounced Ivan Nova from the rotation (see below). Jeter returns after a brief and uninspiring two-game rehab stint with Trenton that, unfortunately for Jeter's carefully maintained dignity, fell on Independence Day weekend (and the humiliation continues tonight with those bush-league "stars and stripes" caps). Hughes, returns after a strong, three-start rehab stint that thankfully skirted any such wardrobe shenanigans.

I knew the Yankees didn't have the cojones to bounce A.J. Burnett from the rotation when I wrote this, but I am no less disappointed to be writing another Burnett comment for a team that just punted Ivan Nova from the rotation. Again, my protest isn't that Ivan Nova is a future star, but that he had been doing a good job of growing on the job such that he had been more effective than Burnett for the last two months, and I see more value in exploring Nova's potential, however limited, than going back to the well with Burnett, who's best days not only weren't very good, but are clearly behind him. Nonetheless, money talks, and here we are.

Burnett's well-timed quality start against the Brewers on Wednesday gives him an opportunity to turn in consecutive quality starts for the first time all season with such an outing tonight. There's a solid chance that he'll do it, too, as his mid-June start against the Indians at the Stadium was arguably his best start of the season (7 2/3 IP, 5 H, 1 R, 1 BB, 8 K). To be completely fair to Burnett, he has posted a 3.08 ERA in his four starts dating back to that one, missing a quality start in one by just two outs and in another by just one run, and his strikeout rate over those four outings bounced up to 8.5 K/9, so maybe A.J. will validate the decision to keep him in the rotation, but I'm not holding my breath.

Here's some of what I wrote about Tomlin in my previous Indians preview:

Tomlin, 26, is a soft-tossing righty who made his major league debut with seven strong innings (3 H, 1 R, 0 BB) against the Yankees late last July. Tomlin nearly matched that performance exactly in his season debut against the Red Sox this year and ran off eight more quality starts in a row after that with the aid of a .175 BABIP. . . . Balls in play are a huge part of Tomlin’s game, because he strikes out barely more than five men per nine innings and is leading the AL in walk rate [still true, now down to 1.1 BB/9]. He’s also a fly-ball pitcher with an 88-mile-per-hour fastball and no real out-pitch (though he can miss bats with his cutter and curve).

After those first nine starts, Tomlin hit a rough patch in which he went 1-3 with an 8.61 ERA over four starts due in part to a massive correction in BABIP (.424 over that stretch). His previous start against the Yankees (5 IP, 12 H, 6 R, 0 HR, 1 BB, 2 K) was the last in that stretch. Since then, his luck has returned. In his last three starts, all against National League competition (though not in NL parks), he has gone 2-0 with a 2.70 ERA thanks in part to a .224 BABIP.

Carrasco, a former Phillies prospect acquired in the 2009 Cliff Lee trade, has been sharp in his last five outings, going 4-1 with a 0.98 ERA, 0.74 WHIP, and 5.6 K/BB while averaging 7 1/3 innings per start. Again, luck on balls in play has helped (.192 BABIP), but Carrasco is getting ground balls and walking no one, and before facing the Diamondbacks in homer-happy Chase Field in his last turn had allowed just one home run in his previous five starts (35 2/3 innings). Included in that hot streak were seven scoreless innings against the Yankees in the Bronx (five hits, all singles, three walks, seven Ks). The 24-year-old righty  pitches off a pair of low-90s fastballs, mixing in a changeup, curve, and slider, the last of which misses a lot of bats. Even during his recent hot streak, his strikeout rate has hovered around league average, but he doesn't hurt himself with wildness or fly balls.

CC Sabathia's last two starts speak for themselves: 15 2/3 IP, 13 H, 1 R, 3 BB, 22 K. That translates to 2-0 with a 0.57 ERA, 12.6 K/9, and 7.33 K/BB. Not only that, but he also induced nearly twice as many ground balls as fly balls over those two starts and his opponents only manged to hit .224 despite a .361 average on balls in play. That's a good illustration of why strikeouts are so important (not that there are many non-believers out there): it doesn't matter if your opponents have great luck on balls in play if you don't let them put the ball in play very often. As Crash Davis said in Bull Durham, strikeouts are fascist, which fits the Yankees' organizational culture and, one could argue, means they make the trains run on time.

Hughes is back after a week shy of three months on the disabled list with what was ultimately diagnosed as shoulder inflammation and fatigue. Your guess is as good as mine as to what to expect, but the returns from his minor league rehab assignment, which consisted of one start for short-season Staten Island and two for Double-A Trenton, were impressive: 1.93 ERA, 1.00 WHIP, 11.6 K/9. In his final rehab appearance, last Wednesday, Hughes went 6 1/3 innings allowing one run on three hits and two walks while striking out eight. Per Hunterdon County Democrat beat writer and master blogger Mike Ashmore, Hughes threw plenty of cutters and curves in that start (though no mention of the changeup), sat around 92 miles per hour with his fastball, and hit 94 on the gun. He only threw 88 pitches in that start, so the Yankees might hold him to a hard one-hundred-pitch limit in this game, but otherwise, he appears ready to go, and the Yankees and Hughes are hopeful that he can start his season anew with as much optimism as he had coming into spring training.

Masterson you'll remember as the sidearming righty who was so effective in middle relief for the Red Sox. Sent to Cleveland in the Victor Martinez trade at the 2009 non-waiver deadline, Masterson has been something like Cleveland's ace this season, or was prior to Carrasco's surge. He's not a true front-of-the-rotation arm, but the 26-year-old's sinker/slider combo generates a good number of groundballs, he keeps his strikeouts close to league average, and, like Tomlin and Carrasco, he doesn't hurt himself with wildness. The sinker and his four-seamer come in around 92-93 mph, the slider is a bout ten miles per hour slower and misses bats, and while lefties do see the ball better against him, they're not killing him (a high BABIP has inflated their average to .306, but, again, he doesn't walk many, and they're only adding 111 points of isolated power to that, well below the league average of 144). Over his last five starts, four of them quality, he has posted a 1.85 ERA and allowed just one home run in 34 innings.