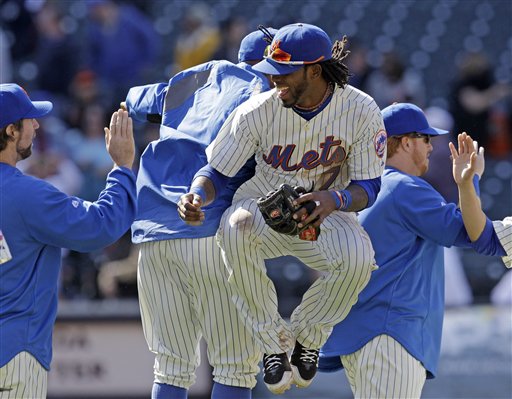 Shot down in April, Jose Reyes and the Mets have been flying high since May. (AP)

Since starting the season 5-13, the Mets have gone 36-27 (.571), a winning percentage that, over the full season, would put them in first place in the Central and Western divisions of either league and in second-place in either Wild Card race. Prior to running into Justin Verlander Thursday afternoon, the Mets had won six of their last seven, four of those coming against first-place American League teams, and in the four games prior to facing Verlander they scored 52 runs (an average of 13 per game).

So the Mets, despite recent appearances, are no laughing matter. Jose Reyes is having an MVP-quality season. Carlos Beltran has come all the way back, at least at the plate. Angel Pagan has hit .325/.398/.444 since coming off the disabled list in late May. Ronny Paulino has put up similar numbers in wrestling the catching job away from sophomore Josh Thole. Jason Bay has hit .327/.389/.490 over the last two weeks and has become a Russell Martin-like stealth threat on the bases having stolen eight bases in nine attempts this season, including four in as many tries in those last two weeks. As you'll see below, the three starting pitchers the Yankees will face in this series, Jonathan Niese, Dillon Gee, and R.A. Dickey, have all been pitching well of late.

Those performances may not all sustain themselves, but at some point the team is going to get David Wright and Ike Davis, who was off to a great start, back from the DL (though, to be honest, neither has shown significant progress in their rehabilitation from a stress fracture in the lower back and an apparently severe ankle sprain, respectively), and there's some hope for a return from Johan Santana as well (though again, he's not close right now). Then again, Reyes and Beltran, both in their walk years, could both be on other teams by August 1.

The plot thickens, and this series, set in New York City's best major league ballpark (where the Mets have a losing record overall, but a .548 winning percentage since a dismal first homestand), should send interleague out in style for 2011.

Niese is a 24-year-old lefty who is coming into his own as a strong number-three starter in the National League. Since turning in a pair of duds in early April, he has posted a 3.00 ERA over 13 starts, eight of them quality, and has been the best starter in the Mets injury-depleted, patchwork rotation. A curveball pitcher, Niese throws his hook roughly a third of the time and mixes it with a trio of 90 mile-per-hour fastballs (mostly the four-seamer, but also the two-seamer and a cutter). He has a changeup, but only uses it a few times per game. He's not a dominant pitcher, but there's little not to like about him. His strikeout and walk rates are solid, he gets ground balls, and his success this season has had nothing to do with luck on balls in play. Yes, he's better against lefties than righties and in pitching-friendly Citi Field than on the road, but that's to be expected, and he dominates lefties (.206/.260/.278 thus far this season) without being killed by righties and hasn't allowed more than two earned runs in any of his last four road starts, including starts against the Rangers and Brewers, two teams who crush at home. Niese has never faced the Yankees before.

In his last four starts, Nova has struck out 6.4 men per nine innings and induced nearly twice as many ground balls as fly balls, which is a recipe for success in the fourth spot in the Yankee rotation. Having his best curveball and good use of his changeup have had a lot to do with that. There seems to be real progress being made here. The biggest question is whether or not he can sustain or even continue to build on it. Facing a National League lineup in a pitcher-friendly park like Citi Field is likely to work in his favor. Nova has a 3.12 ERA in his six road starts thus far this season, turned in a quality start in his last start against the Mets, and his best major league start was the only one he has made in an NL park, two turns ago at the Reds, no less than that league's best offense.

Colon will indeed return from the disabled list to start on Saturday, coming back without the benefit of any minor league rehab appearances. The Yankees say that's because his injury, a strained hamstring, wasn't to his arm, but it also seems like evidence that the Yankees realize they can't afford to waste any of Colon's remaining bullets. Given that his body seems built for little other than standing in one spot and throwing a ball, I'm not confident that he'll survive his first at-bat, but if he does, I don't see any reason not to expect him to pick up where he left off, which was as one of the best starters in the American League. Colon, who still qualifies for the ERA title despite his time on the DL, is sixth in the league in strikeout-to-walk ratio, tenth in strikeout rate, and second in pitches per plate appearance, meaning he is one of the most efficient and effective pitchers in the league, averaging 6 2/3 innings per starts, all the more important for a pitcher who seems to be playing on borrowed time.

Here's what I wrote about Dillon Gee when listing him third in the NL Rookie of the Year race in this past Monday's Awards Watch at SI.com:

Gee hasn't been the best rookie starter in the National League this year [Brandon Beachy has], but he has been the most successful. A command-and-control righty with a pair of 90 mile-per-hour fastballs, a solid changeup, and the occasional curve, Gee made five starts, all quality, last September, and a pair of spot-starts, both wins and one out shy of both being quality, in mid-April. He was then bounced to the bullpen for a couple of weeks until Chris Young's shoulder gave out, at which point he made what seems likely to be a permanent return to the Mets' rotation. Gee's first two starts in May were underwhelming no-decisions, but he followed them with a run of five straight wins during which he posted a 2.02 ERA, 0.84 WHIP, and 3.14 K/BB. He seemed well on his way to a sixth straight win and a fifth quality start in six turns in his next outing, but rain cut that start short after four innings of scoreless, one-hit baseball. He has had one bad start (his only loss this season) and one good since then, though his eight walks against two strikeouts in those two games are reason for concern. Gee seems capable of being a solid back-end starter, but his opponents hit just .213 on balls in play during that six-start stretch from May into June, and his outstanding record owes some debt to his strong run support (5.68 runs per game), so there's reason to expect some correction on both accounts.

Entering his first start against the Yankees this year, a dividing line which neatly bifurcates his season in to two 51 1/3-inning halves, Dickey was 1-5 with a 5.08 ERA and 4.9 K/9. He then held the Yankees to one run over six innings in the Bronx, striking out six. In his last eight starts, including that one, he has posted a 2.45 ERA with a 7.5 K/9. A change of fortune on balls in play has had something to do with that, but as a knuckleballer, Dickey has more control over his BABIP than most pitchers (who have, essentially, none), and the big up-tick in strikeouts proves that it's not just Dickey's luck that has changed. He's not doing anything differently. He still has the same 4-to-1 knuckleball-to-four-seamer mix. He's not throwing a third pitch. He's not throwing appreciably harder or softer. His walk rate hasn't really changed much. Still, the Dickey the Yankees are likely to see on Sunday should greatly resemble the one who handed it to them back in May, so figuring out what changed isn't really on their list of things to do.

Seven of Garcia's last eight starts have been quality, and in his last four, all quality, he has gone 3-1 with a 2.08 ERA and has not allowed a home run, the last of which seems unlikely to change at the homer-suppressing Citi Field.