To the Mats with Reader Comments

Share All sharing options for: To the Mats with Reader Comments

I haven't had a chance to do this in a long, long time. I'm working off the comments in yesterday's Daily Nunez post:

Thirty-seven percent of all articles Steve now writes are about Derek Jeter. Sad. Jeter was once a great short stop, and Steve Goldman once used to write interesting articles. All good things… (RobMer)

Thirty-Seven is Casey Stengel's number, and I'm always happy to be associated with it. In any case, it seems to me that Jeter's impact on the 2011 race, the impact of his chase for 3000 on Joe Girardi's decisions, and his impact on the future of the franchise given his everlasting gobstopper of a contract is THE story this year, and it's what I'm interested in more than anything else. Paraphrasing Abraham Lincoln, Jeter, in how the rest of his season plays out, shall nobly save or meanly lose the 2011 pennant. And then 2012 as well. Also, 2013. Maybe 2014, even, given the contract option, but I very much doubt it. I will endeavor to be more "interesting" to you in the future (a dirty word, interesting, in my dictionary), both here and at Baseball Prospectus, where yesterday I compared the way the Mariners intend to watch Michael Pineda's pitch counts to the hamfisted Joba Rules.

You are losing it, my friend. You are putting your credibility at risk with such venomous posts. Check your self, bro. Nuni isnt even that much better considering sample size.
8 Errors in 20 games started, YES! This is pure hatred. Did Jeter date someone close to you or something? (Al) 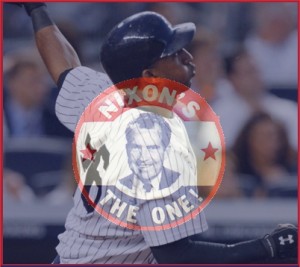 Nunez may not be "the one" anymore than Nixon was. As I have written many, many times, I don't believe he is the shortstop of the future, first because his bat will ultimately prove to be inadequate, even in these times in which few teams have shortstops (and that's going to get worse--look at the minors) and his glove may be too inconsistent as well, as evidenced by all those errors. Yet, I have been intrigued by what has been happening these last two weeks, not because I hate Jeter--I don't hate any ballplayer; I don't think that way. Hate is an extreme emotion and no ballplayer deserves that for trying his best and failing (nor for trying his best and succeeding for the Red Sox or any other rival--it's just a game, kids). Even if I did, no true baseball fan could hate Derek Jeter. What I dislike is having to watch his decline phase and be told night after night that he's still a special performer and that his search for 3,000 hits--a personal, not a team goal--has anything to do with winning another championship.

Now, if the old fellow comes back and hits .350 the rest of the way, I will watch as happily as anyone else, but I don't think it's going to happen, and even if it does, it's not going to happen again next year. As such, Colonel Tillinghast L'Hommedieu Huston, we have a problem, and I am very interested to see what solutions and alternatives present themselves. And I am amused, giddy even, at the idea that Nunez, whose starter possibilities I had mostly written off, might exceed my low expectations. That's not hate for Jeter; it's enthusiasm for Nunez. I'm sorry if I offended you by liking someone else. Last I checked, I'm married to my wife, not Derek Jeter, and while I might have taken her forsaking all others, I don't recall making a similar vow where Jeter is concerned.

Parenthetically, despite all of Nunez's errors, Yankees pitchers are allowing fewer runs than they did when Jeter was around. Think about this: Nunez's occasional errors are not equivalent to Jeter's lack of range. Maybe Nunez makes an error every two games, but Jeter let's a grounder or two go by him every day. If you called the balls that an average shortstop would reach but Jeter just waves at "errors," you wouldn't be able to find his fielding percentage with a bloodhound and a microscope. Nunez is throwing more balls away, but he's also getting to more balls overall. So far, the tradeoff has worked in the Yankees' favor.

From what I gather by reading scouting reports and general opinion around the game, Nunez tops out as a solid all-around shortstop on both sides, a decent defender with a bat that’s good enough to start, almost certainly (for the Yankees at least) batting 9th. At absolute best, I think they’ve got a guy who’s slightly above league average for a SS. The crux of the argument, however, is that the days of young ARod, Jeter, Nomar and Tejada are long gone, and that’s the best you can hope for in the forseeable future, unless your shortstop is named Tulo, Hanley or Elvis. There simply aren’t any other options out there but a 9-hole hitter who can hopefully hit an empty .290. (Jesse From NY)

That's exactly right, and it's why I keep looking forward to solutions instead of back to the past. Because apres Jeter comes not le deluge but le desert. Like global warming, that future is knocking on the door now, not five or 50 years from now, and it's not too soon to worry obsessively about filling the position. Keep in mind, as dry as the shortstop position is around baseball, it's not so dry in the AL East. The Orioles will likely have J.J. Hardy for awhile, followed by Manny Machado. The Jays have secured Yunel Escobar. The Red Sox have patched decently with Jed Lowrie and Marco Scutaro, and even if Jose Iglesias proves to be a poor hitter, he is reputed to be an outstanding defender. That leaves the Yankees and the Rays on the outside looking in--and the Yankees don't have a shortstop prospect as good as Tampa's Hak-Ju Lee. Earlier this week, my BP colleague Jason Park said of him, "The total package could be an All-Star with a plus glove, the ability to hit for a very high average (not empty average), and enough strength to work the gaps."

As such, it's not such a bad thing if Nunez stakes a claim to the position in the future. Unfortunately, that's just not a priority right now, not for the Yankees, not for many fans. Jeter wasn't going to get Wally Pipped even if Nunez had hit .500 and fielded flawlessly, because the history and the 3000 hits thing is more important for some reason. I have great respect for that history, but yesterday is gone, and if you're going to toss away a pennant race on a player's quest for self-aggrandizement, you might as well dig Babe Ruth out of the ground, prop him up at home plate, and see if he can pick up the 49 home runs he needs to reclaim the all-time lead from Barry Bonds.

Again, I don't think that much of Nunez's chances, but as Jesse here points out, in this era, an empty .290 from your shortstop ain't bad. Rooting for that possibility isn't disloyalty to Derek Jeter, it's loyalty to the idea of a winning Yankees baseball team.

Man, that felt good. I missed doing that! The Pinstriped Bible: Going to the Mats with Reader Mail since 1999 and loving it.