Just the Right Amount of Homers

Share All sharing options for: Just the Right Amount of Homers 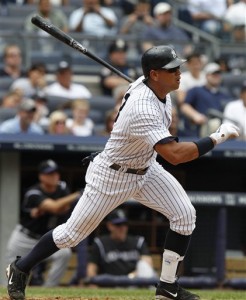 For Alex Rodriguez as well as the Yankee lineup as a whole, the hits have been falling in even as the balls have been staying in the yard. It's all good. (AP)

The Yankees continued to pound the ol' pill on Tuesday night, beating up on Zack Greinke and the Brewers 12-2 as the enigmatic ace was done in early by both his defense and his offense. In the first inning, center fielder Nyjer Morgan slipped in pursuit of what became a Curtis Granderson RBI triple, proving that it's tough to swim to the ball while lying on the grass, and leading to a two-run, eight-batter, 27-pitch inning for poor Greinke. He didn't get much of a chance to collect himself before he was back on the hill, as the Brewers went down on just nine pitches against Freddy Garcia in the top of the second. Greinke got into trouble quickly in the bottom half when Eduardo Nunez singled and advanced to second on a wild pitch, followed by a Brett Gardner walk, and soon Nick Swisher's three-run homer applied the coup de grâce; Greinke was done after two innings, down 7-0.

Coupled with Cliff Lee's two-hitter over the Red Sox, the win gave the Yankees a 1.5-game lead in the AL East standings, their largest since the close of play on June 1. Their 13-4 jag since being swept by Boston has largely neutralized the Sox's own 14-2 run, in large part because they have beaten up on the Senior Circuit while the Sox... Not so much. The Yankees are 9-4 thus far in interleague play, outscoring their opponents by nearly two runs a game (71-46); by comparison, the Sox are 6-7 despite outscoring opponents by 18 runs (75-57). Dem's da breaks.

Swisher's homer was his fourth in eight games; he's now hitting .325/.441/.675 in June, with the latter two marks team highs. His overall line is up to .249/.370/.430, a bit better than the average AL right fielder's .265/.340/.428. Meanwhile, Mark Teixeira homered in his third consecutive game and his eighth time since the calendar turned, giving him 24 for the season; with Jose Bautista also going yard last night, the two sluggers remain tied for the major league lead. Tex is hitting just .221/.327/.547 this month, with a ridiculous .159 BABIP; his overall .214 BABIP is not only 84 points below his career mark, but the third-lowest mark of any batting title qualifier, ahead of only Dan Uggla (.188) and Chone Figgins (.211), neither of whom has the power to offset such rotten luck.

One player for whom the hits have definitely been falling in is Alex Rodriguez. His .342 BABIP is tops on the team and 26th in the majors. He's tearing it up in June (.341/.433/.598), more due to a .387 BABIP than his four homers. As Jack Curry pointed out before last night's game, A-Rod has gone 7-for-7 with two walks and a sacrifice fly in his last 10 plate appearances with runners in scoring position; to that he added another walk. As Curry later noted, that 7-hit streak ties Balitmore's Matt Wieters for the longest of the season.

What's particularly impressive is that Rodriguez has done this while playing through a right knee injury; he tweaked it running the bases against the Cubs on June 19. Including that game, he's on a 13-for-25 tear, with no homers but four doubles and a .565 BABIP. File under "not trying to do too much," and note that athletes are strange creatures.

One interesting thing to note while looking over the monthly stats is that the offense has become less reliant upon homers given their June performance. At the beginning of May, the Yanks were on a record-setting pace, deriving 55.5 percent of their runs via homers, a stat we keep at Baseball Prospectus called the Guillen Number. three weeks later, they were down to an even 50 percent, still the second-highest figure of the play-by-play era. Five weeks beyond that point, they're at an MLB-high 45.3 percent, which would rank a much less remarkable 17th in the play-by-play era, and second in Yankees history (the 1961 team had a 46.6 percent Guillen Number).

Not coincidentally, the team's BABIP has been rising, and at a faster rate than the league's numbers have, enabling the color to return to the stat lines of guys like Swisher and Posada, if not Teixiera:

That's a whole lot of regression to the mean going on in the BABIP and Guillen Number departments, yet another lesson in how April's outliers in either direction almost invariably come back to the pack to some degree, and how so much of that "Too Many Homers" handwringing was just wasted energy. Over the course of a 162-game season, these things even out. Like the Yankees themselves, sample size wins again.