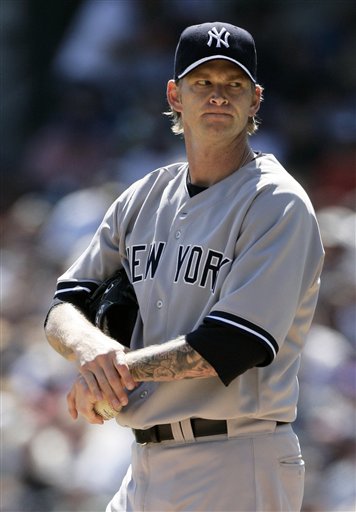 A.J. Burnett should be looking over his shoulder given his performance over the last season and a half. (AP)

Brian Gordon was skipped in the Yankee rotation with Monday's off-day and it sounds like Bartolo Colon will be ready to come off the disabled list and take his spot back against the Mets on Saturday. Meanwhile, Phil Hughes threw 88 pitches over seven innings, hitting 94 on the radar gun and struck out eight in a rehab start for Double-A Trenton this morning. So here's my question: if we assume that Colon returns to the form he showed before pulling his hamstring covering first base and nothing else on his body snaps any time soon (two big ifs, but go with me here), which member of the Yankee rotation loses his spot when Hughes returns?

I'm not trying to build Ivan Nova up into a front-of-the-rotation starter here, but I do wonder just how long we have to accept the fact that A.J. Burnett's hold on a starting job is a given. Don't tell me about the quality of his stuff or his strikeout rate relative to Nova's, Burnett has been disappointing with the same stuff and higher strikeout rates than his current 7.3 K/9 his whole career. The only meaningful difference between his performance this year and last, which was one of the worst full-season performances by a Yankee starter in the team's history, has been his luck on balls in play, which was bad last year (.323 BABIP), and has been excellent this year (.246).

If performance, and not the two and a half years and $41.25 million left on Burnett's contract, was the determining factor, Burnett and Nova would both be pitching for their jobs between now and Hughes' return, with Nova entering that competition with a small but clear lead based on how both have pitched over the last dozen starts (out of 16 total). That's before you factor in the fact that Burnett is 34 and likely in decline, while Nova is 24 and may continue to improve.

Meanwhile, doesn't Burnett's two-pitch mix seem like it would be ideally suited to the bullpen? Maybe working short stints allows him to add a couple of ticks to his fastball and he'll come snorting out of the pen throwing gas and breaking off absurd curves and can help fill in for the loss of Joba Chamberlain. It seems more likely that he'll just become even more like Kyle Farnsworth, but isn't less more in his case anyway at this point? I haven't even mentioned the fact that Burnett hasn't turned in consecutive quality starts since last August, while Nova has done so three times this season (okay, now I have).

Now, it's entirely possible that this problem will solve itself via an injury, an implosion, or a set-back for Hughes, and I'll admit to having it in for Burnett since before the Yankees signed him, but that was always based on his performance. Burnett threw a few big games in 2009 and has managed to stay healthy, save for his one door-punching episode, but in every other way he has lived down to my expectations as a Yankee. With everyone else in the rotation pitching well, don't the Yankees at least have to consider the fact that Burnett, who has a 4.52 career ERA as a Yankee (97 ERA+) might be the starter most deserving of a demotion?