Share All sharing options for: Series Preview: Yankees vs. Brewers 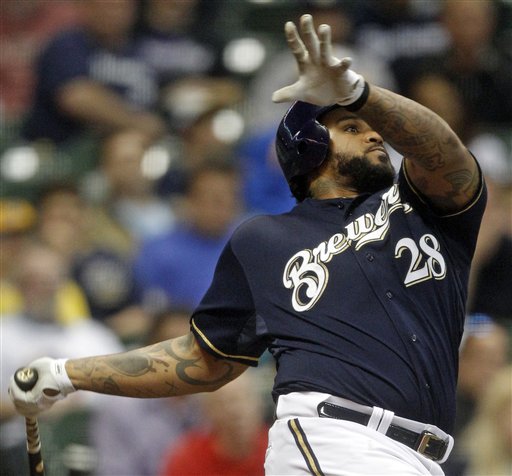 Prince Fielder is taking the Brewers, and opposing pitchers, for a ride this season. (AP)

The Brewers' plan this offseason was clear: facing Prince Fielder's sure departure as a free agent following the 2011 season, Milwaukee was going to go all-in for this season, trading what was left in an otherwise barren farm system to reinforce their rotation and make one last push to get their powerful offense into the postseason after breaking a 26-year playoff drought behind the pitching of the since-departed CC Sabathia and Ben Sheets in 2008.

So far, so good. Imports Zack Greinke, acquired from the Royals for center field prospect Lorenzo Cain and a trio of pitching prospects, and Shaun Marcum, acquired from the Blue Jays straight-up, for top prospect Brett Lawrie, have gone 14-4 thus far this season despite Greinke missing April with a cracked rib and suffering from poor defensive support since, and Marcum suffering from poor run support and a recent hip flexor strain.

Fielder, as expected, is having a monster season in his walk year, hitting .305/.426/.611 with 21 homers and 68 RBIs thus far and walking more often than he is striking out (thanks to ten intentional passes). Potential suitors would be wise to note how much Miller Park favors left-handed power hitters, but Fielder's .285/.400/.518 line on the road remains impressive.

The Brewers are also getting big seasons from Ryan Braun (.308/.390/.554, 16 HR, 59 RBIs, 17 SB) and second baseman Rickie Weeks (.290/.360/.498, 14 HR, 7 SB) as well as solid contributions from right fielder Corey Hart, catcher Jonathan Lucroy, and an unexpected one from center field import Nyjer Morgan. However, the left side of their infield, Casey McGehee and Yuniesky Betancourt, the latter of whom was the booby prize in the Greinke deal, has been brutal on both sides of the ball.

As a whole the Brewers are not a good defensive team, ranking 25th in the majors in park-adjusted defensive efficiency (the rate of turning balls in play into outs), but that's really the only thing they don't do well. Of the 21 teams within six games of a playoff spot entering Tuesday's action, only the Yankees and Brewers are solidly above their league's average in both run scoring and run prevention.

The Brewers have actually been slumping a bit of late, dropping seven of ten, including series losses to the Red Sox and Rays, before hosting the Twins over the weekend, but the Twins have been baseball's healers this season, and the Brewers swept them by a composite score of 21-6. Another factor in the Yankees' favor this week is that the Brewers have a dramatic home/road split on the season, going 29-11 (.725) at home, but just 15-24 (.385) on the road. The main culprit there is the offense, which has scored just 3.51 runs per game outside of Miller Park this year. That is particularly odd given the fact that the NL Central is filled with hitting-friendly parks such as those in Cincinnati, Chicago, and Houston, but the Brewers are just 3-10 in those cities this year and have won just three road series all season and just one, against the free-falling Marlins, who are 3-22 in June, since the end of April.

See Greinke's basic stats above? This is one of the rare times that I'm going to tell you to believe the record, not the ERA. Since returning from a spring training rib fracture at the beginning of May, Greinke has dominated in the strike zone, striking out 80 men in 60 1/3 innings against just nine walks, but has been undermined by his defense, which has allowed his opponents to hit a whopping .355 on balls in play. Fortunately for Greinke and the Brewers, those same fielders have turned around and given him 5.74 runs of support per 27 outs at the plate, giving him the record he deserves despite an ERA that's largely out of place given how well he has pitched. Though Greinke was a bit homer-prone in May, he has allowed just two taters in his last five starts. Still, a .353 BABIP has kept his ERA plump over that stretch at 3.90 (the NL average his 3.80). Five of Greinke's last six starts have been quality and he has struck out nine ore more men in each of his last three. He has yet to pitch in an AL park this season, but he won the Cy Young award in this league two years ago, so there's no reason to think his dominance is a product of his changing leagues this offseason. Greinke throws his 93-mile-per-hour four-seam fastball nearly half the time and misses a ton of bats with his slider and curve. He also shows a mid-80s changeup and the occasional two-seamer.

Since his stinker against the Red Sox on June 7, Garcia has turned in three quality starts with a combined 1.74 ERA and no home runs allowed. In fact, that one disaster outing was his only non quality start in his last seven turns.

Marcum's BABIP is nearly a hundred points lower than Greinke's, but he is also getting nearly two fewer runs per 27 outs of support from the Brewers lineup. He's also performing well in the strikezone, so I largely take his numbers above at face value. One reason for that is that his ERA has been inflated by a recent left hip flexor strain that forced him to leave each of his last two starts early. Prior to those two starts, his ERA was 2.68. The 2.95 above seems more like it. Marcum claims his hip is "a non-issue," will have had a couple of extra days of rest coming into this start, and won't have to worry about batting or running the bases in this game. Still, it bears watching.

With the Blue Jays last year, Marcum faced the Yankees just once and was touched up for five runs on eight hits, half of them for extra bases including an Alex Rodriguez homer, in six innings. A finesse righty, he throws his excellent 80 mile per hour changeup more than a third of the time and throws his fastballs in the high-80s. He mixes in a cutter, a curve, and the occasional slider, the last of which rivals the change as a swing-and-a-miss pitch.

Burnett's lack of consecutive quality starts this season will continue no matter what he does on Wednesday as he's coming off two starts that fell short of that designation and has just one quality outing in his last four turns (1-3, 5.04 ERA). He's still leading the league in wild pitches, though!

Veteran National League lefty Randy Wolf is having a solid season, echoing his strong showing for the Dodgers two years ago without relying as heavily on luck on balls in play. He has turned in 11 quality starts in 16 turns this season, including four straight coming into this start during which he has posted a 1.95 ERA and struck out 21 men against just six walks. One of those games came against the Red Sox at Feway park (7 IP, 9 H, 2 R, 1 BB, 3 K), which should silence thoughts of him turning into a pumpkin in the Bronx. Wolf mixes a couple of high-80s fastballs with a curve, slider, and change, none of which miss many bats nor generate an excess of ground balls. In a way, he's the Brewers' Freddy Garcia, but on a much larger contract ($29.75 over three years of which this is the second).