Something Old, Something New on Old Timers' Day

Share All sharing options for: Something Old, Something New on Old Timers' Day 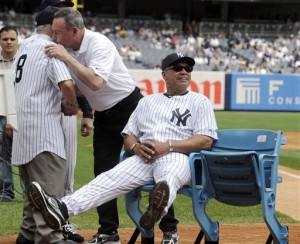 I spent a loooong Sunday at Yankee Stadium, arriving in the Bronx in time for the pre-Old Timers' Day press conferences hailing first-time participants Lou Piniella, Bernie Williams and Joe Torre and staying through the usual post-game routine. My writeup of the day is up at Baseball Prospectus.

The festivities involving some 50 former Yankees ranging from Hall of Famers to bit players, with a heavy concentration of the latter from the Torre era; the aforementioned trio received three of the biggest receptions, with Bernie getting the loudest ovation, Torre the longest one, and Piniella the most "Louuuuus," naturally. After the player introductions, the Yankees had head athletic trainer Gene Monahan throw out the first pitch to Jorge Posada, fully clad in the tools of ignorance for the first time all season. They then surprised Monahan, who is retiring after this season, his 49th of service, with a lavish load of gifts, not to mention the presence of his daughters and fianceé.

The Old Timers' Game itself had a few highlights, including Bernie's double, a warning track shot by Darryl Strawberry, and a two-run homer by Tino Martinez, which provided the three-inning game's only scoring. Viewing Old Timers' Day from the press box was a new experience, and not exactly as easy as I imagined:

Being in the press box for the pregame festivities required me to muster every ounce of my professional restraint not to applaud the old-timers for whom I have cheered so unabashedly from the cheap seats. "No cheering in the press box" means just that; this ain't no party, this ain't no disco, this ain't no fooling around. That didn't stop me from smiling warmly at most of the introductions, feeling goosebumps and maybe struggling with some kind of, um, localized dust storm when the ovations for Williams and Torre took hold. Throughout the festivities, I vented a bit of my adulation on Twitter, where some of my less well-versed followers were amazed that such a no-cheering strict edict was observed even for this noncompetitive occasion. That's part of the deal I've accepted with this card I've been dealt, and I have no complaints.

As for the game itself, the Yankees won 6-4 despite falling behind early and spend the first four innings unable to do anything at all against Juan Nicasio, the Rockies' rookie starter, although he was throwing almost nothing but fastballs. Their struggles against an unfamiliar pitcher had a familiar air, so I called upon the BP data elves for some help:

Despite winning 95 games and leading the majors in scoring, the 2010 Yankees found themselves easy prey when matched up against starters that they had never faced before, going 5-9 against a set of fresh faces that included not only pedigreed hard throwers like Clayton Kershaw and Max Scherzer but also less heralded soft-tossers such as Hisanori Takahashi, Kyle Kendrick, Sean O'Sullivan, Josh Tomlin, and Bryan Bullington. Those 14 first-timers posted a collective 3.29 ERA and yielded just under a baserunner per inning while baffling the Bomber bats, and getting a ridiculous amount of help from their defense. The Yankees did rough up the occasional first-timer, even good ones such as Hiroki Kuroda and Trevor Cahill, but compared to the way they devoured such Johnny Come Latelys in 2009, the difference was striking.

Though the likes of Philip Humber and Carlos Carrasco have baffled this year's Yankees in recent weeks, the 2011 squad has been marginally less forgiving of these newcomers, although they've still struggled relative to the rest of the slate, considering that they're pumping out 5.25 runs per game:

Nicasio looked as though he might be part of a larger trend as he kept the Yankees at bay with a nearly all-fastball diet. Of the 58 pitches he threw to the first 12 hitters, 52 were four-seam fastballs according to the MLB Gameday data. He wasn't exactly efficient, getting just three first-pitch strikes out of 12, going to five three-ball counts, and averaging nearly five pitches per batter. He wasn't exactly dominant either, striking out just two and generating four swinging strikes. Yet he was unscathed, as the Yankee lineup couldn't touch his heater, which reached 97 MPH and dipped lower than 92.4 just once during that stretch.

Nicasio retired Alex Rodriguez on a one-pitch at-bat (another fastball, of course) to start the fifth, but then the trouble began. He yielded a sharp Robinson Cano single to left center field, and fell behind 3-0 to Nick Swisher, who's been riding a hot streak (.316/.433/.632 in June) following a frigid start. After fouling off the 3-0 pitch (yup, fastball), Swisher drilled a two-run homer to right field, cutting a 3-0 lead to 3-2. Four pitches later, the Yankees tied the game on Jorge Posada's 419-foot solo homer to right center field. Can open, worms everywhere, and yet Nicasio still hadn't thrown an offspeed pitch during the inning. He threw four—three sliders and a changeup—to Russell Martin and Eduardo Nunez to escape the inning, but when he returned to the four-seamer once the lineup turned over, allowing Brett Gardner and Curtis Granderson to reach base, his day was done. Two batters later, reliever Matt Belisle yielded an RBI single to Rodriguez, scoring Gardner and re-tying the score.

Here it's worth noting that others have taken a look at fresh faces against the Yankees and gotten different results using different criteria. William J. at the Captain's Blog found that if you're looking at relatively inexperienced pitchers facing them — those with 60 or fewer starts in their career — the Yankees have actually beaten them pretty handily over the past decade. Meanwhile Sean Forman (the Baseball-Reference.com founder) wrote at the New York Times about how pitchers facing the Yankees for their major league debuts — as Josh Tomlin had then just done — had enjoyed an inordinate amount of success from 2000-2010. So it depends on how you frame the question, and what you focus upon. In my study, the Yankees have struggled against the newcomers, in large part because those pitchers have gotten exceptional, unsustainable support from their defenses.

I did ask Joe Girardi about the phenomenon in the postgame press conference, and when I cited the now-familiar names like Bryan Bullington, Sean O'Sullivan, and Kyle Kendrick, he interrupted playfully, "That would have been last year," before going on to laud his lineup for its adjustment to Nicasio. Which, as Swisher detailed, mostly involved waiting for his velocity to taper off the second or third time though the order: "Early, if you look up at the gun, he was consistently 95-96, and then it started getting into the third, fourth, fifth inning, his velocity started dropping to 92-93... When you haven't seen a guy before, obviously, everybody in the league has a fastball, so that's the one thing you try to key on."

Pursuant to last week's discussion of his recent turnaround and the less-than-cerebral way he discusses hitting, Swisher offered a fairly entertaining if evasive answer when I asked what had changed for him: "You get in those situations where you're down there around the twos [.200s]. With my personality, you can't be grounding out and laughing and smiling and stuff. Then once you get a couple base hits, you can start to be yourself again. I feel like I'm getting back to myself."

One other highlight of my day was asking questions of Lou Piniella and Joe Torre in the pregame press conferences, something I arrived on the scene too late to do while they were still managing, and therefore on my to-do list. I asked the latter about one of the day's absent Yankees, Don Mattingly, and the obstacles he's dealing with in his job managing the Dodgers.

"I speak to him once in awhile," he said. "When I call, he says 'What'd I do wrong?' I think we have to relate to our own experiences and I know when I started managing the Mets in '77, my first course of action was trading Tom Seaver two weeks later, which certainly wasn't a lot of fun and wasn't very popular to do.

"Your first managing job is really exciting, and I know Donnie is all over it. Not to say that he's not gonna — I don't wanna say struggle — but have an emotional rollercoaster going, especially with what's been going on out there with the franchise," he said, referring to the ongoing saga of Frank McCourt's ownership, given that the team's day-to-day operations are now being overseen by MLB due to questions about McCourt's finances (he filed for bankruptcy protection today). "His team started out well and they're playing hard for him, it's just that they've been beat up pretty good. But he's doing fine, the players have responded to him. I've been out to his ballpark a number of times. He seems to be in good spirit, but there's been a lot of frustration lately."