Share All sharing options for: Series Preview: Yankees vs. Rockies 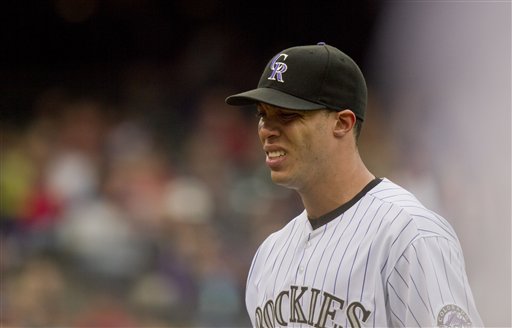 Ubaldo Jimenez's struggles thus far this season have been emblematic of the Rockies as a whole. (AP)

The Rockies were the National League's Wild Card entry in 2009, and have been popular pre-season playoff picks each of the last two years. Just using the SI.com experts' picks, which I participate in, seven of 13 writers picked the Rockies to make the playoffs last year, and six of 12 picked them to make it this year. I didn't pick them either year, but I could see where those picks were coming from heading into 2010. Heading into this year, however, I couldn't.

I authored the Rockies chapter in Baseball Prospectus 2011, and one point I make roughly half-way through the essay is that, given the 2010 performances of Ubaldo Jimenez, Carlos Gonzalez (third place in the Cy Young and MVP voting, respectively), and Troy Tulowitzki (a record-setting September home run barrage), "the inability of a team that made the postseason the year [before] to convert those performances into more than 83 wins is fairly convincing evidence that work remains to be done on this roster."

However, as the "who's replacing whom" portion of my roster breakdown below shows, the Rockies didn't do much work on their roster over the winter at all, focusing instead on keeping their pieces in place by giving monster extensions to Tulowitzki (now signed through 2020 for a total of $157.75 million plus a 2021 club option) and Gonzalez (signed through 2017 for $80 million), and re-signing hard-throwing lefty starter Jorge De La Rosa (a comparatively modest two years, $21.5 million plus 2013 player option, which, if activated, would bring a 2014 club option into play).

As talented as Tulowitzki and Gonzalez are, and as encouraging as those extensions might be to the Rockies' players and fanbase, those are problematic and potentially disastrous contracts in line with the nine-year, $141.5 million deal the team gave Todd Helton way back in 2001, which they confusingly extended prior to last season. De La Rosa's, meanwhile, has already blown up in their faces as he underwent Tommy John surgery exactly three weeks ago, wiping out the equivalent of at least one of his two guaranteed years. Beyond the potential for Tulo or Cargo to suffer career-altering injuries (and Tulowitzki has already proven rather fragile, suffering significant injuries in two of the last three years) or to simply fail to build or even repeat on their 2010 success (and both have seen their production drop thus far this year), those contracts consume a large portion of the potential payroll of a mid-market team that typically adheres closely to its budget, making it difficult for them to upgrade elsewhere.

The other issue is that the Rockies' 2010 roster, beyond those superstar performances, was largely stocked by players who were decidedly average, which made upgrading difficult, as it would take a true star to effect a meaningful upgrade over a league-average place-holder as opposed to a replacement-level killer, who sets the bar for an upgrade much lower. Really, the Rockies' only opportunity to make meaningful upgrade without making a blockbuster deal was second base, and there their solution was to sign Mariners' cast-off Jose Lopez and make him duke it out with a trio of in-house candidates. The results thus far: Lopez lost the job six games into the season and ultimately hit his way off the team, earning his release in earlier this month, and the team's second basemen as a whole have hit just .248/.301/.337, compared to the major league average for second basemen of .251/.312/.371. The position is currently being staffed by fragile 25-year-old prospect Chris Nelson, who has slugged .462 in 68 plate appearances, but with just two walks and a .279 on-base percentage.

Seeing the Rockies punt their one opportunity for an upgrade was disappointing, and that has been the theme of this year's team. Jimenez, who had made steady improvement up through his star turn last year, was hurt, then ineffective, and is still trying to find his groove with the season nearly half over (details below in the pitching matchups). Tulowitzki had a big April, but has hit just .262/.312/.424 since. Center fielder Dexter Fowler, who had a strong second-half last year after a brief demotion in June, is back in Triple-A, where he has been reunited with third baseman Ian Stewart, who has managed just three hits in 47 major league at-bats this season and was thus unable to keep 33-year-old journeyman Ty Wigginton from taking his job. Veteran groundballer Aaron Cook, has once again spent more time on the disabled list than on the mound, and I already mentioned De La Rosa's season-ending surgery.

On the positive side, while Gonzalez didn't really start hitting until mid May, he has hit .322/.371/.539 in 167 plate appearances since and is playing an outstanding center field in Fowler's stead with rookie Charlie Blackmon filling in nicely in left, even if his production thus far has been all batting average. Todd Helton, now 37, has again risen from the dead, and the team has received 17 home runs from their first basemen with Jason Giambi popping seven taters in assorted fill-in and pinch-hit duty (Wigginton, who has hit nine jacks himself, has contributed to that number). Seth Smith has been the team's best hitter as the strong side of a right-field platoon. Embattled former catching prospect Chris Iannetta, now 28, still isn't hitting for average (.229), but he's leading the team in walks and has hit for enough power to be a substantial contributor, particularly given the low standard for his position. The bullpen has been solid, 23-year-old sophomore right-hander Jhoulys Chacin has been among the best starting pitchers in the league, albeit thanks to considerable luck on balls in play, and former Devil Ray Jason Hammel is holding his own as a league-average innings-eater.

So, once again, some good, some bad, and a perfect .500 record coming into this series, including .500 records both at home and on the road despite the usual gigantic splits in run production home and away (read the BP essay). That's about what I expected from the Rockies this year, even if I expected the good and bad to come from different places. The Rockies do enter this series relatively hot, having won their last three series and six of their last eight games, but the recent play of the Indians, Padres, and even the Tigers, their three opponents over that stretch, has been less than inspiring.

A lacerated cuticle sullied Jimenez's season debut and put him on the disabled list for most of April. When he returned, he was wild, inconsistent, and generally ineffective for four starts (6.27 ERA, 9.1 BB/9), but has started to round into form over the last month, posting a 3.42 ERA and a 3.36 K/BB (with just 2.1 BB/9) over his last seven starts despite poor luck on balls in play. Still, he gave up six runs in one of those starts and failed to complete the sixth inning in either of his last two turns, the last because of a cramp in his right calf. He has also been the victim of poor run support, receiving just 3.77 runs per 27 outs from the Rockies offense despite making the majority of his starts at home. In fact, Jimenez has earned the win in just one of his five quality starts this season, and he had to pitch a shutout for that W.

Compared to his dominant stretch early last year, when he was mostly two-seamer, slider, changeup, Jimenez has been throwing far more four-seamers and splitters of late, largely at the expense of the two-seamer, and his average velocity is down a couple of ticks on the fastballs and changeup. Accordingly, his groundball rate has diminished a bit, and his strikeouts are down a bit overall, with most of his swings-and-misses coming on the slider and change.

A.J. Burnett still hasn't put together consecutive quality starts, but he looked sharp in each of his last two outings, striking out 16 men in 13 innings against just four walks and one home run. Still, inefficiency, too many baserunners, and a close score led to his getting the hook with one out in the sixth his last time out.

Here's Aaron Cook in a nutshell: he missed a month last year with a sprained big toe, then in his second start after returning, Joey Votto lined a comebacker off his shin and broke his right leg. His leg healed over the winter, but he arrived in camp with shoulder inflammation, then got the ring finger of his pitching hand caught in the front door of his house, breaking the top digit and wiping out the first two months of his season.

He returned on June 8 and has made three starts since, failing to distinguish himself in any of them. A pitch-to-contact groundballer who works with a typical 80-something mile per hour sinker/slider combo, the 32-year-old didn't induce an excess of contact (thanks to a few too many walks, a problem that reared it's head last year prior to his toe injury) or ground balls in those three starts, so it probably helped that two of them came against the Padres.

Sabathia didn't turn in a quality start in any of his last three outings and is flirting with a career-low strikeout rate. However, he's keeping his K/BB in line with the last two seasons thanks to a low walk rate and is tied for the league lead in wins thanks to a megaton of run support (7.04 runs per 27 outs!). He has also averaged more than 7 2/3 innings per game over his last seven turns, so while he's not dominating, he's still the Yankees most valuable starter, not that there's much competition for that title.

Then again, in Nova's last 11 starts, he has gone 6-2 with a 3.31 ERA, and seven of those 11 starts were quality, including three of his last four. More encouragingly, he has struck out 15 men over 20 2/3 innings in his last three starts, a solid 6.5 K/9, particularly given that he had a groundball-to-flyball ratio over those three starts of close to 2:1. That's the pitcher Nova was in the minors, and what the Yankees hope he can give them the major league level: league-average strikeout rate, lots of groundballs. If so, he can be a solid mid-rotation innings eater, but if he's unable to hold onto those recent gains in strikeouts or groundballs . . . duck.

Juan Nicasio is a 24-year-old Dominican righty who put up some strong strikeout-to-walk ratios in the minors (4.49 K/BB career) and made the jump from Double-A to the Rockies rotation to replace De La Rosa in late May. So far, so good: three quality starts in five turns and a 3.43 K/BB. His last start was his lone disaster, but he still struck out six men against two walks in 4 2/3 innings. He isn't a serious prospect as he is a bit over-reliant on his four-seam fastball. He gets the pitch into the mid 90s on the gun, but he throws it two-thirds of the time (per TexasLeaguers.com). He does miss bats his mid-80s changeup, which seems to be evolving into a key pitch for him, and works in an even slower slider, but the slider is nothing special, nor is his cutter, and his curve is mostly a rumor (Texas Leaguers says he has thrown four out of 467 pitches since being called up. If Nicasio turns into an asset for the Rockies, it will be a nice surprise, but as a starter, he's not expected to be more than a four or five in a major league rotation.