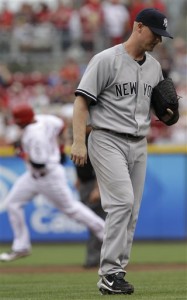 Brian Gordon couldn't match his miraculous Yankee debut. Facing the Reds in the nightcap of Wednesday's doubleheader, the 32-year-old converted outfielder surrendered three home runs and four runs in five innings. "I made three mistakes and paid for all three of them," he said afterwards. Chris Heisey, a part-time outfielder who began the night in center field, poked two of those mistakes for homers, and added a third later at Hector Noesi's expense. The latter was absolutely brutal, and what had been a close game turned into a 10-2 rout, leaving the Yankees with a split for their day's work. Still, taking two out of three from the NL's highest-scoring team in their home park while using Ivan Nova, Freddy Garcia, and Gordon to start qualifies as a successful series, and taking four out of six on a swing through NL parks, sans DH, counts as a successful road trip.

Gordon did have his moments, getting first-pitch strikes to 16 out of 20 hitters, and at one point retiring 10 straight Reds. He didn't walk anybody despite a rather tight and seemingly inconsistent strike zone, and aside from the homers, gave up just two singles, dropping his cumulative BABIP from .389 to .273. He kept the Yankees in the game, though aside from Nick Swisher's second-inning homer, they collected just one other hit in seven innings against Johnny Cueto — the lone run the Reds' righty had allowed in his past three turns. Gordon even drew a walk in his long-awaited first major league plate appearance, a dream he had yet to fulfill even amid last week's fanfare; the walk led off the third inning and turned the batting order over, yet the Yankees couldn't capitalize.

Still, Gordon wasn't nearly so efficient as he was last Thursday, needing 43 pitches to complete that 10-batter stretch, and he gave up 13 flyballs as opposed to six grounders, as difficult a blend to survive upon in Great American Ballpark as it is in Yankee Stadium. Asked afterwards if Gordon would remain in the rotation, manager Joe Girardi answered affirmatively:

"He had one good start and one so-so start," Girardi said. "Obviously he’s gotten an opportunity because we have people that are hurt. Besides the few mistakes he made, he did okay, but his mistakes were big mistakes… He’s in our rotation. I haven’t sat and thought with the extra days off, what do you do? Right now, I have plans for him to start again."

Girardi's less-than-ringing endorsement — and his hint that Gordon might be skipped once — comes amid a mixed but mostly positive stack of news regarding the rotation's other options, news which serves to remind that this is a temporary reprieve at best:

• Phil Hughes received positive reviews for Sunday's rehab start, in which he threw 4.1 innings and 61 pitches for the Staten Island Yankees. He survived a 25-pitch first inning to whiff seven without walking anyone, maintaining a 92-93 MPH fastball and topping out at 95, a major improvement upon his early-season readings. The tentative plan is for him to make two more rehab starts, with his next one coming for Double-A Trenton on Friday and the following one likely to happen with Triple-A Scranton. If all continues to go well, that could bring him back to the Bronx before the All-Star break.

• Bartolo Colon began his throwing program by playing long toss on Tuesday, leaving open the possibility — but hardly guaranteeing — that he too could return before the All-Star break.

• David Phelps was placed on Scranton's disabled list due to a shoulder injury after being rocked for six runs in five innings during his June 21 start. He's scheduled to undergo an MRI, which will reveal whether there's any structural damage or if this is just a bout of inflammation. Either way, he's off the table as an option for the foreseeable future.

• Noesi... ugh. If Gordon was less than stellar on Wednesday night, Noesi was downright awful. He pitched the Yankees right out of the game, surrendering six runs on eight hits while recording just five outs. Girardi could have pulled him after he yielded three runs on five hits (plus a bases-loaded hit-by-pitch) during an endless seventh, but instead sent him out for the eighth rather than risk worse from the just-recalled Buddy Carlyle. Noesi got two outs and allowed one baserunner before yielding an RBI pinch-single to Scott Rolen and then Heisey's two-run homer. Blergh. "He just made mistakes," said Girardi.

It was the first time Noesi has truly struggled since being recalled; the outing knocked his ERA from 1.50 to 4.12. Call it a correction; his BABIP rose from an unsustainable .204 to .277. More disconcertingly, he has just seven strikeouts to go with seven walks in his 19.2 innings (3.2 per nine), and just three apiece in the 15.2 innings since his debut in Baltimore. Wednesday night's outing was merely a low-leverage failure, but Noesi's ongoing inability to miss bats won't convince any of the Yankees' decision-makers that his being passed over for starts is an injustice, nor does it help his case to remain on the big league staff.

As for Gordon, Wednesday's egg no more proves that adding him to the rotation was a mistake than last week's outing proves that it was a stroke of genius. As a replacement fifth starter, his job is to keep the Yanks in ballgames and he's done that; it's not his fault the AL's second-highest scoring team has scored just two runs while he's been in the game, and five runs total across his two starts. Like Noesi, he's a fringe guy who needs to hit his spots and receive help from his defense to succeed, and he didn't entirely hold up his end of the deal this time around. You can argue until you're blue in the face that his two turns should have gone to one of the organization's own products, and that not doing so somehow sends a message to those prospects that life is nothing but a nasty, brutish and short toil preceding death.

I remain unconvinced by those arguments. As Cliff points out, it's too much to say that Brian Cashman is afraid to take chances on the organization's products given the histories of Chien-Ming Wang, Hughes, Joba Chamberlain, Ian Kennedy, and Ivan Nova; I'd also include David Robertson in that group. That Cashman and company have a lack of conviction in the current abilities of Scrantonistas Phelps, D.J. Mitchell and Adam Warren is merely an opinion that's in line with a consensus of scouting experts, and in the end, Gordon's an additional bit of organizational depth at a time when the Yankees are lacking in it, dealing with a spate of injuries at the Triple-A level as well as the big league one. His addition to the ranks says nothing about the future handling of Dellin Betances or Manny Banuelos, the higher-end arms who represent the real future of the Yankees' rotation. Soon enough, he'll be shuffled to the bullpen or the minors, and all that will really matter is that he's a better pitcher than the utterly useless Amauri Freakin' Sanit, whom he replaced on the 40-man roster. In the meantime, he's got a small window of opportunity to help the big league club, and hopefully he can provide more help in his next turn — whenever that is — than he did on Wednesday night.