Flogging a Dead Horse is Better than Leading Off With One

Share All sharing options for: Flogging a Dead Horse is Better than Leading Off With One 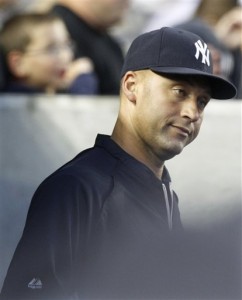 There's little to smile about when it comes to the topic of Derek Jeter leading off. (AP)

During Sunday night's game against the Cubs, ESPN analyst and former big league manager Bobby Valentine said what somebody in the Yankee organization sorely needs to say: that when Derek Jeter returns from the disabled list, the Yankees should bat him ninth, keeping Brett Gardner in the leadoff spot. Alas, in today's New York Post, George King reports that the Yankees are having none of that nonsense Joe Girardi intends to restore the Captain to the top spot once he returns: "He has been our leadoff guy. We will see how he feels but, yeah."

The Yankee skipper's response doesn't exactly brim with confidence or imagination, and why should it? Jeter's hitting a meager .260/.324/.324, but the Yankees have decided to keep him in the spotlight as he closes in on 3,000 hits. In the wake of the winter's contentious contract negotiations, neither Girardi nor Brian Cashman have mustered the courage to do what's best for the lineup by limiting his exposure, the way they did — albeit in an unnecessarily heavy-handed manner — with Jorge Posada. You can credit the Yankees with consistency on the topic; back in mid-February, Girardi proclaimed that the Yankees "signed him to be our leadoff hitter," and while he toyed with the option of using Gardner there during spring training, the machinations had the feel of a fixed fight.

As King points out, the Yankees are 6-1 since Jeter went down, and the combination of Gardner and Swisher — the two hottest Yankees in June — has hit an ungodly .423/.559/.654. Obviously, that's unsustainable, but with OBPs of .371 and .367, respectively, either would be an incremental improvement atop the lineup. On a theoretical level, it doesn't add up to a whole lot; we've been over the preseason calculations that show gains on the order of five runs a year, about half a win in the standings at best. Using 2011 stats, the difference is about twice that; a Gardner 1/Jeter 9 lineup comes in at 5.492 runs per game, a Jeter 1/Gardner 9 lineup at 5.424 — a difference of 11 runs over the course of a season, more than a win in the standings. You don't need me to tell you that could be the difference between playing on in October and going home.

With the Yankees still second in the league in scoring at 5.31 runs per game, it's not as though Jeter has been a total hindrance to scoring, but it's just as clear that at his current level of ability — .267/.336/.357 since the beginning of 2010 — he's a shoddy choice for a leadoff hitter. The average major league leadoff man is batting .264/.328/.387. Jeter's stats in the top spot (.270/.336/.345, a good match for his 2010-2011 stats) straddle those, and his sOPS+ — his park-adjusted split relative to other leadoff hitters — comes out to 92, meaning he's about eight percent less productive. Among the 15 hitters who have enough plate appearances in the leadoff spot to qualify for the batting title, Jeter ranks ninth in batting average and on-base percentage, and a more dismal 13th in slugging percentage, ahead of only Ichiro Suzuki (off to a horrible start this year) and Juan Pierre (a total waste of space on a roster, let alone in a leadoff spot). Overall, he's 10th in sOPS+ among leadoff hitters, better than Pierre but worse than Ryan Theriot:

At this point it's quite apparent that the swing work Jeter did with hitting coach Kevin Long in the offseason and the spring has not arrested his decline in any tangible way. In fact, he's abandoned it to some degree, so other than hoping for a random BABIP spike or actually exercising some leadership, the Yankees don't have much choice but to grin and bear it.

Of course, this is no longer simply about swing mechanics or baseball logic, it's about ego and deference. The epitome of seemingly effortless excellence and radiant confidence in his prime, Jeter has been unwilling to admit or recognize that he's not the same player as he was a few years ago, hence the hurt feelings that the winter's negotiations engendered. With the pending celebration in mind, the Yankees could only take that tack so far, and in the end they've capitulated to such an extent — both with the four-year contract and the continued commitment to his leading off — that they might as well have not brought the subject up.

We've been over this topic time and time again here at the Pinstriped Bible. Jeter is a surefire first-ballot Hall of Famer, and he deservedly occupies a special spot in the hearts of Yankee fans. Nonetheless, the ol' gray mare she ain't what she used to be, and while the gains to be had by not leading off Jeter are small, they are there for the taking. They're potentially more trouble than they're worth, but only insomuch as the day that the Yankees have to break the sad news to Jeter can be forestalled indefinitely. It can't; it will come, and when it does it will make Posada's Big Sitdown look like a seven-year-old's birthday party, even if the Captain does put on a brave public face. In the absence of even a hint of willingness to change on the Yankees' part, this discussion amounts to flogging a dead horse, but at least that beats leading off with one.