Share All sharing options for: Stinging Gordon Some More 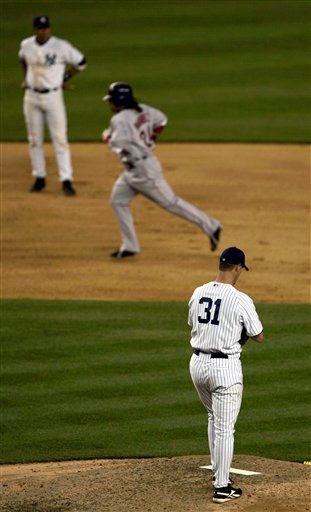 The transient rewards of finding another Aaron Small are not worth the time and opportunity costs. (AP)

Brian Cashman did himself no favors last week when comparing Brian Gordon to past free-talent pickups Dustin Moseley, Aaron Small, and Darrell Rasner. Over at Baseball Prospectus, Jay called that "one-for-three . . . at best" on the "Yankees fan warm, fuzzy meter." I assume he was referring to Small's fluke 10-0 season in 2005 as the "one," but in terms of my reaction to the acquisitions of those three players, my "one" was Rasner, and I wanted to take a moment before Gordon's second start tonight to explain why I praised the addition of Rasner in 2006 but took a negative view of the addition of Gordon last week, as well as to return Jay's volley given that he took a kinder view of the Gordon acquisition.

To begin with, I just want to point out that I'm not blind to Gordon's story. Fifteen years in the minors, converted to pitching at 28 years old, passed through five organizations without ever being traded for, plucked from relative obscurity to start at Yankee Stadium, forced to get his throwing in at a public park across the street the day before his start because he wasn't officially Yankee property yet. I get it, but contrary to the sportswriter credo, I don't root for stories. I root for astute baseball decisions, and I don't think the Gordon signing was one.

My main complaint about the Gordon signing is that he was given an opportunity that should have gone to a proper prospect. That wasn't an issue when the Yankees signed Rasner. Just look at who pitched for the Yankees Triple-A team (then the Columbus Clippers) in 2006. The Clippers' leaders in games started that year were, in order, Kris Wilson, Jorge De Paula, Tommy Phelps, Steven White, Jeff Karstens, Rasner, a 34-year-old post-Red Sox Ramiro Mendoza, Matt DeSalvo, and Small in his back-into-a-pumpkin season.

Rasner was in his age-25 season that year. The only pitchers to make more than one appearance for Columbus that season at a younger playing age (meaning their age as of June 30) were Karstens, who was 23, and Brian Bruney, 24, the latter of whom was signed as a minor league free agent that July in another move I praised at the time. Rasner wasn't cutting in line ahead of any in-house Yankee prospects, he was a desperate attempt to acquire an upper-level pitching prospect, and for what it was, it worked. Rasner went 4-0 with a 2.76 ERA in ten starts for Columbus in 2006 and made a couple of quality starts for the major league club in September after returning from a mysterious shoulder injury. Rasner's Triple-A ERA that year was the lowest of the ten pitchers mentioned above, and only relievers Colter Bean, then 29, and Jose Veras, also 25, threw more innings for Columbus that year with a lower ERA.

Time travel this year's Gordon into the Yankee organization in 2006, and it wouldn't matter that he was going to turn 33 in August, because there was no one on the Triple-A roster any more deserving of the opportunity (one might be tempted to argue for Karstens given his current 2.54 ERA with the Pirates, but his 83 ERA+ over the previous five seasons speaks far louder than his slightly hit-lucky performance in 78 innings thus far this year).

In 2011, however, Gordon's age matters a great deal. In expanding upon the above-linked BP piece here at the Bible last week, Jay wrote:

Hector Noesi and his fellow Scrantonites [David Phelps, Adam Warren, and D.J. Mitchell] aren’t in the class of Hughes and Chamberlain as prospects; indeed, opinions are mixed among prospect experts at Baseball America, Baseball Prospectus, ESPN and elsewhere as to whether they’re even better prospects than Ivan Nova, who’s currently doing more surviving than thriving in the five spot.

Granted, but does Gordon profile as any better than that lot? I'd argue he doesn't, and with all else being roughly equal, is there any good reason to give that opportunity to a 32-year-old journeyman rather than a 24-year-old second-tier prospect who would spend his six team controlled years in the prime of his athletic life if he happened to run with the chance?

That's really the crux of the argument. How much higher are the Yankees' expectations for Gordon than for Hector Noesi, who had already pitched well in the major leagues this season when Gordon, who had only thrown four relief innings in the majors three years ago, was signed to block his path? It's not that I think Noesi is going to be the next Michael Piñeda, but unless Gordon is the next Jamie Moyer, what value is there to giving him an opportunity those in-house pitchers seem to have earned?

That brings us back to Aaron Small. I suppose Cashman was patting himself on the back for Small's 10-0 season in 2005, but as Steve wrote at the time (with typical eloquence and clarity, though for the moment lost in the tangle of this site's many domain changes) Small's season wasn't just a pitcher finding his upside, it was a once-in-a-generation fluke, the likes of which couldn't be predicted or anticipated in any way, and similarly can't be reproduced.

Here's what I wrote about Small when evaluating the Yankees' spring training invitees that March:

A 33-year-old journeyman, Small has been bouncing between AAA and the majors since 1994 with nine organizations, a few of them twice. Other than a solid AAA showing in 2001, he hasn’t pitched particularly well at either level since impressing at AAA as a 23 year old a decade ago.

Prior to joining the Yankees, Small had thrown 218 major league innings for five different teams (and the Marlins twice) and had a career ERA+ of 82, meaning that, after adjusting for the ballparks he pitched in, he was roughly 18 percent worse than the average major league pitcher over that span. In 2005, he went 10-0 with a 3.20 ERA, good for a 133 ERA+. In 2006, he went back to being Aaron Small, with 27 2/3 innings of a 54 ERA+ for the Yankees, and a 5.62 ERA for the Clippers. In 2007, he failed to make the Mariners out of camp and retired that May.

That's why I say Cashman did himself no favors by invoking Small, Moseley, and Rasner last week. Small's 2006 performance was poor enough that his final line as a Yankee was a 94 ERA+ in 103 2/3 innings. Rasner, though he had stretches during which he seemed like a viable back-end starter, posted an 89 ERA+ in 158 1/3 innings across three seasons with the Yankees. Moseley is a real head-scratcher as he, mercifully, spent just one season with the Yankees during which he posted an 86 ERA+ in 65 1/3 innings. Cashman compared Gordon's ability to retire major league hitters to that trio. That's not encouraging.

By comparison, Gordon has only been pitching professionally for a little more than four years, had almost no prior major league exposure, and pitched well in the four innings of work he did get in the majors. Cashman could have sold Gordon to us as a player who, despite his age, is still on the incline of his learning curve as a pitcher and has yet to be properly tested at the major league level. That he didn't seems additionally damning to me. Rather, he said, "I'm not afraid to take a chance."

It's too much to imply that Cashman is afraid to take a chance on his own prospects. After all, this is the GM who forced Chien-Ming Wang on Joe Torre by decree, who opened the 2008 season with Phil Hughes and Ian Kennedy in the rotation and implemented Joba Chamberlain's return to starting later that season, who has stuck by Hughes (though not Chamberlain) since, and opened this season with Ivan Nova in the fifth spot, stuck with him despite his struggles, and is beginning to be rewarded for that. Still, all that only makes the Gordon signing all the more perplexing. I can only interpret it as a Hail Mary, an attempt to play the hero that has about as much chance of success as that desperation deep pass. Sure, I'm happy for Brian Gordon as an individual, but the Yankees have never been about making individuals happy. Why start now?