Improving in the Nick of Time

Share All sharing options for: Improving in the Nick of Time 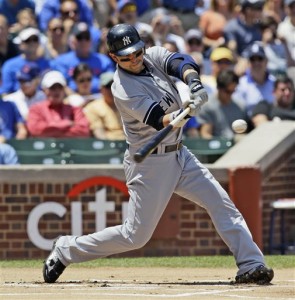 Nick Swisher hasn't had much trouble against lefties this year... (AP)

With their victory over the Reds on Monday night, the Yankees have now won nine of their last 11 games, making this their hottest such streak of the season. Even including the miserable three-game sweep by the Red Sox that preceded this run, the Yankees are 12-6 in June, and have been outscoring opponents by 1.7 runs per game this month, a wider margin than in either March/April (1.4) or May (1.1). While Alex Rodriguez, Robinson Cano and Jorge Posada have been swinging the bat particularly well, the team's two hottest hitters have been their corner outfielders. Brett Gardner is batting .415/.483/.623 in 60 June plate appearances, yet mysteriously disappearing from the lineup in favor of Andruw Jones against lefties — a situation Steve addressed on Monday — while Nick Swisher is hitting .310/.455/.603 in 77 plate appearances, suddenly looking like the dangerous weapon of the previous two seasons.

And not a moment too soon. The 30-year-old switch-hitter was batting .204/.321/.289 with just two homers as of May 25, and was up to just .213/.335/.314 at the end of the month; on some days, Joe Girardi even hid him in the number eight spot, or gave Chris Dickerson a turn. Now it seems as though Swisher's getting on base in key spots on a daily basis. He reached base six times during those back-to-back 12-run outbursts against the Rangers last week, with all three of his hits going for extra bases. On Sunday against the Cubs, he drove in four runs to help the Yankees turn a 4-1 deficit into a 10-4 rout, with an RBI single and a late three-run homer. On Monday, his leadoff single in the top of the first keyed a four-run inning, and the Yankees never looked back.

Nonetheless, Swisher's overall line of .238/.367/.388 isn't much to write home about. When broken down by handedness, his splits are miles apart :

Swisher has traditionally shown more power against righties, but more patience against lefties. This year, he's been an outright mess against righties, taking his walks but getting very little love on balls in play, and struggling to hit for power, Sunday's homer off Chris Carpenter (this guy, not this guy) notwithstanding. Where Swisher has homered against righties in 5.3 percent of his career plate appearances, he's down to 2.1 percent this year. On the other hand (literally), the hits have been falling in for him against lefties, and they've been leaving the yard as well; his 3.2 percent home run rate from that side matches his career mark.

Looking over Swisher's batted ball splits at Fangraphs, what sticks out is that he's hitting a ridiculous number of groundballs to the right side as a lefty (i.e., against righties); his groundball-to-flyball ratio in that split is 4.38, more than double his career mark of 2.18; he's never been higher than 2.63 before. Granted, we're only talking about a small sample of 52 balls in play, but he's hitting just .269 and slugging .513 to that side as a lefty, which sounds adequate until you consider that hitters tend to do the most damage when they're pulling the ball, and Swisher's career mark in that split is .387 with a .785 slugging percentage (similarly, it's .391 with a .760 slugging percentage when pulling from the other side of the plate). Swisher has just one double in those 52 PA, compared to 12 in 123 PA last year. If you look at his spray chart, it appears that a bunch of ants are having a feeding frenzy around first base: 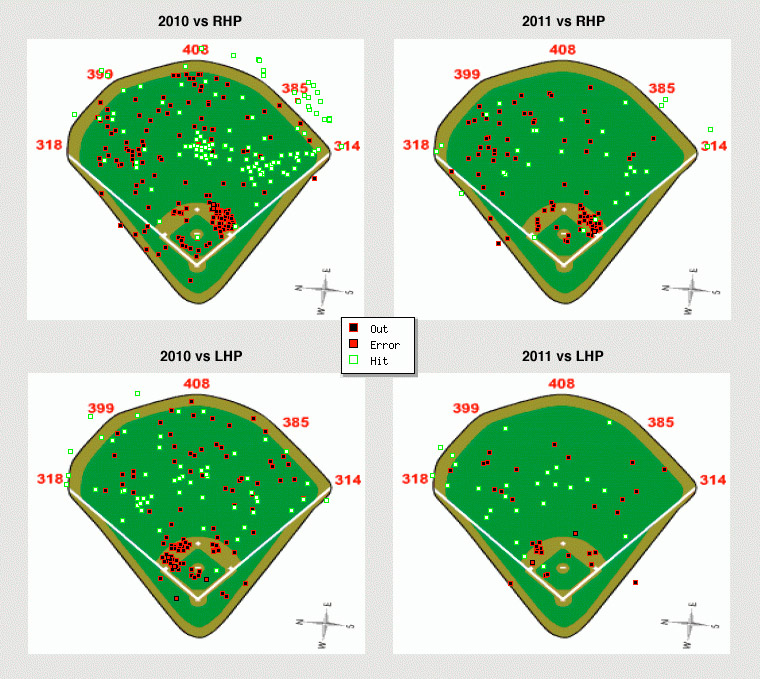 ...but he's become the groundout king while batting against righties. (spray charts from pitchfx.texasleaguers.com).

Unlike, say, Curtis Granderson, Swisher isn't a player who tends to offer a whole lot of insight into his hitting, or discussion of his mechanics. After Sunday's game, he said, "I know I dug myself a hole there early in the season, but I’ve been battling, fighting and putting the time in, just having fun." Earlier this month, when he first began heating up, he said, "I’m so much better when I don’t try. I think sometimes when you do try too much, things go south. For myself, I’ve just been working on that mental side of the game and just really trying to fight and scratch and claw my way out of there." Battling, fighting, scratching, clawing — those aren't exactly terms one can dissect at great length.

One interesting byproduct of Swisher's struggles has been the restoration of his patience at the plate; he's fourth in the league in walks, with 47, and is already approaching last year's total of 58 — well down from the 97 he drew in 2009, when he ranked second in the league. His unintentional walk rate of 16.3 percent is second in the majors behind only Jose Bautista, who's often being deliberately pitched around even when he's not being walked intentionally.

Thus Swisher's retained some value even as things haven't gone his way. He's still maintaining some vestiges of last year's more aggressive approach, swinging at the first pitch 24 percent of the time (down from 25 percent in 2010, but well above his career mark of 20 percent), but he's still very selective, swinging at just 39 percent of all pitches, right at his career mark, compared to a high of 44 percent last year.

When Swisher was struggling it was suggested that his his lack of production and low comparatively low salary might make him a target for an upgrade, with Carlos Beltran's name mentioned more than once, not that he's the only option out there by any means. A healthy Beltran would be an upgrade even if Swisher rebounds to his 2009-2010 level, but the question is one of necessity; the Yankees are likely to have several areas in need of fortification once the trade deadline approaches, and only so many prospects they're willing to part with. Here's hoping Swisher can continue to hit his way back into the team's picture so that an upgrade becomes unnecessary.