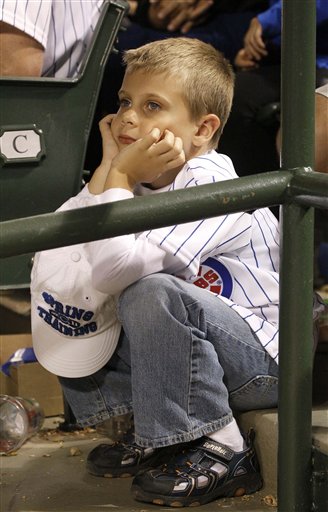 Cubs baseball. Get used to it, kid. (AP)

The Cubs are the worst team in baseball at turning balls in play into outs and, partially as a result, they have allowed more runs per game than any other team in baseball thus far this season. Never mind Alfonso Soriano's contract, the Billy Goat curse, or even the middling performance of their offense, the Cubs can't keep their opponents from scoring, and that's why they have the second-worst record in all of baseball entering this weekend's series against the Yankees.

Advance defensive systems disagree on exactly how to spread the blame around, but both Ultimate Zone Rating and Baseball Prospectus's Fielding Runs have low opinions of the work that has been done by Aramis Ramirez at third, Carlos Peña at first, and especially sophomore Starlin Castro at shortstop.

Injuries to the starting rotation haven't helped. Randy Wells and Andrew Cashner both made just one start in April before hitting the disabled list with arm problems. Wells is back, but Cashner, the team's first-round drat pick in 2008, has suffered a set-back and isn't expected back until July, and then as a reliever. The Cubs were also without Matt Garza for a spell and have produced no better replacement for Cashner than veteran retread Doug Davis.

Wildness has also plagued the pitching staff. The Cubs lead the majors in walks (though if you remove intentional passes they are "only" second behind the Blue Jays), and are fourth in hit batsmen, putting 272 hitters on base free of charge between those two categories (again, not counting intentional passes). That's nearly a third of all of the batters who have reached base against the Cubs this season. That translates to a .347 opponents' on-base percentage, compared to a major league average of .321. Yet, despite all of those runners on base, the Cubs have induced the fewest double plays in the majors, turning the deuce in just seven percent of their opportunities, also a major league worst (league average is 11 percent), which brings things back to that weak infield defense.

Out-hitting that combination of pitching and defense is a tall task, and the Cubs are not up to it. Their best hitter is probably Fukudome, a right-fielder who is slugging .419. Alfonso Soriano, who is now 35, is still hitting home runs, but hasn't even attempted to steal a base this year and has just five unintentional walks and an even .300 on-base percentage. Peña's .221 batting average undermines his patience and power. Geovany Soto is hitting .220 with less of both. Aramis Ramirez has been middling in every way. Castro's production has been mostly singles. Before he got hurt, Barney's was almost entirely singles. There's just nothing there.

The Cubs are hanging around the National League average in runs scored per game, but there's not a hitter in their lineup opposing teams are concerned about facing, and really no reason for any team to be concerned about facing the Cubs in general. Though they just took three of four from the Brewers, the Cubs lost 13 of 16 prior to that series, including dropping two of three to the Pirates (who actually have a better record than the Rockies right now) and a three-game sweep at the hands of the Astros, the only team in baseball with a worse record than the Cubs.

Davis was among the veteran retreads I profiled when the Yankees were digging in the trash heap this winter. Here's what I wrote back in January:

Veteran lefty Davis was a solid league-average innings eater for most of the last decade (108 ERA+ from 2001 to 2009 and an average of 196 innings per season from 2004 to 2009), but he has faced serious health problems in recent years. Thyroid cancer interrupted his 2008 season, and pericarditis (inflammation in the membrane around his heart) and elbow tendonitis limited him to eight starts in 2010. In early October he had an ulnar nerve transposition and surgery to repair the flexor tendon in his pitching elbow. Davis walks too many men even when healthy (4.1 BB/9 career, producing a weak 1.64 K/BB), but his value has been his reliability. At the age of 35, coming off that litany of health issues, that value has been completely undermined.

Davis ultimately signed a minor league deal with the Cubs in mid-April, made two minor league starts (a good one in High-A and an abbreviated one in Triple-A), then got called up in mid-May to take the rotation spot that had been filled by lefty reliever James Russell since the duel injuries to Cashner and Wells. He has made just one quality start in six attempts since then while the Cubs, who have scored 2.29 runs per 27 outs when he was on the mound, have gone 0-6 in his starts. Davis has had only one disaster start, his second, but has only reached the sixth inning once thanks to a high walk rate (5.6 BB/9) and bad luck on balls in play (.380 BABIP).

Per that last, Davis, who has also struck out 8.4 men per nine innings, hasn't pitched as poorly as the numbers in the header above would indicate, but it's still clear that the Yankees chose correctly by bypassing Davis in favor of Garcia. Davis averages less than 85 miles per hour on his fastball and thus more frequently deploys his 81 mile per hour cutter, mixing in a changeup that averages less than 70 miles per hour, and curve that sits below 80. Veteran lefty junkballer, they name is Doug Davis.

Freddy Garcia recovered nicely from his disaster against the Red Sox with a nice quality outing against the Indians, his fourth quality start in his last four turns.

A shift to the rotation in 2008 salvaged the then-31-year-old Dempster's career and earned him a nice four-year deal worth $52 million (the final year is a player option for 2012). He was solid in the first two years of that deal, posting an ERA below 4.00 in more than 200 innings each year, and this season seems to have recovered from a miserable April in which he posted a 9.58 ERA by allowing four or more runs in each of his six starts. Since the calendar flipped to May, Dempster has gone 4-2 with a 3.21 ERA with seven quality starts in nine turns. Of the 20 runs he has allowed over that stretch, 11 came in his two non-quality outings, and both of those came on the road. Dempster throws a two- and four-seam fastball around 90 miles per hour and misses bats with a mid-80s slider, mixing in the occasional change or splitter.

Until A.J. Burnett throws consecutive quality starts this season, I'm going to tell you that he hasn't done so, which he hasn't. His last start was a strong 7 2/3 innings against the Indians (5 H, 1 R, 1 BB, 8 K), so he can shut me up with a quality start on Saturday, but for now I've already got his comment for my Rockies series preview written in my head.

A 38th-round pick in 2002 as a catcher, Wells moved to the mound full time in 2004 and established himself in the Cubs' rotation in 2009. He pitched well in '09, took some baby steps backward in 2010, then hit the DL with a forearm strain after his first start of 2011. His first three starts after returning in late May were shaky, but he turned in a quality start against the Brewers in his last turn, though he also walked more men than he struck out in that game. Wells' soft (read: sub-90 mph) sinker/slider mix belies his 6-foot-5 frame, which likely works to his advantage. His best pitch is an 80-mile-per-hour changeup, which helps explain his reverse split. That he doesn't have much success against righties, however, doesn't bode well for his major league future.

Sabathia has allowed four or more runs in five of his last nine starts. However, he also averaged more than 7 1/3 innings per game over that stretch and has received 6.84 runs per 27 outs of support while on the mound this season, which has helped to hide those extra runs allowed in his ERA and record, respectively. So, Sabathia has yet to really activate his ace powers this season, but he's still giving the Yankees innings and the team is still winning his starts (5-1 in his last six). If he doesn't flip the switch in the second half, then you can worry.