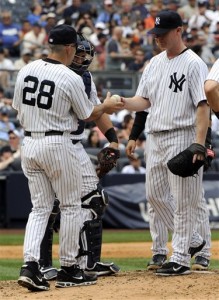 Brian Gordon gave the Yankees an impressive effort under the circumstances. (AP)

Derek Jeter's injury scrambled my plans to chase down his 3,000th hit from the Yankee Stadium press box, but the controversy surrounding the team's choice of starting pitcher on Thursday made a trip to the ballpark a worthy venture. As a writer, you root for stories, and Brian Gordon gave everyone who came to see his start a fantastic one. Watching him rise to the occasion of his first major league start and get a chance to savor the moment was a pure pleasure. Despite the 12-inning game, the humble Gordon stood at his locker for well over 20 minutes and retold the story of his unlikely journey and the details of his afternoon while the media (myself included) ate it up. My own effort is up at Baseball Prospectus:

On Tuesday, Brian Gordon was a curiosity, a 32-year-old converted outfielder who had put up sterling numbers for the Phillies' Triple-A affiliate. One June 15 opt-out date, one well-timed rotation vacancy, and 5.1 innings of dogged labor later, he was the recipient of a well-earned standing ovation from a crowd of 47,487, and the newest member of the Yankees rotation. In the first major-league start of his career, the serendipitous starter held his own against a Rangers lineup that ranked fourth in the league in scoring, and while he left with the Yankees trailing 2-1, they ultimately won in 12 innings on a walk-off single by Brett Gardner, completing a sweep of the AL West leaders.

...Watching Gordon's start on Thursday afternoon, it was easy to see what the Yankee brass found so compelling. Gordon pounded the strike zone using primarily an 88-91 mph fastball and a big-breaking 68-70 mph curveball, mixing in the occasional cutter, slider, and changeup. Though his line — seven hits, three walks (one intentional) and one hit batsman to go with three strikeouts — was hardly spotless, he worked quickly and stayed ahead of hitters. Through four innings, Gordon had surrendered four hits and no walks without allowing a run, throwing strikes on 37 of 49 pitches. He didn't go to a three-ball count against any Ranger until the top of the fifth inning; overall, he threw first-pitch strikes to 19 of the 26 hitters he faced.

...Over at Pinstriped Bible, our own Steven Goldman got rather exercised about the message the Yankees seem to be sending by deciding to bypass the organization's own products: "The only possible message is that they will never be good enough, that the Yankees are so deeply suspicious of their own prospects that they would rather take someone else’s trash over their own treasure." Had he been at the presser, poor Steve would have rolled his eyes as Girardi sidestepped a question along similar lines from the New York Post's Kevin Kernan, who asked Girardi, "What does it say about this guy coming up and throwing strikes and the importance of throwing strikes? We always hear about young guys with live arms and no command, and command guys don't seem to be getting the chance that they deserve." In a rather obfuscatory answer, Girardi cited Gordon's veteran experience and the determination he showed in his willingness to undertake a career change.

The glass-half-full take on Gordon's addition is that at no cost, [Brian] Cashman alertly added another arm to the organizational larder* at a time when the Yankees have two starters and two key relievers on the disabled list, with zero guarantee that [Bartolo] Colon, Phil Hughes, and Rafael Soriano will be effective and bulletproof the rest of the way. The same goes for Freddy Garcia, who has pitched his way back from the outskirts of oblivion, but who still owns just one season of more than 65 innings since 2006. None of the aforementioned Scrantonites is considered to be more than a second-tier prospect with back-of-the-rotation stuff, and while there's something to be said for taking a peek at what they can offer, their time may still come, and the price for adding Gordon was right. For one afternoon, Gordon gave the Yankees far more than their money's worth, and capped an epic journey with an unforgettable performance.

At the very least, I don't think anyone can accuse the Bible Study Group of groupthink on this one. Talking with Steve and a few of my Yankee-minded BP colleagues at lunch the other day on the occasion of Stephani Bee's visit to our fair city, I could certainly see his side of the issue, but on the subject of mining trash for treasure, Cashman and company have earned some benefit of the doubt — and bought themselves some time — given the initial success of Colon and Garcia. Now, it doesn't help that the B-side of those particular hits features Hughes and Chamberlain on the disabled list, mismanaged in more ways than one over the years; I don't think there's any Yankees partisan around who doesn't feel some amount of frustration over their travails.

Hector Noesi and his fellow Scrantonites aren't in the class of Hughes and Chamberlain as prospects; indeed, opinions are mixed among prospect experts at Baseball America, Baseball Prospectus, ESPN and elsewhere as to whether they're even better prospects than Ivan Nova, who's currently doing more surviving than thriving in the five spot. The Yankees appear to be playing the should-he-start-or-should-he-relieve game with Noesi, but it's worth noting that Thursday's outing in relief of Gordon was his first high-leverage appearance aside from his extra-inning emergency effort in his debut; in other words, he's working his way up in the team's plans rather than simply being thrown into the fire. The Gordon move to the contrary, it hasn't escaped anyone's notice that he has been getting big league hitters out. The ongoing fragility of the rotation suggests he and his peers will get their turns sooner or later, but for now, finding somebody better than Amauri Sanit or Buddy Carlyle to throw key innings an important improvement.

One other note: the asterisk in that excerpt above refers to an aside I made about another one of Cashman's opt-out-based free talent pickups, Cory Wade: "...who opted out of his minor-league deal with the Rays after putting up strong numbers at Triple-A Durham. Within 24 hours of being signed, Wade pitched three 1-2-3 innings — two more than Soriano thus far, which is why you don't spend $35 million on a reliever — and picked up Thursday's victory to boot."

After the game, Girardi said words to the effect that Russell Martin's experience in working with Wade in L.A. played a role in the decision to go after Josh Hamilton instead of pitching around him with two outs in the 12th; he struck the slugger out. I watched the late-blooming Wade emerge as a key component of Joe Torre's bullpen with the Dodgers in 2008; like many a middle reliever under Torre, his manager's confidence was a mixed blessing, a ticket to overuse. Wade lost most of the 2009 and 2010 seasons to shoulder woes after being worked hard as a rookie, but his performance at Durham (1.23 ERA and 34/6 K/BB ratio in 36.2 innings) made him worth taking a chance upon. As somebody with a more recent track record of success than Luis Ayala, he's a legitimate candidate to throw important innings if he can stay healthy.