The Grass Is Always Greener: The Brian Gordon Conundrum

Share All sharing options for: The Grass Is Always Greener: The Brian Gordon Conundrum 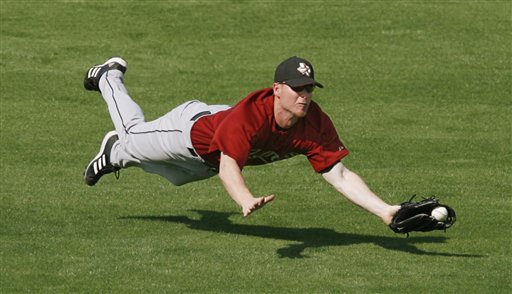 Brian Gordon, seen here making a diving catch as an outfielder in a spring training game against the Yankees in 2006, will start for the Yankees today rather than a deserving in-house candidate such as Hector Noesi. (AP)

I don't know about you, but I was completely blindsided when, during Tuesday night's YES broadcast, it was announced that the Yankees were considering giving Thursday's start to a 32-year-old Phillies farmhand named Brian Gordon. Giving that opportunity to Hector Noesi seemed like such a no-brainer that I went ahead and listed Noesi as Thursday's starter in my preview of this week's Rangers series. After all, Noesi is not only a home-grown prospect eight years Gordon's junior, but he has posted a 1.76 ERA over 15 1/3 major league long relief innings over the past month, most recently impressing with a six-inning relief outing against the Red Sox last Tuesday. Gordon has thrown just four major league innings, those coming back in 2008 (coincidentally for the Rangers), and while his overall performance in that almost irrelevant sample was solid, he has never thrown consecutive scoreless innings in the majors.

Noesi was sent back to Triple-A after his six-inning outing in exchange for a fresh arm only to be recalled on Sunday after Bartolo Colon hurt his hamstring, thus vacating today's start, but has not been used in relief since his return (though he did warm up in the fifth inning Wednesday night without entering the game). Nonetheless, it will be Gordon, not Noesi, not even David Phelps (another in-house Triple-A starter whose name was floated by the organization), who will start today's afternoon finale.

For those unfamiliar with Gordon, which is likely almost everyone, he was drafted by the Diamondbacks out of a Texas high school in the seventh round of the 1997 draft as an outfielder. He hit .274/.321/.459 in his first ten minor league seasons with the Diamondbacks, Angels, and Astros organizations, but with a 3.75 K/BB ratio and, despite four full seasons in Triple-A, no taste of the major leagues. Then, in 2007, at the age of 28, he asked the Astros to move him to the mound. The next year, he made his major league debut as a relief pitcher with the Rangers.

As impressive as that line is, there are some caveats. To begin with, Gordon has been a tad lucky, with his opponents hitting .250 on balls in play. That may not be a major concern given his outstanding strikeout and walk rates, but Gordon doesn't have dominant stuff. Per the profile of Gordon written by Jack Curry, who first reported the Yankees' interest in him on Tuesday:

Gordon throws a four-seam and two-seam fastball, a split-finger fastball, a slider, a curveball and a recently added cut fastball. The right-hander’s fastball hovers from 89 to 91 miles per hour.

"I do my best to work in different combinations and try to keep hitters off-balance," Gordon said. "Being an ex-hitter, I know what got me. I have to pitch that way. I’m not going to blow anyone with velocity."

That approach has resulted in 9.6 strikeouts per nine innings over the last two seasons in the International League, but having that sort of success against major leaguers who have proven they can handle breaking pitches and changes of speed is a whole different ball of wax. Reduce that strikeout rate, and Gordon turns into a pitch-to-contact fly ball pitcher with middling velocity.

One can see why Brian Cashman might have been attracted to Gordon. To begin with, if Gordon is able to bring that Triple-A success to the majors, Cashman looks like a genius for swiping such a dominant pitcher from another contending team for nothing. Also, with interleague play coming up, Gordon provides an additional asset as he instantly becomes the best hitting pitcher on the team (sorry, CC). Still, this has to be infuriating to Noesi, who has been in the organization for six seasons and seemed to prove he was ready for this opportunity not by dominating Triple-A hitters, but with actual success in the major leagues (even if that success was also somewhat the result of luck on balls in play).

It's a bit infuriating to us for the same reason. Noesi is eight years younger than Gordon. If the Yankees can turn him into a legitimate major league starter, they have a team-controlled asset in the prime of his athletic life for the next six years. If Gordon proves to be legitimate, he's still going to turn 33 in August.

There's a certain grass-is-greener mentality going on here that is also evidenced by the recent additions of Cory Wade and Jeff Marquez to the bullpen at the expense of Kevin Whelan and, again, Noesi. For all of the praise the Yankees have received for drafting, signing, and developing pitching prospects, they continue to fill the openings that have emerged on the major league staff with imports, be they Gordon, Wade, and Marquez, or Colon, Freddy Garcia, Rafael Soriano, and Pedro Feliciano. A quick scan of that list is all that is needed to prove that those freely available imports, or even more expensive ones such as Javier Vazquez or Boone Logan, provide no greater guarantee of health or success.

As for Wade, he has a considerably higher profile than Gordon having been one of Joe Torre's pet relievers on the 2008 Dodgers team that made it all the way to the National League Championship Series. However, as is typically the case with Torre's pets, Joe hugged him and squeezed him until his arm fell off the next year. The result was surgery in 2010 to repair a frayed rotator cuff and labrum. Wade signed minor league deal with the Rays this past offseason and pitched well for Triple-A Durham only to prompt his release when he informed the team that he intended to use his June 15 opt-out if he was not called up to the major leagues.

At 28, Wade is less than a year older than Whelan, but he has already used up one of his option years, two of his team-controlled seasons, has that shoulder surgery on his medical chart. He is also more similar to Gordon in terms of approach than the hard-throwing Whelan. Both before and after his surgery, Wade's fastball has averaged around 89 miles per hour, while he uses his off-speed stuff (curve, change, rare slider) to keep hitters off-balance. Like Gordon, he's a strike-throwing fly-ball pitcher, which could spell trouble if he can't keep up his solid minor league strikeout rate (8.2 K/9 this season, 8.1 career). Given that his major league career mark is just 6.3 K/9, there's reason to worry, and good reason for Kevin Whelan to head back to Scranton frustrated, disappointed, and angry over having not been given the chance he deserved.