Just Dropped In to See What Condition Cano's Condition Was In*

Share All sharing options for: Just Dropped In to See What Condition Cano's Condition Was In* 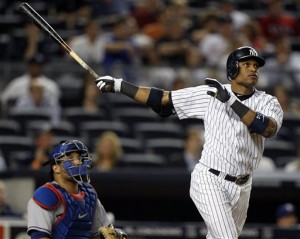 Balls are flying out of the yard for Robinson Cano, but his patience at the plate has been lacking. (AP)

When it comes to Yankees going yard, Curtis Granderson and Mark Teixeira have been getting all of the attention, and why not? Following Teixiera's two-step on Wednesday night, the duo is now tied with Jose Bautista for the major league lead with 21 homers. Meanwhile, the power exploits of Robinson Cano have largely escaped notice. Though he's no immediate threat to overtake his teammates, the second baseman has homered in each of the past two games to bring his season total to 14, the league's eighth highest total. He's on a 34-homer pace, which would top last year's career high of 29, but as nice as that is, his has been an uneven season.

Cano is hitting .286/.327/.518, which in the grand scheme of things makes him the majors' third most-productive second baseman according to True Average; his .298 trails only the Angels' Howard Kendrick (.306) and the Rays' Ben Zobrist (.302). That .298 ranks fourth on the Yankees behind Granderson (.333), Teixeira (.318), and Alex Rodriguez (.302). So it's not like he hasn't been productive, particularly at a position where offense is relatively scarce; the average AL second-sacker is hitting .247/.309/.367, the kind of performance around which you schedule bathroom breaks and beer runs. At the same time, while his True Average is nine points ahead of his career mark, it's 20 points down on last year.

Cano's on-base percentage is the third-lowest of his career, 54 points off last year's mark. In this year of declining offense, it's still five points ahead of the AL average, but if you park-adjust for hitter-friendly Yankee Stadium III as Baseball-Reference does, it's four points shy. Like nearly every important Yankee hitter, his batting average on balls in play (.288) is well below his career average (.320), and thus his overall batting average is a career low. His unintentional walk rate (3.3 percent) is his lowest since 2006, just over half of last year's mark (6.2 percent) and a step below his 2005-2010 career mark (4.2 percent). He's seeing just 3.24 pitches per plate appearance, again his lowest since 2006, well below last year's 3.46, and in fact, the second-lowest mark in the league; only Cleveland's Orlando Cabrera (3.02 P/PA) has been more impatient. He's striking out in a career-high 14.1 percent of plate appearances. Put it all together and his 4.33 strikeout-to-unintentional walk ratio is his worst since his 2005 rookie campaign, and again, well below his pre-2011 mark mark of 2.61.

The Yankees dropped 12 runs on the Rangers in each of the past two nights, the latter with one of the most makeshift lineups of the season, featuring Eduardo Nunez, Ramiro Pena, and Francisco Cervilli; that the first two of them homered in the same game ranks as only slightly less likely than Joe Girardi visiting the mound in a ball gown. Given that the team figures to be working with a lineup with the potential for three dead spots (catcher, shortstop and pitcher) as they head into interleague play over the next two weeks, the important thing is that Cano is back to being productive, not that he maintains an MVP-level stat line (Granderson is working on that). We can worry that such a contact-based hitter is getting too homer-happy, but unless he falls into a sustained funk (not the George Clintonian kind), worrying too much about the shape of Cano's season probably amounts to fretting about the upholstery of a Mercedes, the kind of complaint that nobody outside the luxury class really wants to hear. So until then, sit back and enjoy those frozen-rope homers as they come.

*Almost certainly the first Kenny Rogers reference on this blog not referring to former southpaw.