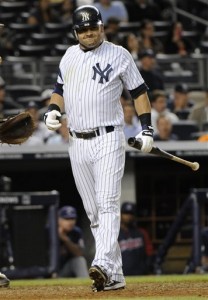 It was that kind of night for the Yankees — or was it? (AP)

Monday night's 1-0 loss to the Indians certainly felt like something Yankee fans witnessed before, in that a pitcher whom they'd never faced, one with a mediocre strikeout rate, kept them at bay. Twenty-four-year-old righty Carlos Carrasco came in with a 4.52 ERA and just 5.2 strikeouts per nine, though he had pitched shutout ball into the ninth against the Twins in his previous turn, and was once considered a blue-chip prospect, a big enough deal to be a key piece in the Indians' return for Cliff Lee back in the summer of 2009.

Well, Cliff Lee Carrasco ain't, but he tossed up seven zeroes and whiffed seven while allowing five hits and three walks against the league's second-highest scoring team. He was extremely shaky early, loading the bases with no outs in the first, putting two on with no outs in the second, and needing 45 pitches just to keep his slate clean. He wound up closing his night in strong fashion, retiring 13 out of the final 14 hitters he faced, beginning with an inning-ending Nick Swisher double play in the third; he needed just 42 pitches to do so. It didn't help that by that point the Yankees had hitless wonders Eduardo Nunez and Francisco Cervelli in the lineup, with the former having come on in relief of the injured Jeter (about which, more from Steve later today), but it's not like the big bats were patient either. Mark Teixeira and Alex Rodriguez whiffed on a combined six pitches in the fifth and six innings, and Robinson Cano collected singles on a pair of first pitches in the third and sixth, as the only Yankee to reach base over Carrasco's final 16 hitters.

In all, it was a night reminiscent of last year, when at times it felt like the Yankees couldn't buy a run from the likes of Brad Bergesen, Bryan Bullington, Kyle Kendrick, Kevin Millwood, Jamie Moyer, Sean O’Sullivan and Carrasco's teammate Josh Tomlin, a group of pitchers whose 2010 ERA and strikeout rates were virtually identical and horrid (5.01 ERA, 5.0 K/9) but who absolutely baffled the Yankees (1.45 ERA, 4.4 H/9, 5.5 K/9) in their initial meeting. As I pointed out at the time using Baseball-Reference.com's splits, the Yankees did not fare nearly as well against finesse pitchers (those in the bottom third of the league in strikeout rate) as they did against power pitchers. Here are their final numbers against them:

The two right-handed columns are the team’s adjusted OPS relative to their hitting as a whole (tOPS+) and to the AL performance in that category (sOPS+), with 100 being average, and number above 100 being better than average. While about 30 percent more productive than league average against power and neutral pitchers, those Yankees were merely average against the finesse ones; across the board, their stats weren't all that different against the three types. That's not at all the story this year:

Carrasco to the contrary, the Yankees have loaded up on such low-strikeout types, again about 30 percent more productive than league average. While their slash lines against the other two types look rather measly, they've still been better than average against those power and neutral types. This is more in line with the Yankees of recent memory; while they haven't been below average against such hurlers since 2004, last year was their low-tide mark during that span.

It should be pointed out that with a 92.5 MPH average fastball speed, no to mention some previously glowing scouting reports, Carrasco possess better raw stuff than a Millwood (89.0) or a Kendrick (89.6). The B-Ref classifications are results-based, not scouting or PITCH f/x based, so a hurler like Lee (10.1 K/9 this year) will be lumped into the power category despite a fastball that averages just 91.6 MPH. In other words, we're working with shorthand as to guys who miss bats by whatever means, as compared to guys who don't, not guys who simply throw hard compared to guys who don't. Other avenues of inquiry are certainly open, but to my knowledge nobody's aggregating the data along those lines at the moment.

With Jeter's injury, Russell Martin's absence, Brett Gardner's lunkheaded two-strike bunt, and all the early-count swinging, it made for a frustrating night in the Bronx. It was the fifth time this year the Yankees have been shut out; they were blanked only eight times last year. Nonetheless, some perspective is certainly in order, even beyond the fact that scoring is down leaguewide. The Yankees had just taken three straight from a division-leading team — albeit a slumping one that had lost 11 of 15 and was preventing runs at only a league-average clip — by a combined 24-8 score, a run that only started to erase the sting of being swept at home by Boston. The mounting injury toll is certainly a drag, but this club is 35-20 (.636) against non-Red Sox clubs, and still owns the league's second-best record and scoring rate as well as the majors' top run differential (+74). Don't jump out the window just yet.