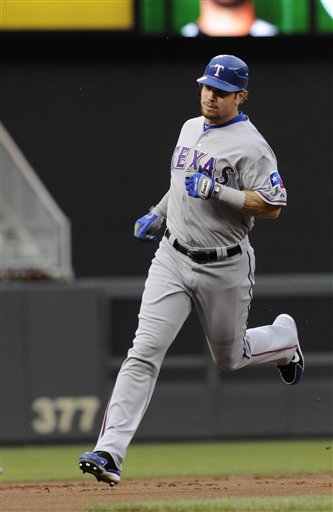 The Yankees haven't had to contend with Josh Hamilton yet this season, but will in this series (AP)

The Yankees finish their season set with the Rangers with a three-game set this week (weather permitting, of course), having previously taken two of three from Texas both at home and in Arlington. This, however, will be the first of those three series in which they'll have to contend with Josh Hamilton, who missed more than a month earlier this season with a broken humerus bone in his right arm. Not that Hamilton is lighting up the league right now (he has hit just .268/.307/.512 since his return on May 23), but the choice between facing the Rangers with Hamilton or without him is not a hard one to make.

The same can be said about Nelson Cruz, who did play in the first series against the Yankees, but went 1-for-10 with six strikeouts, then missed the second series. Cruz, who missed 20 days with yet another leg injury, returned with Hamilton on May 23 and has hit just .241 with two walks in twenty games since, but has also connected for eight home runs over that span while suffering from some lousy luck on balls in play (.235).

Overall, the Rangers are fourth in the league in runs scored per game (behind the Red Sox, Yankees, and Blue Jays), but as usual, they're less of a threat on the road, where they have hit just a third of their home runs (24 of 75) and are scoring just 4.03 runs per game (compared to 5.33 R/G at home). Fortunately for the Rangers, their runs allowed are similarly divided as they have allowed just 3.15 runs per game on the road (2.91 ERA) against 5.18 R/G (4.56 ERA) at home. Curiously, the Rangers' have a .606 winning percentage at home despite having scored only five more runs there than they've allowed, while they have a losing record on the road (16-18) despite outscoring their road opponents by 3o runs.

As for the first six games of this series. The Yankees took two of three from the Rangers in the Bronx in mid-April by a combined score of 14-12, with Matt Harrison pitching eight strong innings in game one, Freddy Garcia countering with six scoreless frames in game two, and the Yankees eking out a 6-5 win against old buddy Arthur Rhodes in the Sunday night finale.

The rematch in Arlington in early May saw Nova get his revenge on Harrison in game one, and Rhodes get his revenge by earning the win as the Rangers beat Bartolo Colon and Boone Logan in game two, only to take another loss in game three as the Yankees romped to a 12-5 win, the only game between the two teams thus far this year to be decide by more than three runs. As those summaries suggest, the bullpen has been a problem for the Rangers all year, and not just because of Rhodes

The Rangers enter this series have just lost three of four to the lowly Twins, nearly getting no-hit by Francisco Liriano in the finale on Sunday (a long bottom of the seventh, in which the Twins put up a four spot on reliever Mark Lowe, appeared have as much to do with breaking up Liriano's bid as Adrian Beltre's leadoff single in the top of the eighth). Prior to that, they dropped two of three to the surging Tigers, snapping a streak of four series wins and following an 11-3 run with a 2-5 skid. They are the defending pennant winners and have a two-game lead in the AL West, but their 36-31 record would only be good enough for third place in any other division in baseball.

Yahoo!'s Jeff Passan, one of the best baseball writers working today, had a tidy and informative piece on Ogando's unusual journey (or lack thereof) to the majors last week. The rest of the story, thus far, is that Ogando has lasted at least six innings in all twelve of his starts this season, only twice failing to register a quality start. Three turns ago, he gave up five runs in six innings to the Royals, and in his third start of the season, he gave up five runs in 6 1/3 frames at Yankee Stadium. He has only allowed as many as two runs in two other starts, leaving eight in which he has allowed one or no runs in six or more innings. In his last two starts, against the Tigers and Indians, he allowed just two runs in 15 2/3 innings while striking out 13 against three walks. He's a three-pitch pitcher, and rarely uses the third, a mid-80s changeup that drops down and in on righties. His fastball, which Passan notes has been "clocked as the fourth-hardest from a starter [and] looks even faster to hitters because of his funky delivery," averages close to 95 miles per hour, spiking into the high 90s, while his slider comes in at 80 mph, 15-plus miles per hour slower, with good movement down and in to lefties. The Rangers have won his last six starts (including that one dud against Kansas City), and Ogando himself is second in the AL in ERA and first in WHIP.

Fortunately for the Yankees, they have Sabathia matched-up against the Rangers surprising ace. Unfortinately, Sabathia has been prone to random bad innings in otherwise well-pitched games. Three of his last six starts have seen this phenomenon, with the worst being his last. In his first six innings against the Red Sox on Thursday, Sabathia held Boston scoreless on two singles and two walks, striking out five. Then, in the seventh, he gave up four runs on six hits and was pulled with two outs and runners on the corners (after which David Robertson let both of those inherited runners score as well). On May 24, it was a three-run third inning against the Blue Jays that nearly sullied a complete game victory. On May 14, also against Boston, it was another four-run seventh that saw him yield to Robertson with two outs (a three-run Adrian Gonzalez home run having cleared the bases for Robertson's entry).

Take out those three frames, and Sabathia has allowed just six runs (five earned) in his other 44 1/3 innings over his last six starts, that's a 1.02 ERA in those innings. Sabathia isn't getting himself into trouble with walks, but part of the problem might be that he's unable to get himself out of trouble with a well-timed striekout, as his 6.8 K/9 thus far this season is his lowest since 2004. Second to that, it just might be that Joe Girardi has to speed up his hook when Sabathia starts to look hittable after the sixth inning. Sabathia's ability to devour innings and rest the bullpen is part of what makes him such a special pitcher, but sometimes the Yankees might have to settle for six scoreless innings from the big guy.

In my Indians preview I wrote that Ivan Nova seemed to be pitching for his rotation life, and then he went out and turned in one of the best starts of his major league career (7 IP, 2 R) setting a personal season-high in strikeouts with six thanks to a particularly sharp curve and a sprinkling of changeups, cutters, and two-seamers. The next day, Bartolo Colon's hamstring gave out, and now Nova seems to have a bit more job security. Still, the Indians aren't hitting anyone right now, so facing the powerful, and finally healthy, Rangers lineup will be a much larger test. Nova aced the Rangers the last time he faced him, but Josh Hamilton and Nelson Cruz were on the disabled list at the time, and Hamilton was also missing when the Rangers scored five runs in 4 1/3 innings against Nova back on April 15.

As for the lefty Holland, he continues to be frustratingly inconsistent. Two turns age he shutout the Indians. His last time out, he struck out ten twins in 7 1/3 innings but coughed up four runs on a pair of homers as the Rangers lost. That shutout was the only one of his last four starts that was quality as he has given up six home runs over that stretch (2.1 HR/9). However, he also struck out 26 men in 26 innings over those four starts. His two starts before that were both quality, but just one of five before that was, including a blown quality start against the Yankees on April 16 and a disaster start against them on May 7. His fastball sits around 94, his slider misses bats, and he has been much better on the road than at home (by game score, his top five starts have come on the road, where his ERA is more than three and a half runs below his home mark), but two of his last three road starts were frustrating as well.

Noesi (who has not officially been named Thursday's starter) would be making his first major league start, taking the place of the injured Colon, doing so on the heels of his eye-catching six-innings of relief against Boston last Tuesday. Noesi will have had eight days off in between appearances (though he was optioned down to Scranton following that outing, he didn't pitch before Colon's injury led to his recall and, in fact, hasn't thrown a minor league inning since May 8), but he had nine days off before that last outing and pitched beautifully. Of course, he also pitched lucky. In the minors, Noesi was a control artist with a solid strikeout rate who gave up a lot of fly balls. In the majors, he has walked just one man in his last 11 1/3 innings (that's everything but his major league debut, in which he walked four), but has also struck out only two over that span. So his big-league opponents have made a ton of contact, but have hit just .217  on balls in play against Noesi, and have indeed hit a ton of fly balls, but only one (David Ortiz's homer in that last appearance) has left the park. That luck could run out in a hurry with increased exposure, or he could remember how he struck out 8.6 men per nine innings in the minors and give Nova a good run for his money in terms of who gets bumped when Phil Hughes returns from his thus-far-encouraging rehab assignment.

C.J. Wilson enters this game coming off five straight quality starts (3-1, 2.60 ERA, 0.98 WHIP, 8.6 K/9, 3.00 K/BB). The Yankees haven't faced him since the ALCS. The two games he started were the only two the Yankees won in that series, but he turned in a quality start in Game One (the Yankees beat the Rangers' bullpen, not Wilson), and was bothered by a blister in Game Five. The Yankees faced him three times during the 2010 regular season, his first full season as a starter after 237 consecutive relief appearances over five seasons. In each of those three starts, Wilson walked three and struck out five, and his overall results were similarly middling as the Yankees forced him to throw a lot of pitches each time out and bounced him early in the latter two appearances. The lefty-handed Wilson leads with a pair of low-90s fastballs (four- and two-seamers) and does a good job of mixing in his slider, changeup, curve, and cutter, the first of which misses the most bats.