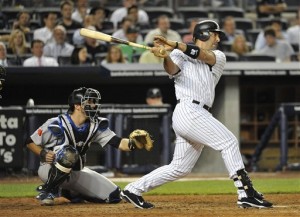 Though he's still shy in the power department, Jorge Posada's stroke is starting to come around. (AP)

Between the losses of Joba Chamberlain and Bartolo Colon and the sweep by the Red Sox in the Bronx, it wasn't exactly a banner week for the Yankees, but that doesn't mean there aren't good things happening around the margins. For one, the hits have finally been falling in for Jorge Posada, who has five multi-hit games out of his last six, a span during which he's gone 13-for-22. Save for one of those hits — the June 5 double off Joel Pineiro which began the whole streak —they've all been singles, so they've only been so helpful, but beggars can't be choosers. When a good hitter falls into an extended slump, he usually finds his way out of it by returning to the fundamentals, and by not trying to do too much; six-run homers that can undo yesterday's loss are quite rare in the real world, so better to settle for an opposite field single.

Of course, some of Posada's resurgence has to do with being shielded from lefties; he had gone 0-for-24 with six walks prior to the Big Sitdown, and made just three plate appearances against southpaws over the next four weeks before collecting a pair of hits in relief of the injured Mark Teixeira last week. He added a single off Cleveland reliever Rafael Perez on Saturday and is now 3-for-32 in that split, still awful but at least not an o-fer. Despite a virtually even platoon split for his career, Posada may never regain his lineup foothold against southpaws; Andruw Jones has started nine out of the team's 10 such games since the drama went down, either at DH or in left field, with Eduardo Nunez often joining the fray and Jeter DHing in the latter case, a pair of moves that isn't helping anyone. Jones hasn't had great success in that span, but lefty-mashing is what he's been brought in to do, and his .245/.302/.531 line in 53 PA against southpaws is about par for his late-career course.

With the struggles of older designated hitters such as Posada, old friend Hideki Matsui (hitting a bare .216.268.332 for Oakland) and Adam Dunn (.180/.322/.335 for the White Sox, including an impossible-to-fathom 1-for-47 against lefties), there exists a perception that DH production has somehow hit a nadir. I spent a bit of time on Twitter last week countering that notion, so I might as well present the data here. AL DH production is in a slightly different shape than the last few years, but in the context of lower-offense environment — AL scoring is down 2.5 percent — it's actually more valuable. Here's a chart of the past eight seasons, since the point when scoring was last above 5.0 runs per game:

As you can see, AL designated hitters — I'm not including those fly-by-night NL ones who pop up in interleague play — are actually enjoying a small renaissance, with David Ortiz helping the cause by hitting .325/.395/.624. The last time DHs topped a 111 OPS+ was in 1999, when they were at 113, one point lower than their all-time high the year before. They haven't been below 104 since 1993, when scoring and home run rates began their sharp climb. DH production has trended downward ever so slightly in that span, but it's still higher than it was when the position was initially introduced: 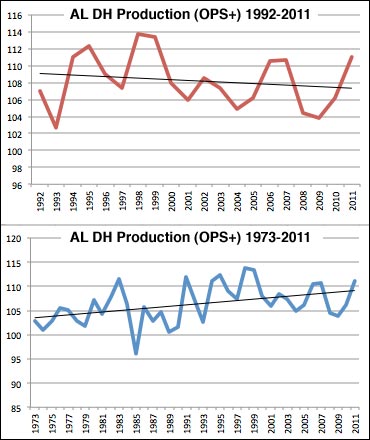 All of which is to say that while Posada's hardly enjoying a banner year, his overall performance isn't as bad as it looks once you put it in context, because he's finding his way on base (though as this weekend's gaffes on the basepaths show, he's undermining his comeback somewhat). The Yankees may still be better off with an upgrade, whether it's Jesus Montero or a player from outside the organization, but Posada's resurgence is buying time, for himself, for the slumping Montero (.289/.333/.408), and for the trade market to open up.

Speaking of Montero, the aforementioned link to a Bob Herzog article is behind Newsday's paywall, but it's available via their iPhone app. Summarizing, since the info there doesn't seem to be making its way around the Yankeesphere:

• The 21-year-old catcher missed four games last week and is frustrated because he doesn't think he's been playing enough.

• Batting coach Butch Wynegar says, "He's pressed a bit lately, trying to hit home runs," and thinks that Montero has gotten a bit pull-happy, an assessment with which Montero disagrees.

• Wynegar didn't mince words about Montero's focus. Money quote: "There are no doubts about his tools. But he's such a good hitter that he sometimes takes hitting for granted... he's so confident in his ability that, mentally, sometimes he wavers a bit. A part of me thinks he's a little bored here. He thinks he's just passing through. But he still doesn't understand how tough it is at the big-league level, especially the mental adjustments."