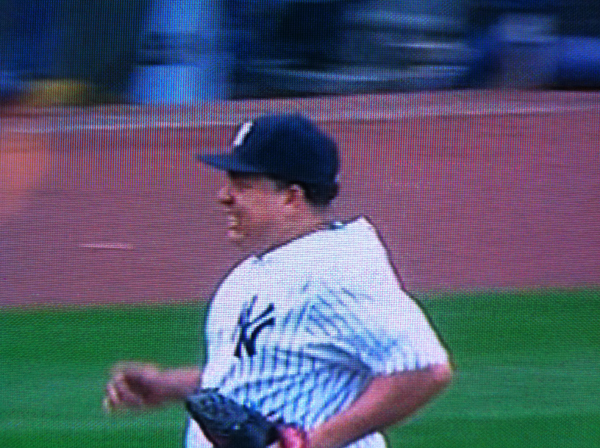 Bartolo Colon's grimace says it all.

The Bartolo Colon Miracle Comeback Express came to a grinding halt on Saturday at Yankee Stadium. Covering first base during the seventh inning of a start in which he'd dominated the Indians, the 38-year-old came up limping with an apparent leg injury, forcing him from the game. The early news via Jack Curry is that he's suffered a strained left hamstring, which almost certainly means a trip to the disabled list, though the Yankees aren't likely to decide until just before Sunday's game. Without any word on the severity of the injury, but with the Yankees' conservatism on such matters in mind, one has to figure that a best-case scenario including a rehab start would bring him back right after the All-Star break.

Colon has been nothing short of a revelation thus far, easily the Yankees' second-best starter after CC Sabathia despite coming to camp on a minor league deal. Through 13 appearances and 10 starts, he has posted a 3.10 ERA while striking out 8.3 per nine (ninth in the league) with a 4.0 strikeout-to-walk ratio (tied for third). He has dominated hitters, pounding the strikezone relentlessly with a combination of two- and four-seam fastballs, getting enough movement to lead the league in strikeouts looking, and going deep into games. Saturday was the third time in his last five starts he'd pitched low-hit shutout ball into the seventh, and he now leads the Yankees in quality start percentage (70 percent) while ranking second in innings per start (6.7). Even before Saturday's shutout ball, his 3.31 SIERA was the lowest among Yankee starters by two-thirds of a run. No matter how you slice it, it's been an amazing revival for a pitcher who didn't pitch professionally in 2010, who hasn't been healthy and effective since 2005, and who is back in action only after undergoing an experimental stem cell procedure last year, one which has drawn scrutiny from Major League Baseball. His every start has been must-see TV, and the saddest note about all of this is that the Yankees simply won't be as much fun to watch without him.

Of course, anyone paying attention had to know that Colon's good fortune — or that of Freddy Garcia — could disappear just as quickly as it appeared; towards that end, the Yankees sent Hector Noesi back down to Scranton this week with an eye towards keeping him stretched out, even given a bullpen weakened by the loss of Joba Chamberlain. Noesi had shown impressive poise while working a four-pitch arsenal in some extended stints out of the bullpen (four appearances, 15.1 innings, and a 1.76 ERA), good enough to put Ivan Nova on notice that his rotation spot in the rotation could be in jeopardy. Nova made a strong case for his continued presence on Friday, allowing just seven baserunners and two runs in seven innings while striking out six, and working in his changeup as well as his curveball, even when behind in the count.

Noesi will indeed be back, but it's somewhat puzzling to hear via Newsday's Ken Davidoff that it will be to replace Amauri Sanit, who was pummeled in relief on Friday. Meanwhile, David Phelps, D.J. Mitchell or Adam Warren — the trio initially cited by Brian Cashman as candidates to help fill the bullpen in Chamberlain's absence — are apparently candidates to replace Colon. Consider this a fluid situation; if plans changed that quickly, they can change again. In other programming news, Brian Cashman will join Jon Stewart on The Daily Show for an Indecision 2011 feature.

The Yankees have until Colon's next turn would fall, on Thursday afternoon against the Rangers, to make up their minds. By that point, Phil Hughes will have also made his first rehab start for the Gulf Coast League Yankees, and the team will have a clearer timeline as to his return. He's not likely to be back before the end of June, but it says here that the young guy without the hamstring problem and the additional poundage is a good bet to beat the old lumpy guy's timeline. In any event, the rotation juggling act for which some wished has begun, and it's no surprise that it's not under optimal circumstances.