Share All sharing options for: Series Preview: Yankees vs. Indians 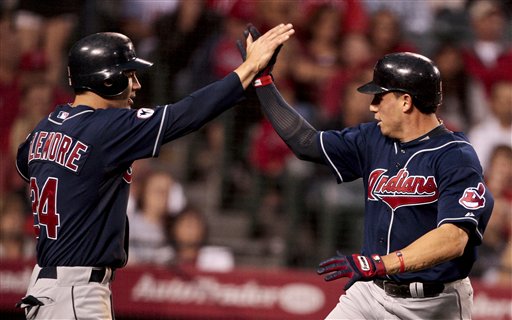 Grady Sizemore and Asdrubal Cabrera helped the Indians party like it's 2007 early this season, but it seems the clock has already struck midnight on the Tribe's unexpected postseason hopes. (AP)

The Cleveland Indians, a team in the midst of a dramatic rebuild, were one of the biggest surprises of the first two months of the 2011 baseball season. On May 23, they were 30-15 (.667) with a seven-game lead in the American League Central, the largest division lead in baseball at the time. Since then, however, the bloom has come off the rose. The Indians have won just four of their last 15 games (4-11, .267), are coming off a series loss to the lowly Twins, who seemed to switch places with the Tribe by simultaneously touching a mysterious skull, have shed all but one game of that seemingly comfortable lead in the Central, and seem likely to be overtaken by the resurgent Tigers (who have won nine of 11) any day.

For those wondering if the Indians were playing over their heads. There's your answer (and the fact that their actual record is still better than their third-order record suggests their fall is not yet complete). As I wrote in the Indians essay in Baseball Prospectus 2011, one can see the potential in the top two thirds of the Indians' lineup, where 28-year-olds Grady Sizemore, back from nearly two seasons lost to injury, and Shin-Soo Choo are the veterans, Asdrubal Cabrera is having an MVP-quality season at shortstop at age 25, and Carlos Santana, Michael Brantley, and Matt LaPorta (25, 24, and 26) are finally seeing their major league careers take root. Left fielder Nick Weglarz (currently recovering from meniscus surgery in his left knee), second baseman Jason Kipnis, and third baseman Lonnie Chisenhall could arrive to round out that starting nine by year's end. Still, it seems clear now that the Tribe's early-season offensive outburst was more a warning shot than the proper arrival of the team's full artillery.

Indeed, Cleveland has averaged just 3.24 runs per game over its last 21 contests compared to 5.31 runs per game over its first 39. Similarly, the Indians have allowed 6.07 runs per game over their last 14 contests compared to just 3.65 R/G allowed over their first 46. The Indians are not without talent or potential, but they are not a legitimate contending team in 2011. They don't have the pitching, particularly in the starting rotation (I profile four of the five Cleveland starters in the pitching matchups below), and their hitters are too inconsistent, be it due to age (on both ends of the spectrum thanks to Travis Hafner and Orlando Cabrera), injury, or both.

Over his last eight starts, Nova has posted a 3.43 ERA and turned in five quality starts (missing a sixth by just two outs) with roughly league-average results on balls-in-play. Still, his weak peripherals over that stretch (4.0 K/9, 1.18 K/BB) and over-reliance on his four-seamer and curveball have prompted continued speculation about his ability to remain in the rotation. As Jay mentioned on Thursday, bumping Nova to the bullpen and inserting Hector Noesi in his spot in the rotation could improve both units immediately while simply subbing one 24-year-old rookie starter for another, costing the Yankees almost nothing in terms of long-term value or team-controlled seasons. Nova is starting to work his two-seamer in more often, and actually made good use of his changeup and threw a trio of cutters in his last start, six quality innings against the Angels, so perhaps he's getting the message. Either way, with Phil Hughes set to begin a minor league rehabilitation assignement, Noesi having impressed in a six-inning relief appearance against the Red Sox, and the bullpen increasingly desperate for a live young arm with a 93-plus-mile-per-hour heater and a good curveball who has held opposing batters in their first plate appearance of a game to a .224/.311/.336 line, Nova's every start feels like an elimination episode of a reality television talent competition. So you think you can start, Ivan Nova? Pitch for your life.

In 2007, when CC Sabathia won the Cy Young award and the Indians barreled past the Yankees to get to the seventh game of the American League Championship Series, Cliff Lee was an afterthought and Sabathia's dominant number-two was Fausto Carmona, who came on like a younger, better version of Chien-Ming Wang, dominating with a hard, heavy sinker that hit opposing bats like a bowling ball. His player comment in the 2008 Baseball Prospectus annual, a book Steve and I co-edited, concluded with, "If he turns out to be a better pitcher than C.C. Sabathia for the remainder of the decade, we won't be shocked." Heh. Oops.

A hip injury shut down Carmona for two months in mid 2008, but his control was awful both before and after that DL stint. More control problems as well as a reduced ground-ball rate in 2009 prompted the Indians to send him back to Triple-A for a spell, much like they did with Lee in '07. Last year, Carmona shaved nearly two walks per nine innings off his walk rate and made the All-Star team, but looking back, he was not much better than league average. This year, his peripherals are finally back to their 2007 levels (5.7 K/9, 2.5 BB/9, 2.25 K/BB), but his ability to induce groundballs has yet to return to pre-2009 levels and a spike in extra-base hits, particularly home runs has inflated his ERA to 5.33. He's not only not only not the ace of the Indians' staff, which was hardly well regarded coming into the season to begin with, but he has been, unarguably, their worst pitcher thus far this season.

With Talbot out of options coming of a season largely lost to an ulnar collateral ligament tear in his pitching elbow (but not Tommy John surgery), the Rays flipped him to the Indians for catcher Kelly Shoppach in December 2009. Talbot was overflow in the pitching-rich Rays system, but in Cleveland he slid right into the major league rotation, albeit with underwhelming results that matched his underwhelming stuff (90 mph four-seamer, 80 mph change, with a slider and cutter in between). This year, Talbot pitched well in his first two starts only to land back on the DL with more discomfort in his UCL (officially a sprain). Since returning, he has made one disaster start followed by two quality ones. Talbot faced the Yankees twice last year, turning in a quality start the first time, then walking four men over the course of seven batters in the second and third innings of his next start, prompting Manny Acta's hook with no outs in the third.

Not to be confused with Talbot, who is roughly the same size and weight, throws with the same hand, and was born just a year and two days earlier, Tomlin, 26, is a soft-tossing righty who made his major league debut with seven strong innings (3 H, 1 R, 0 BB) against the Yankees late last July. Tomlin nearly matched that performance exactly in his season debut against the Red Sox this year and ran off eight more quality starts in a row after that with the aid of a .175 BABIP. The worm turned three starts ago. Tomlin has allowed 16 runs in his last 18 innings (and 12 in his last 12 over two starts), thanks in part to a .387 BABIP. Balls in play are a huge part of Tomlin's game, because he strikes out barely more than five men per nine innings and is leading the AL in walk rate (1.3 BB/9). He's also a fly-ball pitcher with an 88-mile-per-hour fastball and no real out-pitch (though he can miss bats with his cutter and curve).

Freddy Garcia has similar contents, albeit in a bigger, older package. Garcia does strikeout more men, but he also walks more than twice as many. He's looking to rebound from one of the worst starts of his career.

Acquired from the Phillies in the Cliff Lee trade, Carlos Carrasco was once a legitimate prospect, and he still has good stuff (a pair of 93 mile per hour  fastballs, a good change, curve, and slider), but at age 24, in what projects to be his first full major league season, he's still finding ways to frustrate his team as much, if not moreso than opposing hitters. After a disaster start his first time out, Carrasco seemed to find a groove only to land on the DL with elbow inflammation at the end of April. Since returning, his control has improved, but the strikeouts still aren't there, nor is the consistency. He held the Twins scoreless for 8 1/3 innings in his last start, but that was the Twins, after all, and in the start before that he gave up six runs (five earned) to the Rangers in six innings in Cleveland.

The deeper we get into the season, the more A.J. Burnett's pitching line looks more like last year's than it does like his career rates. His saving grace thus far has been a .245 opponents' average on balls in play (vs. .323 last year), but even that hasn' t been enough to help him to consecutive quality starts, not that he has to worry about that having just given up eight runs (seven earned) in 5 2/3 innings against the Red Sox on Saturday.