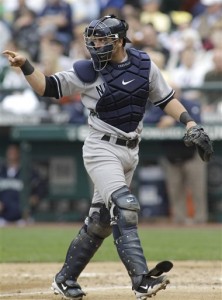 Cervelli is a spunky, likable character, and when he has some success on the field, he's like a sugared-up Little Leaguer pumping his fists and high-fiving. He's damn happy to be in the major leagues and it shows, and there's something endearing about that; contrary to my most infamous tweets in the heat of battle, I personally wish him no physical harm. Unfortunately, it's abundantly clear that Cervelli has serious work to do in order to remain a viable major leaguer, even as a backup.

Catcher defense is tough to evaluate by the numbers, but consider the following. Over the past two seasons, 39 catchers have caught at least 675 innings, a cutoff I've chosen so as to include Jorge Posada. Cervelli has caught 825, which ranks 34th; he has 91 starts, a fairly typical workload for a single-season job share. Given that limited amount of playing time, it should come as a shock that no catcher has made more errors than Cervelli's 18. Brian McCann has 17, albeit in nearly twice as much playing time (180 starts, 1586 innings); the two have both made 13 errors on throws in that span, while the rest are glove-related errors. Expressed as a rate stat, errors per 100 innings, Cervelli's 2.18 is 71 percent higher than the next-highest player, Jason Kendall; in other words, he dominates the category. Russell Martin, at 13 errors in 1217 innings, is tied for the third-highest total, and at 1.07 per 100 innings, has the sixth-highest rate.

Turning to his ability to control the running game, it's clear from the numbers that Cervelli does anything but. Only five of the 41 catchers in question have allowed more stolen bases per nine than his 0.8: Victor Martinez, Jorge Posada, Jason Kendall, Ryan Doumit and Geovany Soto. Martinez and Posada are now primarily or entirely designated hitters, Kendall is recovering from career-threatening major shoulder surgery, Doumit has all but been run out of Pittsburgh for his defensive inabilities, which have trumped the above-average offense he's capable of providing as a backstop, and Soto has had a long streak of shoulder problems, including offseason surgery last September. In other words, every other catcher who allows stolen bases more often than Cervelli has required some form of medical intervention, self-preservation being a legitimate medical category. As for actually catching would-be base thieves, Cervelli's 13.1 percent caught stealing rate is — you guessed it — the lowest among this group, just ahead of Doumit (14.3 percent) and Posada (15.3 percent). By comparison, Martin is a star in this department; his 0.5 SB/9 ranks 11th out of 41, while his 35.1 percent caught stealing rate is ninth.

By Baseball-Reference.com's reckoning, Cervelli's defense has been a major league-worst 12 runs below average over the past season and a third, just ahead of Doumit (-11) and Posada (-10 — and remember, that's in the lowest amount of playing time in the survey); Martin is four runs above average. If Cervelli had the offense to make up for it, then it would be forgivable, but he doesn't; his 87 OPS+ is 24th of the 39 catchers with at least 300 plate appearances in that span. His .265/.351/.338 line is certainly passable for a defensively average backstop, but it's not enough to dig him out of his hole.

Given Cervelli's woes and the fact that Martin has been banged up enough to sit in five of the last 10 contests, it's time for the Yankees to take advantage of their organizational depth at catcher. I'm admittedly more ambivalent than ever about Jesus Montero's long-term prospects behind the plate, but there's hardly any way he could be worse defensively than Cervelli, who is fast becoming a league-wide laughingstock. Even if Montero's bat isn't quite on track, it may be time for the Yankees to see if their phenom can give the big club any help behind the plate.

More Joba
I've got the lead article at Baseball Prospectus today, integrating much of what Cliff and I had to say about Chamberlain's injury and the existing options within the organization, along with some additional thoughts about the rotation, particularly Hector Noesi and Ivan Nova.