Joba, Over and Out

Share All sharing options for: Joba, Over and Out 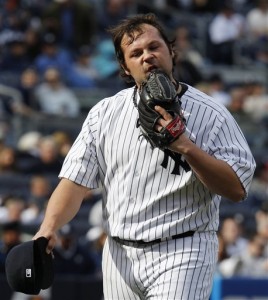 It's going to be a long time before Yankee fans get to watch Joba Chamberlain pump his fist or shout into his glove again. (AP)

Wednesday's announcement that Joba Chamberlain would head to the disabled list with a strained flexor muscle was enough to cast a pall over the Yankees as they headed into the second game of their three-game set with the Red Sox. Given a bullpen full of D-list relievers, manager Joe Girardi left struggling starter A.J. Burnett in to absorb a pounding on a night when he clearly didn't have his best stuff. Burnett was already in a 6-0 hole in the fourth when Girardi (or was it pitching coach Larry Rothschild? I was in the cheap seats) visited him on the mound and presumably told him he wasn't getting out of this mess so easily, a situation that brought to mind a classic story I read years ago about a minor league pitcher-turned-college professor who was once left in to absorb a 20-something run pounding. "If you think I’m going to waste another pitcher on this game, you’re crazy," the skipper told the hapless hurler.

I'd strongly advise going back to read that story and milking what laughs there are to be had there, because the news from the Bronx is no laughing matter. The team just announced that Chamberlain's problems are worse than that a flexor strain; a dye contrast MRI revealed that he has a torn ulnar collateral ligament and will need Tommy John surgery, ending his season. The news is obviously a blow to a bullpen that's already making do without one of the relievers expected to do the heavy lifting in front of Mariano Rivera in Rafael Soriano, who hasn't pitched since May 13 due to elbow inflammation, and who isn't expected back until sometime in mid-to-late July. Of the team's big three setup men, only David Robertson (who has been huge) remain active.

The news is an even bigger blow to Chamberlain, of course. The 25-year-old righty had been throwing the ball well this season, striking out 24 hitters while walking just seven and yielding three homers in 28.2 innings. Chamberlain's 2.83 ERA was more than a run and a half below last year's gaudy 4.40, mainly due to a 60-point drop in batting average on balls in play (from .327 to .267); his Skill-Interactive ERA — SIERA, which takes into account strikeout, walk, flyball and groundball rates — for the two seasons isn't that far apart, 3.04 this year, 3.16 last year.

While Chamberlain's fastball velocity remained more or less unchanged from 2010, he had returned to using his curveball as a weapon. On Tuesday — eons ago, as far as this narrative arc goes — the Star-Ledger's Marc Carig wrote about Chamberlain's renaissance:

More and more, Chamberlain is featuring the pitch in tight situations, and it has translated into a revival..."Stuff is back, throws strikes," said one opposing scout, who requested anonymity so as to not speak openly about another organization’s player. "He’s nails."

For Chamberlain, the curveball was an evolutionary vestige from his days as a starting pitcher, when he was expected to get through a lineup more than once. Even though he cut down its use last season — rife with inconsistency — Chamberlain retained the feel on his curve.

..."[It] just allows me not to throw my slider as much," Chamberlain said. "You see something with a different spin, then it just allows my slider to be the pitch it has been in the past."

Chamberlain still relies on his slider as his primary out pitch. But his curveball use has jumped from 7.3 percent last season to 12.2 percent this year, the highest rate of his career.

Sadly, it's back to square one for Chamberlain, who's likely to be absent the major league scene until next June or July. His injury comes as something of a shock.

Chamberlain and the Yankees are perplexed. He never felt the ligament tear and his only symptom is some tightness after throwing. Chamberlain’s velocity has been good and he’s been able to throwing breaking balls, which usually cause pitchers considerable pain when they need Tommy John. Chamberlain also has no problem doing little things — opening a door, twisting off the cap of a water bottle — which usually cause some discomfort for Tommy John candidates.

"Joba must have a high pain threshold," Joe Girardi said. "In the future, if he was to say something, you would have to say it might be worse than he is leading on. I’m watching him do things today, things that are supposed to bother a guy that needs Tommy John. It’s not bothering him at all. The lesson to be learned: The body’s an interesting thing."

As Cliff wrote earlier, the Yankees' in-house options to replace Chamberlain even in the short term are for the most part unimpressive; the current bullpen besides Mariano Rivera and David Robertson consists of Boone Logan, Luis Ayala, Lance Pendleton, Amauri Sanit and Jeff Marquez, none of whom are A-list relievers. While there are interesting projects to be found at Scranton and Trenton, no obvious solutions to the team's needs in this department are on hand. Here it's worth noting that Mark Prior, who earlier this season looked as though he could provide relief at some point, is on the disabled list with an abdominal strain (he has not had hernia surgery, contrary to a previous report).

Undoubtedly, Brian Cashman will be working the phones to scare up some help from outside at some point this summer, but in the short term, it's worth bringing back Hector Noesi, who has done impressive work out of the bullpen, posting a 1.76 ERA in 15.1 innings spread out over just four appearances. The Yankees sent him back to Scranton after Tuesday's six-inning effort because they want to keep him stretched out, a sure sign that Ivan Nova remains on thin ice and that the team is taking little for granted when it comes to the health of Bartolo Colon and Freddy Garcia. They could consider moving Noesi — who hasn't been afraid to use four pitches — to the rotation and Nova into the bullpen, which may ultimately be a better spot for a guy who's struggled to establish a third pitch or to get through the batting order a third time.

The return of Phil Hughes should help matters, assuming he stays on track. According to WFAN's Sweeny Murty, Hughes threw 92 MPH in a simulated game today (Thursday) and will make a rehab start for Tampa next Tuesday. In an ideal world, he would slot into the rotation in place of the weakest starter (at the moment, Nova) upon returning, but if history is a guide, the Yankees will be sorely tempted to restore Hughes to the setup role in which he thrived during the last four months of the 2009 season, when he posted a 1.40 ERA, 11.4 strikeouts per nine, and a 5.0 strikeout-to-walk ratio in 51.1 innings.

Which isn't to say that's the right move at all. If the Pinstriped Bible Study Group has told you once, we've told you a thousand times: starters are far more valuable and far tougher to come by than relievers, and returning Hughes to a setup role will certainly revive the discussion about the Yankees' indecision when it comes to their young pitchers, the one in which Chamberlain was Exhibit A. With further success out of the bullpen, not to mention a spotty track record for health, Hughes may be in just as much danger of being pigeonholed. To his credit, Cashman has already made an effort to head that idea off at the pass; as YESman Jack Curry tweets, "Cashman told reporters Hughes will remain as starter so he's not option 4 pen. The GM also said Banuelos, Betances, Brackman arent ready."

Balancing the near- and long-term needs of a contending ballclub is a difficult task under the best of circumstances, but with Chamberlain's injury on top of Soriano's injury and Hughes' previous ineffectiveness, the Yankees are in far from the best of circumstances now, even if they are only a game out of first place in the AL East and currently leading the Wild Card race. Cashman and company have much to ponder as they decide between shoehorning some of the organization's best arms into suboptimal roles at the potential expense of future development, or patching their battered bullpen with chewing gum and waiver bait. It's not as easy a decision as it looks, and nobody should envy the man's task.