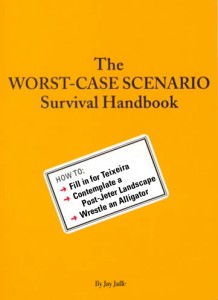 Pondering what would happen if various Yankee regulars went down for an extended period of time isn't as much fun as wrestling an alligator.

The Yankees got a major scare on Wednesday night against the Red Sox when Mark Teixeira was struck on the knee by an errant Jon Lester pitch during his first inning plate appearance. In watching him writhe on the ground in agony until he could be helped off the field, it wasn't a stretch to assume that Teixeira could have fractured his patella, an injury which at best would have cost him a couple months and at worst would have not only ended his season but carried longer-term implications in terms of mobility and flexibility.

Fortunately, Teixera only suffered a bone bruise and is day-to-day, likely to sit for a short spell but avoid the disabled list. Nonetheless, the short stretch of uncertainty had me thinking about how the Yankees might juggle their roster in the event of a medium-term injury to any one of their regulars — one in which they knew they'd be getting said player back after a couple months absence, and thus would be less inclined to make a trade to cover themselves for the remainder of the season, but would have to make do for a significant spell. What follows is some kind of Not-Quite-Worst-Case Scenario Survival Handbook* as to how the Yankees might cover themselves, not that they wouldn't suffer mightily in many cases if forced to run their backup out there on a regular basis.

First Base: While losing Teixeira would have been a major blow to the offense given his current productivity, the Yankees would have no shortage of internal options to cover the position. The most obvious solution would be to move Nick Swisher to first, where he has 256 games (192 starts) of big league experience, and to sally forth with a Chris Dickerson/Andruw Jones platoon in right field, more on which momentarily. Additionally, Jorge Posada, who has 30 games and 16 starts at first, could figure into the picture against righties if his bat continues to show some life. After going 3-for-3 off the bench last night in Teixeira's stead—including his first two hits of the season against lefties—he's hitting .260/.374/.351 since May 1, which is certainly slappy but not entirely useless. Eric Chavez, who's nearing a return to baseball-related activities, could eventually take at-bats against righties as well, and at some point, the Yankees would probably take a look at righty-swinging Jorge Vazquez, who has already mashed 19 homers at Triple-A Scranton while batting a lopsided .280/.326/.564.

Second Base: The Yankees' options for covering the keystone are rather grim in the event of a Robinson Cano absence, with some combination of Eduardo Nunez and Ramiro Pena functioning as the path of least resistance. It's worth noting that Kevin Russo has been playing second regularly at Scranton/Wilkes-Barre — in fact, most of his minor league experience is there — but he's hitting just .262/.327/.366. He has made only two errors in 39 games, but his 3.92 range factor (putouts plus assists per game) is lower than all but two regular second basemen in the league, a clue that his defense probably isn't enough to survive at the big league level.

Shortstop: Nunez and Pena, whose combined presence would certainly reanimate the Village Green Derek Jeter Preservation Society, particularly given Nunez's sloppiness afield. Polite adults don't rely on fielding percentage, but I never went to cotillion, and anyway, when you're fielding at an .833 clip (five errors in 30 chances), you are most assuredly doing it wrong. The barren landscape offered by such a futile arrangement might prompt Brian Cashman to make a deal for a more big league-ready alternative to Jeter, but that's beyond the scope of this piece.

Third Base: The path of least resistance would call for plenty of Nunez and Pena until Chavez is ready. If Joe Girardi smoked what Joe Torre was smoking, the team could spot Russell Martin at the hot corner (his pre-conversion position), which could create some space for Jesus Montero (still hitting a relatively uninspiring .294/.336/.416 at Scranton) to assume some of the catcher duties. Not likely, but not impossible. Another relatively improbable option would involve Brandon Laird, Scranton's regular third baseman and an object of wintertime fascination around these parts; he's hitting a disappointing .275/.306/.392 with three homers this year after bopping 25 homers between Trenton and Scranton last year.

Center Field: The way he's swung the bat this season, Curtis Granderson is virtually irreplaceable, but again, the solution is rather apparent, as the Yankees would slide Gardner over and go with a Dickerson/Jones platoon, possibly with a spot of Maxwell, who is more experienced in center than anyplace else.

Catcher: As has been discussed exhaustively, the Yankees have plenty of catching depth in their organization. An injury to Martin would create an opening for Montero, with Francisco Cervilli on hand as something of an insurance policy; if not a particularly inspiring one, he is at least no Gustavo Molina (or no Drew Butera, to plug today's soup du jour over at Baseball Prospectus). Austin Romine is hitting .298/.362/.421 at Triple-A, though he did just land on the disabled list due to concussion-like symptoms.

Designated Hitter: The most obvious solution, and one that may happen even without a catastrophic injury to Posada — murmurs of his possible release have been floating about via the ESPN New York yakkers — would be to recall Montero and just let him hit. A platoon between Chavez (when healthy) and Jones is another scenario, particularly if Montero doesn't pick up the pace at Triple-A, and there's always the opportunity simply to rotate players in and out of the slot for a half-day off here and there, though that would likely mean far too much Nunez for anyone's taste.

What this stroll through the organizational depth chart makes clear is that an injury to Teixera would actually be one of the easier circumstances for the Yankees to cover. Couple that with the ease of filling the DH slot and the difficulty of finding adequate replacements in the middle infield, and we've essentially reiterated the basic rule of the defensive spectrum, which is that there's a wider array of options available to fill offense-first positions than defense-first ones. In any event, the Yankees are fortunate they don't have to test any of these routes, but as the team learned when Posada went down in 2008, catastrophe is always lurking around the corner, and it pays to be ready to meet the challenge.

* I grew up with one of the authors of the Worst-Case series, which is now at least 10 books strong, and I'm alternately amused and chafed by their popularity. Carving out a living as a professional writer is difficult work no matter what niche you land in, and while the impulse buy/gift book genre may be lucrative if you strike it big enough to generate a licensing deal, I imagine that short of such success it's less fulfilling than writing about sports on a daily basis.