Noesi Points Out the Way to Salvation is Inward

Share All sharing options for: Noesi Points Out the Way to Salvation is Inward 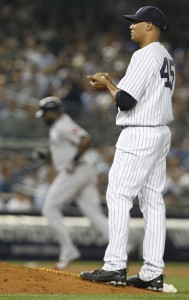 Freddy Garcia’s turkey of a start on Tuesday night and the second day of the amateur draft make for a depressing coincidence. When you consider Garcia’s injury history and recent track record—a 4.69 ERA in his previous five seasons—not to mention the belief-defying miracle that is Bartolo Colon’s season, and the mediocre showing of Ivan Nova, and it’s understandable why Brian Cashman doesn’t want to take his starting rotation for granted. At the same time, when he says, "We are going to have to continue to look for ways to improve our pitching," and, "The pitching has excelled, but it is not wise or prudent to sit back and try not to reinforce and improve on it," I get twitchy, because this seems to imply looking outside the organization rather than within it.

If the Yankees do ignore their own several pitching prospects in favor of acquiring a veteran starter, they risk punishing future teams for this year’s pennant. They will have to trade young pitching for old pitching, and, as the whole of the 1980s and the Carl Pavano years shows, that kind of transaction tends to dig a hole even a team with deep financial resources like the Yankees have a difficult time escaping, especially if they guess wrong.

If you bring up a 23-year-old pitcher, you get to keep him for six years, assuming you’re willing to pay through his arbitration years. If you trade for a 32-year-old, you have him only for the length of his contract, and even then, the period of his effectiveness may be far less than the amount of time he’s signed for. Either way, it ain’t six years, and when he’s gone he leaves nothing behind, because you can rarely get anything in trade for a 35-year-old who wasn’t good enough to pitch for the Yankees, and you haven’t trained up his replacement—in fact, you probably traded his replacement to get him. Now you have to sign a free agent, whoever is available. If you’re lucky, CC Sabathia is on the market. If you’re not, you get Jaret Wright. They cost you a first-round draft choice, so now there’s yet another hole, a ghost in the farm system where a proto-star might have been.

This was the story of the Yankees after the great teams of 1976-1981 grew old. In the 1970s and 1980s, the Yankees made a point of distrusting and eventually chasing off their young pitching. George Steinbrenner lacked the patience to let rookies take their lumps, so twentysomething hurlers were tarred with epithets such as "scared" and packed out of town. At some point, this became a self-fulfilling prophecy because the team gave away a decade of first-round picks to sign free agents and wasn’t very good at identifying pitchers with the picks they did have. Since 1973, the Yankees have had approximately 40 pitchers they drafted and at least to some degree developed make it to the majors. The list of those who were any good is appallingly small. All Yankees pitchers to have been worth at least ten wins above replacement in the major leagues, drafted 1973 to present:Pitcher

For comparison, here is the same period of time in Boston Red Sox history:

Active pitchers not yet eligible to be listed above include Clay Buchholz and Daniel Bard.

Now, there is more than one route to acquiring talent. The Yankees have done very well in the international market, with prospects such as Hector Noesi, Manny Banuelos, and Dellin Betances coming into the organization via that avenue. That helps moderate the risk of the system going completely dry, but it has happened before and will happen again—particularly if the Commissioner gets his way and an international draft becomes part of baseball (don’t hold your breath), or the Yankees just go through a stretch of choosing poorly and/or have a high attrition rate due to injuries.

What seems odd about the desire to look outside the organization is that the Yankees are so deep in pitching prospects. Even if the Triple-A pitchers—David Phelps, Adam Warren, D.J. Mitchell, and Noesi (currently relieving in the majors) aren’t front-of-rotation types, that doesn’t mean they can’t contribute. Given that the quality of pitcher available this summer is likely to fall somewhere well short of Cliff Lee, it would seem likely that running through the internal options will be just as likely to have a happy outcome as dealing a bucket of young arms for a career mediocrity like Jason Marquis. Consider what Noesi has done thus far in the majors, three runs in 15.1 innings, including six innings of two-run pitching yesterday. If he can do that every five days, what’s not ready about him, and who on the outside is going to be better? It would be worth finding out.

Finally, it is worth pointing out that even if the Double-A guys, Betances and Banuelos, are not deemed ready now, that doesn’t mean that a month of six weeks from now the story won’t be different.

Cashman is correct that the Yankees’ rotation will probably need help at some point. Unlike his predecessors, I just hope he has an open mind about where that help comes from.