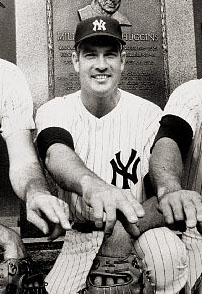 Given Lindy McDaniel's long relief exploits, we wouldn't be surprised to learn that he had more than one pitching arm up his sleeve.

Things couldn't have looked worse for the Yankees in the second inning of Tuesday night's game against the Red Sox. Mark Teixeira had to be helped off the field after being hit in the knee with a Jon Lester pitch in the bottom of the first, and Freddy Garcia was being cuffed around by the Red Sox, who were threatening to add insult to that injury. The Red Sox did ultimately win the game, thus pulling into a tie for first place with New York, but Teixeira's x-rays were negative (which is very positive), and the final score of the game was a respectable 6-4. Luis Ayala getting Kevin Youkilis to fly out to end a bases-loaded threat in the second was the key moment that helped the Yankees avert a route, but what kept the Sox within reach was Hector Noesi's six strong innings of relief, in which the only runs he allowed came on a two-run David Ortiz home run in the fifth.

Noesi's outing was crucial in that it preserved the rest of the pen in the first game of not only an important series, but of a stretch of 16 consecutive games without an off-day. It was also a rarity. The last time a Yankee threw six or more innings in relief was more than four years ago, on April 28, 2007. In that game, a nationally broadcast Saturday tilt also against the Red Sox at the renovated Stadium, Yankee starter Jeff Karstens was hit in the right leg by a Julio Lugo comebacker on his first pitch of the game. The pitch broke Karstens' fibula, but he threw five more pitches to Kevin Youklis before getting pulled for Kei Igawa, who had been banished to the bullpen after posting a 7.83 ERA in his first four major league starts. Igawa, in his lone moment of Yankee glory, twirled six scoreless innings and earned the win as the Yankees pulled out a 3-1 victory.

Indeed, while a relief outing of six-plus innings typically suggests a disaster outing by the game's starter, it has not historically been a sign of sure defeat. The Yankees have had 327 such relief outings since 1919 (which is as far back as Retrosheet's game logs go at the moment), and have won 155 of those games, finishing tied in four others. That's a .480 winning percentage. However, such outings have become increasingly rare. Here's the breakdown by decade:

The longest of those 327 relief outings didn't occur as long ago as you might expect. Lindy McDaniel threw 13 innings of relief against the Tigers on August 4, 1973, relieving Fritz Peterson after what, per the play-by-play data, looks to have been another damaging comebacker on the final out of the first inning. McDaniel took over down 1-0 in the bottom of the second at Tiger Stadium. The Yankees tied things up in the third, but McDaniel coughed a Mickey Stanley solo homer in the fifth and was still trailing 2-1 after the eighth, when the Yankees' rallied against Tigers relief ace John Hiller in the top of the ninth, tying things back up at 2-2. McDaniel then persisted into the 14th, when Horace Clarke led off the top of the inning with a solo shot off Hiller to give McDaniel his first lead of the game, after which Lindy retired the side in order to pick up a much-deserved win in the bottom of the frame.

The longest scoreless relief outing in that bunch was 10 2/3 innings by Dick Tidrow against the Twins on August 25, 1976. Ed Figueroa actually turned in a quality start to begin that game, but thanks to an unearned run, the game was tied 4-4 when he yielded to Tidrow with a man on second and one out in the seventh. Tidrow stranded that runner, then matched zeroes with Twins relievers Bill Campbell, Tom Johnson (for one batter), and Tom Burgermeier (for 7 2/3 innings), before the Yankees finally rallied for the win via an Oscar Gamble leadoff walk, a Willie Randolph sac bunt, and an two-out, game-winning single by Mickey Rivers in the bottom of the 19th.

However, McDaniel, again against the Tigers, was the only Yankee reliever since 1919 be perfect for six or more innings of relief, tossing seven perfect frames while striking out six on August 23, 1968. Roy White tied that game, the nightcap of a Friday double-header at the old Stadium, with a two-run home run in the bottom of the eighth, and McDaniel entered with the score tied 3-3 in the top of the ninth. He then twirled seven perfect frames before yielding to Dooley Womack for the sixteenth. Womack turned in four scoreless innings of his own before the game was finally called a draw after the 19th inning, just after 1:00 am. The game was made-up two days later as part of another double-header, which the Yankees swept, with McDaniel getting a six-out save in the opener.

On the flip side, four Yankee hurlers were allowed to give up nine or more runs while preserving the bullpen for another day in a lop-sided loss. Two of those outings came in the early 1920s (George Pipgras in 1923, Al Mamaux in 1924), and two came under Casey Stengel in the fifties (Don Johnson in 1950, and Art Ditmar, who gave up just five earned runs, but 11 overall in 6 2/3 relief innings on June 8, 1958 as the Yankees fell 14-1 to the Indians). Tellingly, two of those games, Ditmar's and Mamaux's, were the first game of a double-header.

A few other records from among those 327 outings:

Oh, and yes, closers (or firemen, stoppers, relief aces, whatever you want to call them) did used to do that. Goose Gossage had two such outings as a Yankee (both in 1978, and both, remarkably, registered as blown saves, though he threw seven innings in each and allowed just one earned run each time; the Yankees won the first in 13 innings with Gossage getting the win, lost the second in 17 innings, five innings after Gossage had left the game). Sparky Lyle had three, twice earning the win. However, none of those five outings saw the closer-in-question enter before the sixth inning, and Lyle's three outings included just one inning pitched during regulation.

Going beyond the Yankees, Noesi's outing was the fourth relief outing of six innings this season (none have surpassed six frames), but there were just three relief outings of six or more innings in 2009 and 2010 combined. Jamie Moyer was the only man to turn in such an outing in 2009, but there has never been a baseball season without at least one such outing.