Share All sharing options for: The 2011 Draft: Compensation Purgatory 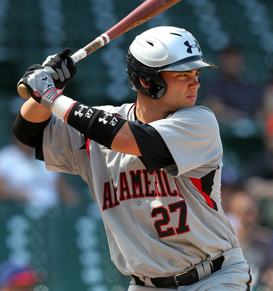 Scouting directors and their crews spend the entire year preparing for the June draft. The three-day event gives them their chance to shine and prove their preparation wasn’t for naught. Some teams arrive ready to dole out large bonus check to replenish their stock of high-ceiling talents (though, if the collective bargaining agreement changes, this may be the last year they're able to do so), after which they use the remainder of their budget to scoop up middling prospects and organizational soldiers. Others draft more conservatively, avoiding players whose agents or college commitments suggest they will be difficult and expensive to sign. On Monday, each team’s braintrust jammed into its war room, laying out draft boards and detailed selection strategies, while club representatives set up shop on the MLB Network studio floor.

The 2011 Rule 4 draft began as expected. Bud Selig’s growl announced that the Pittsburgh Pirates selected former Yankees first-rounder (the 28th overall pick in 2008, who didn't sign) Gerrit Cole, a right-handed fireballer out of UCLA. One selection later, the Seattle Mariners had prospect gurus gathering ‘round a bonfire as their selection of University of Virginia southpaw Danny Hultzen sent many mock drafts up in smoke.

Clubs like the Rays were able to overindulge on the first-round festivities, but the Yankees, having shipped their first-rounder to Tampa Bay with the brilliant signing of now-injured reliever Rafael Soriano, were forced to the sidelines to await the supplementary compensation round and the 51st overall pick. The Rays wound up stealing LSU outfielder Mikie Mahtook with the Yankees surrendered 31st pick, adding a top-20 talent to their haul.

New York received their first-day selection via a gentleman’s agreement with Javier Vazquez, whose diminished velocity rendered him completely ineffective in his 2010 pinstriped campaign and destroyed his Type-A free-agent ranking faster than Kyle Farnsworth blows a lead. Per the agreement, the Yankees offered Vazquez salary arbitration with the assurance that he would decline it and become a free agent. When the Florida Marlins signed the northpaw to a major league deal over the winter, the Yankees got their compensation pick.

As the major prospects came off the board, the Yankees’ choices started to shape up. They’d been heavy on Dillon Howard. Would he be their selection? Or would they take the sliding Josh Bell, a top-15 talent whose college commitment and huge bonus demands seemed to be scaring teams away?

Finally, Lee Mazzilli took to the stage, ready to name the Yankees’ first pick. Hunching over the podium, Mazzilli’s announced, in his thick Brooklyn accent, that the Yankees selected Dante Bichette Jr., the son of the former Rockies bopper.

"What?!?!" seemed to be the consensus on Twitter and among prospect gurus, much as it was last year when the Yankees reached for shortstop Cito Culver. Again, the Bombers’ selection was outside both Baseball America and Keith Law’s top 100 draft prospects. One Twitter follower asked Law, "Yanks realize it’s not actually Dante Bichette right?"

That's a fair—okay, amusing—question. The senior Bichette gained his fame by mashing in Mile High Stadium and Coors Field; per Jay Jaffe, he had an insane career line of .359/.395/.639 at those high-altitude ballparks, but hit a meager .269/.306/.424 on the road. Bichette Sr. was a solid hitter with major power, but he was also aided by his environment.

Like his father, Bichette Jr. has legit power and is capable of hitting some monster homers. Baseball America dubbed him a "cage rat," meaning he takes extra rounds of batting practice, which will benefit him as the Yankees will try to tone down the massive uppercut in his right-handed hack. Though he has toned down his swing mechanics, Bichette Jr. still utilizes an all-or-nothing approach and a longish stroke that prevents him from making enough contact. He hit .640 (55-for-86) during his senior season in high school, with 10 homers, 14 doubles, 40 RBI, and 58 runs. He does have good bat speed, and having big raw power is great, but it’s one of his only tools.

The Little League World Series veteran may have been drafted as a third baseman, but he is far more likely to end up in the outfield. Baseball America says the 6-foot-1, 215-pound 18-year-old has enough speed to man an outfield corner, though how well he hits will determine whether he plays every day. Bichette Jr. has a decent arm, it’s his second-best tool outside of his power, but you will never confuse it for Ichiro Suzuki’s cannon.

Our Baseball Prospectus colleague Kevin Goldstein was slightly more generous in his review of the Yankees’ selection, saying in a chat, "Was he the 51st best talent? No. Not really even close. More of a 2nd-3rd round guy. That said, I might be wrong, because he was moving up boards late on some impressive workouts and can really hit."

The consensus is that Bichette Jr. was an overdraft, and with the big bucks the Yankees hold, they could have dangled a huge carrot in front of a higher-ceiling talent. Damon Oppenheimer, the Yankees' vice president of amateur scouting, said, "Dante is one of the guys in this draft we thought had an impact bat and the potential to hit for big power in the middle of the order." Then again, Oppenheimer kinda has to say that; he’s not going to pan his own picks.

For what it’s worth, Dante Bichette Sr. is good friends with New York skipper Joe Girardi. They were teammates during their Rockies days. That did not have an impact on the selection, but surely Bichette is happy to have his son selected by a club his buddy manages. Bichette Jr. is committed to the University of Georgia, but considering his high selection, it's a good bet he’ll spurn college and go pro. However, the pick is protected, so if the Yankees do fail to sign Bichette Jr., they'll get a compensation pick in the same spot next year.

One pick, an entire draft does not make. The Yankees have 49 more chances to nab players who have fallen due to signability issues, bonus demands, or other questions. Though I would have preferred to see the team take someone like Josh Bell, Austin Hedges, Daniel Norris, or Josh Osich with their first pick, it’s not the end of the world that they didn’t. Besides, there is no way of knowing how well a prospect will turn out until he’s actually in the minors and has to produce. There will still be good talent when New York gets to call another name (with the 88th overall selection), but for the second consecutive year, their first choice has people scratching their heads.