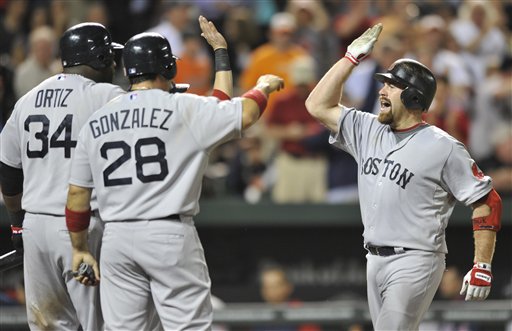 The Red Sox's lineup has Boston right back in the thick of things in the AL East. (AP)

It took a while, but, after two months, the American League East has shaken out roughly according to expectations. The Yankees and Red Sox are battling for first place (the Sox are a game behind, two in the loss column, entering this week's three-game set in the Bronx), the Rays are a close third, the Blue Jays are in fourth and right at .500, and the Orioles are the best last-place team in baseball by both overall record and games behind the division leader.

The Red Sox are rounding into shape on offense and now rank second in the league to the Yankees in runs scored per game on the season. David Ortiz has completely turned back the clock, hitting .325/.392/.594 and leading the team in home runs. Adrian Gonzalez has similar numbers as well as the major league lead in RBIs (both are inflated by luck on balls in play, but, c'mon, this is Adrian Gonzalez). Carl Crawford has hit .318/.348/.512 since the beginning of May and is moving up in the batting order. Kevin Youkilis isn't hitting up to his usual standard, but is still posting a 137 OPS+. Jacoby Ellsbury is improving on his solid 2009 showing, flashing some unexpected power with 18 doubles and 6 home runs already (against previous career highs of 27 and 9). Jed Lowrie has solidified shortstop with above-average production (though he's gotten there primarily by murdering lefties and has hit just .222/.293/.299 against righties on the season, something which could motivate an unusual platoon with the returning Marco Scutaro, a career .270/.333/.378 hitter against righties who is starting against the right-handed Freddy Garcia tonight). Even Jarrod Saltalamacchia has perked up, hitting .300/.352/.680 with five home runs since the start of the Sox's last trip to the Bronx in mid-May. That leaves only right field, where J.D. Drew and Mike Cameron both look done and the team's cumulative batting line stands at .229/.321/.362, as a lingering problem.

The Sox are still scuffling on the mound, however. Though Josh Beckett leads the league in ERA, he has had considerable luck on balls in play (.240 BABIP) and paltry run support (3.45 runs per 27 outs on the season), and while Jon Lester is 7-2, his ERA is barely above average, his walks and home runs are up, and he has been hit hard in four of his last five starts. Behind those two, Clay Buchholz was bounced from this series by a balky back, John Lackey just returned from the DL, where he was nursing a sore elbow, and is still sporting a 7.60 ERA, and Daisuke Matsuzaka is scheduled for Tommy John surgery next week, forcing 44-year-old knuckleballer Tim Wakefield back into the rotation.

The story is similar in the bullpen, where Jonathan Papelbon has allowed eight runs in his last 5 1/3 innings, Bobby Jenks and Dan Wheeler just returned from the DL sporting ERAs near 7.00, and the team has already burned through five lefties, leaving them with 29-year-old Tommy Hottovy as the only southpaw in the pen. Daniel Bard has been solid, and ex-Oriole Matt Albers and ex-Yankee Alfredo Aceves are becoming sore subjects for their former teams, but the Boston pen still has the fourth-worst collective relief ERA in the league, which hasn't been helped by the team's shaky defense, particularly on the left side of the infield, though Scutaro's return could help improve that as well.

Still, the Sox have gone 31-16 (.660) since starting the season 2-10, and all that hitting can cover a lot of shortcomings on the pitching staff, particularly during the regular season, just ask Jon Lester how he went 3-1 in those last five starts, or, heck, ask the Yankees. They've seen plenty of that themselves this year, which, once again, makes these two teams both very evenly matched and very similarly constructed.

Jay took a look at Freddy Garcia last Wednesday, to which I'll add this:

Per Jay, Garcia is succeeding in part because of perhaps unsustainable success with runners in scoring position, but on some level we may have simply underestimated his reliability as a back-end veteran due to his lack of velocity and fly-ball tendencies. Four of Garcia's last five starts have been quality. The one exception being his last confrontation with Boston, when home runs by Kevin Youkilis and David Ortiz plated four runs as Garcia gave up five (four earned) in just 5 1/3 frames.

In direct contrast to Garcia, just one of Lester's last five starts was quality, that being six shutout innings (with 7 Ks) against the Indians two turns ago. Overall, in those last five starts, Lester has posted a 6.52 ERA, yet still went 3-1 thanks to oodles of run support, including in his last start against the Yankees, when he gave up four runs (three on homers by Curtis Granderson and Adam Jones) in six innings, but won 7-5. His opposing starter in that game? Freddy Garcia.

The longest-tenured Red Sock, Tim Wakefield, now 44, has once again found himself in the rotation, this time due to Daisuke Matsuzaka needing Tommy John surgery. In five starts this season, he has gone 2-1 with a 4.25 ERA, with two of those starts being quality and two others missing by no more than a run or an out. In his last three starts (two quality, two close), his ERA has been 3.20. Wakefield is, of course, no stranger to the Yankees. Alex Rodriguez (.270/.369/.528 with 7 homers in 103 PA), Robinson Cano (.304/.319/.696 with 4 homers in 47 PA), and Curtis Granderson (.333/.429/.611 in 21 PA) have had considerable success against him. Those who have had less exposure to his mid-60s knuckler (Nick Swisher, Brett Gardner, Andruw Jones, both catchers) have struggled.

A.J. Burnett held the A's to two runs over seven innings his last time out, but has yet to turn in consecutive quality starts this season. On the other hand, he has had only one disaster start in his first dozen. Though this is already the Yankees' third series against the Red Sox, Burnett hasn't faced them since last year, and the less said about his 2010 season, the better.

Cancel any plans you may have made for Thursday night. This is the real deal.

Beckett leads the AL in ERA, is coming off six-straight quality starts, and has put up this line against the Yankees in two starts (both wins) this season: 14 IP, 6 H, 0 R, 3 BB, 19 K.

Sabathia is tied for the AL lead in wins and is coming off four straight outings of eight or more innings, across which he has gone 4-0 with a 1.60 ERA. CC hasn't pitched particularly well against Boston this season, battling through 5 2/3 innings on April 10, then coughing up six runs in 6 2/3 frames on May 14, but he seems to have found his groove over those last four starts.

There's every reason to expect this match-up to payoff, and with the two teams separated by just one game coming into this series, it will commence either with one team behind by just one game, or the Yankees on the verge of a sweep. This is as close to a must-see game as you can get in early June.