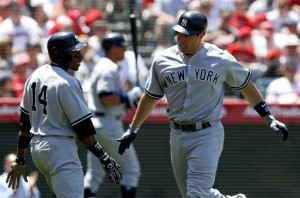 On Sunday, the Yankees won the rubber match of their series in Anaheim to finish their West Coast trip 6-3, keeping them in first place in the AL East and moving them into a tie with the Indians for the league's best record. After tidily shutting out the A's in his previous turn, Bartolo Colon didn't have his best stuff, surrendering three runs in just 5.1 innings and requiring the escape services of David Robertson to avoid a fourth. Despite allowing seven baserunners, the Robertson/Joba Chamberlain/Mariano Rivera triumvirate delivered 3.2 scoreless innings to keep the Halos otherwise at bay.

Mark Teixeria powered the offense with a pair of homers off Joel Pineiro, hitting a solo shot in the third and a two-run job in the fifth to drive in three of the Yanks' five runs. There were a few other positive developments — Brett Gardner doubled home a run among his two hits, Jorge Posada added two hits including a double for his first multi-hit game since May 17, and Nick Swisher homered for the third time in seven games — but the day belonged to the Yankees' first baseman.

Teixeira's been somewhat overshadowed by Curtis Granderson thus far this season, but with his pair of dingers, he actually surpassed his suddenly more celebrated teammate to move into second place in the league home run race with 18; Jose Bautista has been stuck on 20 since homering on Saturday, May 28. The homers gave Teixeira nine in the past 16 games, a span during which he has just eight singles and a .170 BABIP en route to a .262/.329/.677 line. Overall, he's hitting .258/.365/.549, a microcosm of a Yankee offense which is ninth in the league in batting average (.251) but second in OBP (.334) and first in slugging percentage (.445). His numbers are virtually identical to last year (.256/.365/.481) save for more pop, but to an even greater extent than than before, he's been getting a raw deal on balls in play, with a .236 BABIP, down from .268 in 2010, and well below his career mark of .300.

Particularly since he joined the Yankees, teams have employed an extreme shift against Teixeira when he bats against righties, but the switch-hitting 31-year-old has seen his BABIP plummet from his career norms against pitchers of both hands. At the same time, he's shown more power than usual:

Teixeira's BABIP against righties is down 69 points from his pre-Yankee days, but his isolated power is up 45 points, and his home run rate is 2.6 percentage points higher. Similarly, his BABIP against lefties is down 82 points, but his ISO is up 24 points, and his home run rate up 2.4 percentage points. You might expect some of that to be the result of tailoring his habits to hitter-friendly (and particularly lefty-friendly) Yankee Stadium III, but if that's the case, it has more to do with last year than this year:

Teixeira's been Even Steven when it comes to his 2011 home/road splits, with his OBP, home run rate and walk rate literally exactly the same (nine of the former and 16 of the latter in 126 plate appearances in each split); he's got four more doubles on the road (six) than at home (two), but a couple more singles and a couple more sac flies in the Bronx. That's basically nothing, whereas last year's home/road split was cause for concern, since one could infer that he may have developed habits helpful in Yankee Stadium but less so elsewhere.

In any event, the important point is that Teixera's been productive, if somewhat quietly so. His .322 True Average ranks 11th among AL hitters, with Granderson having slipped to 10th at .323 in the midst of a mild 2-for-15 slump over his last four games. Four other AL first basemen rank ahead of Teixera, led by Miguel Cabrera (.366), but Adrian Gonzalez, Mitch Moreland, and Paul Konerko are less than 10 points ahead in TAv. All have BABIPs at least 80 points higher; Gonzalez is 150 points higher (.368). Again with the Yankees in a microcosm, it's a case of trading singles for homers, and that's almost invariably a deal worth making.