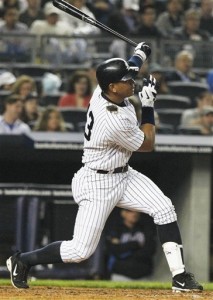 There's no need for Alex Rodriguez to wear a scarlet letter U for Unclutch. (AP)

Thursday was an off day for the Yankees, but Alex Rodriguez nonetheless found himself in the headlines. Apparently, Yuri Sucart, the cousin whom Rodriguez admitted was his steroid mule back in that loosey-goosey era, has been seen traveling with Rodriguez. While Sucart is banned from being around the Yankees' facilities both at home and on the road, Major League Baseball is powerless to stop him from showing up in public places such as team hotels. By the end of the glacially slow news day, MLB deigned to announce that they were satisfied the Yankees were in compliance with their edict, and that there was really nothing else they could do. "He's banned from areas we can control," said MLB's exec veep of player relations, Rob Manfred. "Beyond that, it's kind of silly to have a position on things you can't control." Indeed.

It all amounted to the most boring off-day story in the history of zzzzzzzz, though at least it beat Wednesday's handwringing by Bob Klapisch, who spent an entire article basically discussing how there's no proof that Bartolo Colon did anything wrong regarding his stem cell surgery, but that doesn't mean he should be immune from smarmy insinuation that he did, particularly by those who turned a blind eye to the problem when it was really A Problem. Sadly, this was all too reminiscent of a recent column by Klapisch's partner in crime, John Harper — the two of them teamed up for the schadenfreudelicious The Worst Team Money Could Buy about the 1993 Mets — who wrote a fairly vile takedown of Jose Bautista a couple weeks back, insinuating that he couldn't possibly be clean because, golly, where are all those home runs coming from if there are loopholes in a testing program that's nonetheless the strongest of any of any major sport? File all three of these stories under "Haters Gonna Hate," and use them to line the birdcage of your dead parrot.

Speaking of haters hating and getting back to Rodriguez, one of the bigger knocks on him since coming to the Bronx has been that he was supposedly unclutch. Before going down this road, let's remember that the broad consensus of the smart people who have studied the matter — as opposed to selective-memory'd talk show yahoos ranting about those overpaid bums whose moral failings costs them last night's game — is that while clutch performances, however defined, certainly exist, it is well-nigh impossible to find any player who has consistently done significantly better in such situations over an extended period of time that we can definitively call him a clutch hitter.

While one could point to isolated incidents of Rodriguez's failures in high-profile situations — 2-for-17 as the Yanks squandered their 3-0 ALCS lead over the Red Sox in 2004, 1-for-14 in the 2006 Division Series against the Tigers — A-Rod chased most of those ghosts away in the 2009 postseason, as he hit a sizzling .355/.500/.808 and collected a the game-winning hit in Game Four of the World Series. That Rodriguez hit just .219/.316/.281 in last year's postseason nonetheless serves as a reminder that in a small sample size, anybody can hit anything.

In any event, Rodriguez's supposed unclutchness was the subject of a nice bit of debunking over at Bronx Banter on Thursday, as one William J. (no last name) broke down the slugger's regular season performance since joining the Yankees in 2004 in a few different ways. According to Win Probability Added — the tiny, leverage-based increments by which a player improves his team's chances of winning with each successful plate appearance, and costs them with each out — Rodriguez has more than doubled the number of wins added by any other Yankee in the 2004-2011 span; his 25.6 wins added outdistance Derek Jeter's second-ranked 12.7. A-Rod's total is fifth in the majors in that span, behind Albert Pujols, Lance Berkman, Miguel Cabrera, and David Ortiz. So there's that.

William goes on to dissect the percentage of Rodriguez's home runs and RBI which have come given various score margins. For example, 48.7 percent of his home runs have come with the Yankees anywhere from down by a run to up by a run; helpfully, we also learn that the major league average is 48.1 percent. While that's not the highest percentage on the Yankees in that span — Jeter's at 61.0 percent — it obviously doesn't account for which of the two players has more homers in such situations. It does, however, counter the oft-repeated argument that a significant portion of Rodriguez's homers come when the Yankees are ahead by 10 runs. William also looks at the percentage of homers and runs which A-Rod has put up in low-, medium- and high-leverage situations, and his performance in the ninth inning or later. Here's what he has to say about the latter:

Leverage can be an abstract concept, so perhaps the misconception about Arod stems from a lack of high profile moments? Once again, however, that theory fails when confronted by facts. Since 2004, the Yankees’ have hit 58 homeruns in the ninth inning or later that either tied the game or gave the team a lead/walk off. Of that total, Arod has accounted for 15, or over one-quarter. Not only is that twice as many as Jason Giambi’s seven over the same span, but it’s also the fourth highest amount in franchise history since 1950. What’s more, the Yankees have hit 20 such home runs in their post season history and Arod has two of them (both occurring in 2009).

Across the board, the $275 Million Dollar Man holds up quite well. While there's no single piece of evidence to point to that says he's gone far enough beyond the call of duty to hold up as Indisputably Clutch — then again, who has? — William's done a nice bit of work to counter the idea that Rodriguez deserves any kind of unclutch label. Definitely worth a read, and a bookmark for whenever the next barroom brawl breaks out over said topic.