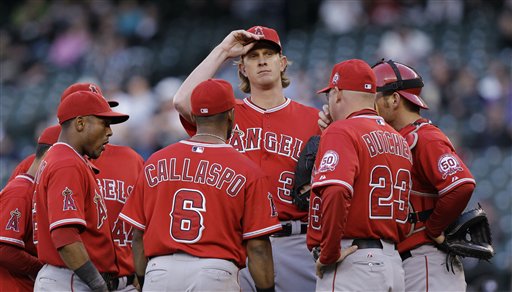 Jered Weaver's starts have been among the few high points in the Angels' season thus far. (AP)

These are lean times for Angel fans. Though the American League West has been fairly (and at times extremely) close thus far this season, the Angels, who won the division five of six years from 2004 to 2009 and won the World Series as the AL Wild Card two years before that run, are struggling to reach .500 (where they currently stand, they were two games below last year), and seem to be moving in the wrong direction. Expected to be serious players for the top free agents this winter, the Angels only managed to sign a pair of lefty relievers in Scott Downs and Hisanori Takahashi, giving up a first-round draft pick for one (Scott Downs), then responded to their failures by taking on Vernon Wells' albatross of a contract.

Things have not gone well since the season started, either. The early returns on the $86 million the team absorbed in taking on the 32-year-old Wells' contract have been a .183/.224/.303 line and a trip to the disabled list. The expected offensive boost from the return of first baseman Kendrys Morales, who broke his leg in a freak accident during a home plate celebration last year, isn't coming as a second surgery has wiped out Morales's season. Howie Kendrick was finally living up to his promise at age 27, but has since hit the DL as well. Rookie catcher Hank Conger hit well enough to actually force Mike Scioscia to play him over pet out-machine Jeff Mathis, but failed to seize the opportunity and is back on the bench. Jeff Weaver and Dan Haren might well be the best one-two rotation combo in the league right now, but they combined for just one win in May thanks to the Angels' inability to score for them (or at all, the Halos averaged just 3.93 runs per game in May). Scott Kazmir, meanwhile, hit the DL after just 1 2/3 innings and looks like he might be finished at 27.

The team the Yankees will see this weekend is one with an offense largely built around switch-and slap-hitting infielders Maicer Izturis, Alberto Callaspo, and Erick Aybar. It's a team that has restored Bobby Abreu to it's outfield in the wake of injuries to Wells and Kendrick (who had moved to left to get Izturis in the lineup after Wells went down), undermining it's fly-ball rotation in the process. Rookie first baseman Mark Trumbo has shown power, but not the ability to hit for average or get on base (in other words, he's the same player he was in the minors). Rookie center fielder Peter Bourjos has allowed the doubts about his ability to hit at the major league level to seep back into the discussion, and has failed to contribute as a basestealer when he does get on (6 for 10). Rookie and former starting prospect Jordan Walden has given the team some stability at closer, but the team still has ten blown saves, tied with Texas for the most in the AL, and a below-average pen ERA.

Since starting the season 12-6, the Angels have gone 17-23 (.425). They might be getting Kendrick back on Saturday, but there's also a chance they will lose Haren the same day (see below). [Update: Haren has been scratched] Not even the presence of the three rookies gives much reason for optimism. The Angels aren't a terrible club, but their not a good one, either, and they only seem to be getting further away from the success they had in the last decade.

Jay took a close look at Nova on Tuesday. My quick take, which largely echoes Jay's: his results aren't the issue as much as how he's getting them. Nova has gone 3-1 with a 3.49 ERA over his last seven starts, but he's not missing bats, he's not getting enough groundballs, particularly in light of that inability to miss bats, and he's only using two pitches, neither of which is strong enough to comprise half of his repertoire. As a result, Nova only has one quality start in his last four turns and a 5.79 ERA over that shorter span.

I've been writing about Weaver all season, both as one of the leading Cy Young candidates in the league and because of his tremendous April, in which he went 6-0 with an 0.99 ERA in six starts, making him just the 13th pitcher since 1919 to win his first six starts while posting an ERA below 1.00 over that span. May was less kind to Weaver. In his first four starts last month, he went 0-4 with a 5.25 ERA. He returned to his April form in his last two outings (16 IP, 1 R), but failed to pick up a decision in either game. Over his last four starts, weaver has posted a 2.57 ERA, but the Angels scored just twice runs while he was still in the game, saddling him with an 0-2 record over that span. Most painfully, Weaver shut out the Twins for nine innings in his last start (2 H, 2 BB, 7 K), only to watch his team lose 1-0 in the tenth.

Weaver's fastball sits right around 90 miles per hour, while he does most of his best work, and gets most of his strikeouts, with his off-speed stuff (slider, changeup, and curve). The improvement he has made over the last two seasons has been largely the result of improved command, control, and ability to mix those pitchers and keep hitters off-balance. He didn't face the Yankees in his breakout 2010 season and had just one quality start against them in three tries in 2009.

Haren has shared Weaver's hard luck over the last month or so. After going 3-0 with a 1.16 ERA in his first four starts (adding a fourth win in an extra-innings relief appearance along the way), Haren went winless in his next seven starts despite a 2.74 ERA over that stretch, taking four no-decisions along the way as the Angels only scored more than three runs in just one of those seven games. Five of those seven starts were better than his last (6 IP, 3 R), which finally earned him his fifth win. On the season, Haren has made ten quality starts in 12 tries and pitched at least six innings every time out. However, he had to cut his bullpen session short on Wednesday after his back tightened up on him. Haren hasn't missed a start since being installed in A's rotation to start the 2005 season, but he has pitched a lot in the six-plus years since as a result (an average of 224 innings and 34 starts in the six years prior to this one and he's among the league leaders in innings once again).

Haren doesn't throw a proper breaking ball (well, the throws a curve, but not often, and it's not a good one), but he changes speeds and movement a lot by mixing a cutter, two-seamer, splitter, and changeup with his 90-mile-per-hour heater. He hasn't faced the Yankees since 2007, when he was with the A's, and didn't finish six innings in either of his two starts against them that year.

Sabathia has completed at least eight innings in each of his last three starts, going 3-0 with a 1.80 ERA while allowing just four walks (1.4 BB/9) and one home run in 25 innings over that span.

Steve wrote about Colon on Tuesday. In two of his last three starts he held an admittedly weak offense (which could also describe the Angels' attack) scoreless for eight or more innings. In the start in between, he was cruising until an odd sixth inning sullied his evening.

Santana is developing something of a Saberhagen-like pattern in which his ERA+ sinks to about 80 in odd years. He's back there again despite solid strikeout and walk rates. In 2007, Santana spent a month in Triple-A mid-season to get sorted out. In 2009, he missed more than two months with arm injuries (elbow and triceps). So far this year, his big problem seems to be start-to-start consistency. Well, that an his old bugaboo the home run, a product of his extreme fly-ball rate, though, once again, that's more of an issue on the road than at home, where this series will take place. Santana started May by striking out seven Red Sox in four scoreless frames before that start was cut short by rain. He then allowed nine runs in 13 innings across his next two starts. Next, he shutout the Braves (4 H, 0 BB, 7 K), then held the A's to just one run over six frames (with another six Ks). Then, last time out, he coughed up six runs in as many innings to the Royals. Cue the Forrest Gump quotes, and note that Santana, like Nova and A.J. Burnett, is a two-pitch pitcher (in his case a low-90s heater and a low-80s slider). Like Burnett, he has a changeup, but rarely uses it. It's hard to be consistent when not having a certain pitch working on a given night means you only have one to offer.