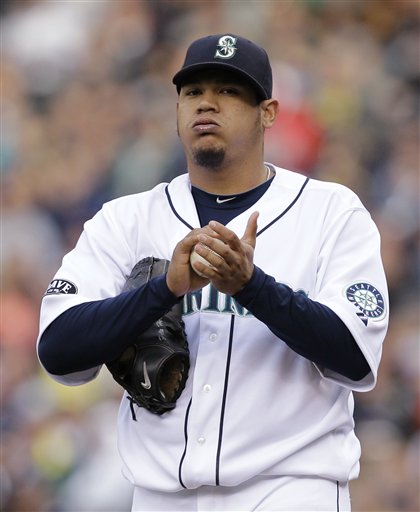 The Yankees have been a thorn in the side of the AL's best pitchers this season. (AP)

Over the last three weeks, the Yankees have developed a knack for drawing their opponents' best starting pitchers. In that span, they have faced Josh Beckett, Jon Lester, David Price, James Shields, Zach Britton, Ricky Romero, Michael Piñeda, Felix Hernandez, Trevor Cahill, Brett Anderson, and Gio Gonzalez, and in the first two games of their series against the Angels, which kicks off tonight, they are scheduled to face Jered Weaver and Dan Haren. Leaving out the last two, whom they have yet to face, those 11 pitchers have combined for the following numbers this season:

Yet, against the Yankees over the past three weeks, those 11 have done the following:

Take those 11 starts out of their combined line above and you get this combined performance:

Comparing that to the line above it, over those 11 games the Yankees touched these pitchers up for two more walks, one more home run (more than doubling the above rate), and more than two additional runs per nine innings while also proving a pinch harder to strike out.

You could argue that the ten earned runs the Yankees put up against Brett Anderson are too heavily represented in that 4.88 ERA above, but even if you take his start out, this is what they did against the other ten hurlers:

If you want to play by Olympic rules and drop the high and low scores, you can drop Beckett's six shutout innings and nine Ks way back on May 14 from the above and get this line:

However you want to slice it, it's hard to deny that the Yankees have had considerable success against some of the best pitchers in the league over the last three weeks. That undermines some of the concerns about the performance of the offense, which, oh by the way, leads the majors in runs scored per game by three-tenths of a run over the upstart Indians.

Looking back over those 11 games individually, the Yankees have gone just 6-5 in those contests, but that has had more to do with their pitching than their hitting and is still a winning record against the league's best pitchers. The last of those 11 starters to earn a win against the Yankees was Lester, who made the second start in that string back on May 15 and gave up four runs in six innings. Since then, the Yankees have gone 6-3 against the others with the starting pitchers in the three losses, Price (5 IP, 5 R), Piñeda (5 IP, 3 R), and Hernandez (7 IP, 4 R) all being stuck with no-decisions in non-quality starts.

As for the four quality starts, James Shields actually gave up four runs in seven innings, but one was unearned. That leaves just three truly impressive outings against the Yankees out of those 11: Beckett's, Britton's (7 IP, 1 unearned run), and Romero's (7 IP, 1 run, earned). There's nothing to be learned from that. Britton and Romero are both lefties, but Britton is a sinkerballer, while Romero's best pitch is a changeup that gives him a reverse split. Beckett is a classic right-handed power pitcher. Beckett is an old foe. Britton is a rookie who faced the Yankees for the first time during the regular season. Romero is more familiar than Britton, but not as much as Beckett. The only detectable trend is that both Romero (6 IP, 2 R, 7 K) and Beckett (8 IP, 0 R, 10 K) also pitched well against the Yankees in a previous start in April. However, Romero entered this season with a 5.70 career ERA in six starts against the Bombers, and Beckett, believe it or not, has a career regular-season ERA of 5.66 against the Yankees in 24 starts, which includes those 14 shutout innings this year.

Besides Weaver and Haren, whom the Yankees have not yet faced this season but will over the next two days (provided Haren's suddenly balk back doesn't result in his being scratched), the best AL hurler not included in the in the above accounting is Justin Verlander. Verlander made two starts against the Yankees earlier in the season. Both were quality starts, but neither was a dominant performance (both 6 IP, 3 R), and both left the Detroit ace with no-decisions in Yankee wins. The qualified AL pitcher with the lowest ERA not on the above list is the Rangers' Alexi Ogando (5-0, 2.33 ERA). Ogando has two non-quality starts this season, the first of which was his only start against the Yankees (6 1/3 IP, 5 R), also a no-decision in a Yankees win. All of which goes to say that the Yankee offense is a) doing just fine despite myriad individual struggles (none of which am I attempting to sweep under the carpet), and b) need not be afraid of any opposing pitcher.