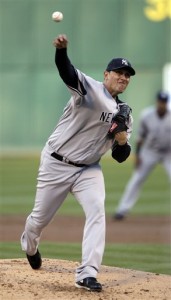 Freddy Garcia delivered the latest in a series of strong outings on Tuesday. (AP)

Left out of Tuesday's discussion of Ivan Nova's rotation spot was any mention of Freddy Garcia, whose strong work thus far has been overshadowed by the fantastic story that is Bartolo Colon. Backed by a whole pile of early runs, Garcia gave the Yankees seven solid innings on Tuesday night in Oakland, limiting the A's to just three runs on nine hits and two walks. He flashed a bit of the Houdini touch, generating an inning-ending double play in the first, escaping a bases loaded jam in the fourth, and ending the sixth with a look-what-I-found stab of a fierce comebacker off the bat of Kevin Kouzmanofff; having saved his skull, he showed outstanding presence of mind peg Mark Ellis out at second base. All in a day's work.

While there was plenty of grousing about the retreaditude of Garcia when the Yankees signed him over the winter, I noted that despite last year's unimpressive 4.64 ERA, Garcia had a knack for delivering quality starts (six or more innings, three or fewer earned runs):

With 18 quality starts out of 28, his 64 percent rate ranked 39th, matching Zack Greinke, Cole Hamels, John Lackey and Cliff Lee, and edging Dan Haren, Jon Lester, Colby Lewis, and well ahead of three-fifths of the Yankees’ regular starters including [Phil] Hughes. Garcia’s swollen ERA (4.64 overall) resulted from a wider-than-normal split in his starts; he posted a 2.73 ERA in his 18 quality starts, and a 10.57 mark in his non-quality starts. In the four worst of them, he combined to allow 25 runs in nine innings. As bad as this sounds, this is actually the way to go, minimizing the number of lost causes and staying competitive in the rest. On a team level, those that tend to concentrate their beatings are the same ones who outperform their Pythagorean records by a wide margin.

That performance wasn’t exactly a fluke; Garcia owns a 58 percent career mark, the same as Andy Pettitte despite a career ERA 0.3 runs higher (4.13 to Pettitte’s 3.83). Barlolo Colon is at 56 percent for his career despite an ERA 0.03 lower than Garcia’s, and he hasn’t been anywhere close to 50 percent since hurting his shoulder in 2005.

Lo and behold, Steady Freddy has delivered six quality starts out of nine this year, a total bettered among Yankee starters only by Sabathia (seven), and a 67 percent rate bettered only by Colon (75 percent). By comparison, A.J. Burnett has given the Yankees five quality starts out of 11, and Nova five out of 10. The major league average thus far is 55.5 percent, a couple percentage points higher than you'd expect based upon the 4.22 runs per game scoring environment (I did the math back in March).

Garcia has pitched to a 3.34 ERA this year, better than either PECOTA (4.85) or his peripherals (4.41, via SIERA) would lead you to expect. It's not that he's been particularly lucky with balls in play; his .282 BABIP is four points below the AL average and six points below the team average. It's not that he's been tremendous with walks and strikeouts; he's been slightly ahead of average in terms of walks (3.0 per nine), and a whisker worse than average in terms of strikeouts (6.5 per nine). He's given up far more than his share of home runs, averaging 1.3 per nine in a league where 0.9 per nine is the norm; his 11.3 percent HR/FB rate is about 27 percent higher than the major league average (per Fangraphs' data, which you have to sum yourself) of 8.9 percent. So how the hell has he kept that ERA so tidy?

Also impressive is the fact that Garcia has given the Yankees at least six innings in seven out of his nine starts — an average of 6.18, third on the team behind the two burly guys — and hasn't allowed more than five runs (or four earned runs) in any of his turns. He's keeping the Yankees in ballgames, and he's not overtaxing the bullpen, which is all that you can ask from a fourth or fifth starter.

The combined contributions of Garcia, Colon, and Nova come out to 177 innings of 3.71 ERA ball (a 111 ERA+) and 17 quality starts out of 27 (63 percent). Even once you account for their peripherals, that's a 4.10 SIERA, right on the league average money; remember, this is from what was supposed to be the second, fourth, and fifth spots in the rotation, Hughes and two palookas. Considering the low expectations most of us held for the back-enders coming into the season, that's pretty remarkable.