If At First You Do Succeed (Then Fail Again and Again) . . .

Share All sharing options for: If At First You Do Succeed (Then Fail Again and Again) . . . 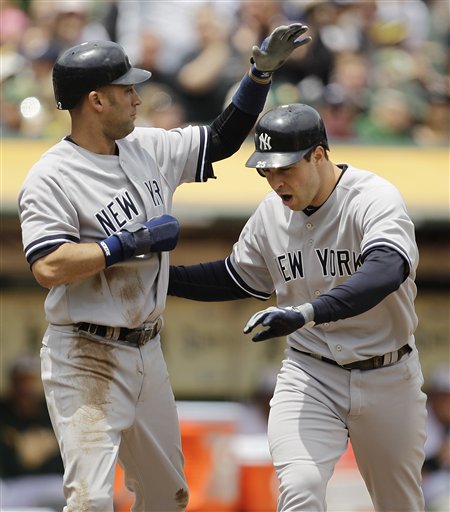 Derek Jeter has been an on-base machine in the first inning, helping the Yankees to many early leads. (AP)

During the Yankees' current west coast swing, the YES broadcasts have made several mentions of Derek Jeter's success in the first inning thus far this season. With a (somewhat questionable) infield single in the first inning Tuesday night, Jeter is now hitting .400/.471/.467 in 51 first-inning plate appearances and .432/.500/.514 in 42 first-inning plate appearances as the Yankees' leadoff man. With two of the top three home-run hitters in the majors hitting behind him in Curtis Granderson (second with 17) and Mark Teixeira (tied for third with 16), Jeter's success in the first inning has helped the Yankees score 43 first-inning runs this season, making it their second-most productive inning after the fifth (44 runs). By way of comparison, the rest of the league is averaging just 29 runs in the first inning, though that is the second most productive inning league-wide after the second.

That all puts a nice spin on the Captain's otherwise poor season, and certainly those runs count as much as runs in any other inning, and have the added advantage of often giving the team and its starting pitchers an early lead. However, the flip-side of that stat is Jeter's numbers in the other seven-plus innings:

Ouch. Nearly a third of Jeter's hits and exactly a third of his extra-base hits have come in the first inning, in which he has made only a fifth of his plate appearances.

Given that data it would seem that the best managerial solution to Jeter's offensive struggles/decline/collapse (take your pick), beyond the unthinkable benching in favor of Eduardo Nuñez, which could ultimately prove to be little more than a lateral move given Nuñez's erratic fielding and impatience at the plate (his walk rate of one every 20 plate appearances is pretty consistent), is not dropping the Captain out of the leadoff spot. Rather it would be an increased willingness to pinch-hit for Jeter later in the game, particularly against right-handed pitching, against which he has hit .248/.310/.314 over the last two seasons (compared to .314/.395/.461 against lefties).

There are several catches here. The first and most obvious is that pinch-hitting for Jeter regularly in big spots would be even more of a public-relations and player-management imbroglio than dropping him in the order, particularly if the pinch-hitters struggle. Second, the Yankees' only left-handed bench option at the moment is Chris Dickerson, who would be better used to spell the similarly platoon-disadvantaged Nick Swisher. Third, we're talking about a fairly small sample of 51 plate appearances. One could come up with some reasons why Jeter might be having more success in the early innings that may or may not hold up to scrutiny (starters throw less of their off-speed stuff early in games and tend to treat leadoff at-bats as low-leverage situations, he's likely to have had more previous exposure to a team's starter than to a given reliever, the old man may just wear down over the course of a game), but it could also just be a random cluster of hits that will disperse over the remainder of the season.

Perhaps if Jeter is still getting the bulk of his hits in the first inning by the time lefty-hitting infielder Eric Chavez is ready to return from the disabled list (which could be in a week or two, actually), Girardi might have more motivation to hit for Jeter against righties late in games. Still, Chavez isn't going to sub in at shortstop (he has played all of six major league innings at short spread across five games, the last coming in 2001, before his body began to give out on him), so the Yankees still wouldn't get the defensive upgrade that should be part and parcel of hitting for Jeter.

So maybe there's nothing there. If nothing else, it's nice to see that Jeter is still contributing in some fashion. Much as we tend to be negative about the Captain in this space, we're only reacting to his performance. His decline is not something we embrace. It is ultimately a reminder of our own mortality. Less dramatically, as the decline of Jeter's skills becomes more and more apparent, it is a reminder that we'll never again see perhaps the greatest Yankee of our generation at the height of his powers. That is a loss we all feel, but not one that needs to prevent the 2011 Yankees from maximizing their potential.