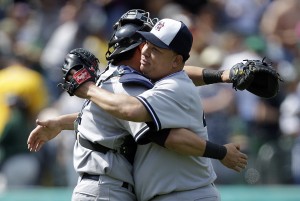 Bartolo Colon and Francisco Cervelli do the happy-player belly-buck. (AP)

Bartolo Colon is purely amazing, the miracle of the century. Some might be tempted to grade his Monday shutout of the Athletics on some kind of curve given that the A’s have one of the sorriest offenses in baseball—even Connie Mack would say, "What the heck?"—but not me. I give him full credit for becoming what all of us, man, woman, and child, dread: a 38-year-old fat man. I was praying to avoid this fate until I was 36… No, 37 and a half. Colon, he got kicked around big-league trainer’s rooms for four years, then missed an entire season, only to come back this year with better stuff and location than he’s had in years. Credit the year off, credit stem cells, but whatever the cause, this is unprecedented.

In looking for a comparison point to Colon, I keep thinking of the ballplayers who went off to fight in World War II and then tried to resume their careers after between one and four years away. Bob Feller, 23 when he left, more or less picked up where he left off when he returned in 1945. On the other hand, Johnny Beazley, a 24-year-old St. Louis Cardinals right-hander who had gone 21-6 with a 2.13 ERA in his rookie year of 1942, had nothing left in the tank when he returned to civilian life in 1946.

Those were young pitchers. How about old ones? In 1942, the government surprised Red Ruffing by calling his number despite his being 37, lacking four toes on one foot, and having a bunch of dependents. After returning, he went 15-9 with a 3.40 ERA, which sounds good, if not Hall of Fame quality, until you realize that he did that over three seasons as he no longer had the old durability in his forties. Ted Lyons, already 41 when he was called up coming off a league-leading 2.10 ERA in 1942, didn’t get back into baseball uniform until 1946, when he was 45. He made five starts and retired.

There are a long list of pitchers both older and younger than Colon who couldn’t come back, and position players as well, who you would think might have had an easier time. There are a couple of Washington Senators whose truncated careers I always mourn, Buddy Lewis and Cecil Travis, the latter of whom in particular was denied what seems like a certain shot at the Hall of Fame by injuries sustained during the Battle of the Bulge and the accumulation of rust. Actually, I shouldn’t take anything away from Lewis, who already had 1112 hits when he was drafted after his age-24 season. By comparison, Derek Jeter had only 588 hits at the same point in his career. But I digress—the point is that it is hard to come back.

Sourpuss that I am, I feel obligated to say, one last time, enjoy this while it lasts. Maybe the stem cells, nanites, gremlins, rebuilt Colon’s innards, but they didn’t leave a warrantee card. Colon wasn’t off fighting a war, but he had spent most of 2006 through 2010 unable to pitch, and when he did struggle to the mound the results were a miserable 14-21 with a 5.18 ERA. Whatever this gift is, I hope it lasts all season, but be prepared for it to vanish as suddenly as it came.

The A’s have an excellent pitching staff and play in a park that makes putting up big numbers, and the same is true, to a lesser extent, of the Mariners. Still, something has to change. I’m not sure what it is. Jesus Montero has had a weak May, but given his overall talent and track record that isn’t particularly meaningful. I’ve seen Jorge Vazquez suggested as a possible interim solution due to his 18 home runs, but given the Mexican League veteran’s utter lack of patience—in 121 games at Scranton he has 36 home runs , 29 walks, and 151 strikeouts—it seems unlikely he would hit enough home runs to offset the number of times he failed to reach base. His numbers remind one of Steve Balboni. Steve had his moments (and was quite friendly when I talked to him once upon a time) but he was a career .229/.293/.451 hitter in the majors—and Vazquez is less patient than he was.

Designated hitter is the only position at which the Yankees can make a change easily, without causing major disruption to the roster and lineup. Sometimes the path of least resistance is the correct one to take.