A Change Is Gonna Come

Share All sharing options for: A Change Is Gonna Come 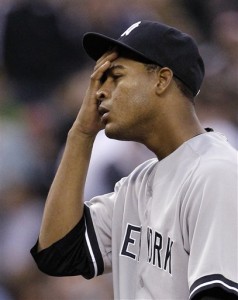 Ivan Nova's recent woes have caused some headaches, though remedies are at hand. (AP)

CC Sabathia and Bartolo Colon have since provided literal and figurative distance from Ivan Nova's 3.2-inning start against the Mariners on Saturday, but the dissatisfaction over Nova's recent work is lingering, and his spot in the rotation may be in jeopardy. "He has the ability to do it. He's just not doing it," said Joe Girardi after the team's wee-hours extra-inning loss. The local headlines have the struggling starter on notice: "Nova’s hold on rotation spot slipping," "Ivan Nova on thin ice," "Yankees intend to stay on rotation, throw Ivan Nova on Friday," and "Team unconcerned about Nova's potential to be mauled by rabid yaks." Just checking to see if you were paying attention there.

By the meager standards expected from the Yankees' back two starters during this spring's rotation derby, Nova hasn't been entirely awful. Sure, his 4.67 ERA is 0.79 runs per nine higher than the league average, but he's given the Yankees five quality starts out of 10, which given ample run support (5.1 per game) has been enough for the team to win six of his starts. Nonetheless, he's walking too many hitters (4.0 per nine) while not striking out enough (4.5 per nine), and not providing much length, averaging just 5.3 innings per turn. After stringing together three strong starts in a row in late April and early May — a span during which he allowed just four runs in 20 innings — he's been rocked for 16 runs in his last 18.2 innings over four starts.

At issue is Nova's thin repertoire. Quoth Girardi: "He is a two-pitch pitcher, and when you don’t have your breaking ball you kind of put yourself in bad spots." Sure enough, Nova has thrown either his four-seamer or his curve 88.8 percent of the time, while his changeup (8.0 percent) and two-seamer (3.1 percent) have been MIA. Batters are swinging at just 42.8 percent of his offerings, which ranks among the majors lowest rates, and while they'ev gone after Colon's offerings even less frequently (42.0 percent), the latter is fooling batters far more often via called strikes. As the Star-Ledger's Marc Carig points out, Nova's 3.9 percent swinging strike rate is the majors' lowest among qualifiers.

Lacking a third pitch to provide some variety, Nova has been cuffed around when facing batters multiple times in a game:

While Phil Hughes remains at least a month away from returning — he's scheduled to throw live batting practice soon, though some would argue that's exactly what he did during his three ugly starts — the Yankees do have other options should they turn away from Nova. Hector Noesi has been impressive in three relief outings, throwing 9.1 innings while allowing just one run. His 5/4 K/BB ratio isn't anything impressive (particularly given an 11/9 K/BB ratio in the minors), but he's shown a proclivity for pounding the strike zone for the bulk of his minor league career; his K/BB ratio on the farm is a stellar 5.1. One of his major league walks was intentional, and particularly during his four-inning major league debut during that epic in Baltimore, the kid — who's all of two weeks younger than Nova, by the way — has shown some moxie with runners on base. According to Texas Leaguers, he's thrown six different pitches: four-seam fastball (48.1 percent), slider (24.0 percent), curve (10.1 percent), changeup (7.0 percent), two-seam fastball (7.0 percent), and cutter (3.9 percent). While there may be some classification crossover amid these admittedly small samples, he's clearly not afraid to use multiple offspeed offerings. Furthermore, he's getting swinging strikes about three times as often (12.8 percent) as Nova.

Also looming in the organization is Carlos Silva, who has compiled a 22/6 K/BB ratio and a 2.13 ERA in 25.1 innings over five minor league starts, most recently at Triple-A Scranton/Wilkes-Barre. He has an opt-out clause in mid-June if he's not promoted, and it doesn't take a crystal ball to imagine that with another solid start from him, and another rough outing from Nova, the Yankees might take a peek before they risk losing him. The chances of the team catching lightning in a bottle with another corpulent castoff aren't all that high, but Silva hasn't drawn reports of looking completely washed up as Kevin Millwood did during his slog through the hinterlands.

Between Nova, Noesi, and Silva, the Yankees may have enough arms to shuffle through either until a healthy Hughes emerges or a deadline deal is made. And no, neither Dellin Betances nor Manny Banuelos are not options yet, as they're walking far too many hitters at Trenton. The Yankees are currently tied for first place in the AL East, but they can't afford complacency, and as Steve noted earlier today, there are very few spots where they can easily make a change. The back of the rotation is one of them, and the time to do so could be just one turn away.