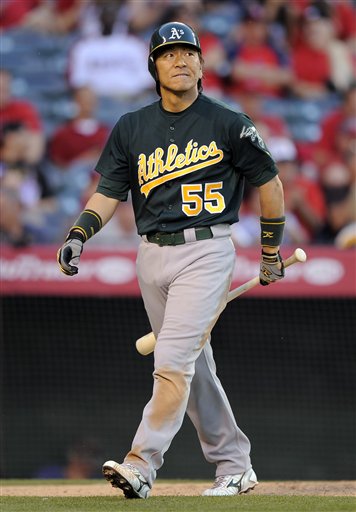 You can't see the fork in Hideki Matsui's back from this angle, but you can tell he's trying to knock it loose with his bat. (AP)

Things are the same all over in the American League West. The Angels, Mariners, and A's are three of the four lowest-scoring teams in the AL and also three of the four best at preventing runs. Only the Mariners and Twins have scored fewer runs than the A's 3.65 per game this year, but the A's also lead the league by allowing just 3.43 runs per game. That's a positive run differential and translates in to the same sort of pinch-better-than-.500 team that they were last year, when they also led the league in run prevention and were fourth-worst in run scoring.

Adding David DeJesus, Josh Willingham, and Hideki Matsui was supposed to goose the offense this year, but Matsui is yet another 37-year-old with a fork sticking out of his back (.226/.282/.346), DeJesus is sporting the worst on-base percentage of his career (.323), and while Willingham has provided a modicum of pop (nine homers, .446 slugging), he also leads the team in strikeouts and has a mere .328 OBP himself. Remarkably, Willingham leads Oakland's starting nine in on-base percentage, which is the first clue as to why they're not scoring. The other is that Coco Crisp is the only other of those nine with a slugging percentage above .400 (he's at .404). First baseman Daric Barton is drawing a ton of walks, but hitting just .211, resulting in a .326 OBP. You can try to blame the A's pitching-friendly ballpark for their struggles, but they're hitting just .228/.292/.338 on the road as a team.

The road has been kinder to their pitching, which has sustained a 2.96 team ERA outside of the Coliseum. The A's staff has been hit by some injuries, most significantly a season-ending shoulder capsule tear suffered by Dallas Braden and a forearm strain that limited just-activated closer Andrew Bailey to just one inning prior to this series (they had to see them coming in the cases of Rich Harden and Brandon McCarthy). Still, the starting trio of righty Trevor Cahill, and lefties Brett Anderson and Gio Gonzalez have been fantastic and form an impressive core for Billy Beane to build around, if he still has it in him to do so.

The A's have won five of six and four in a row coming into this series, but that run was preceded by a six-game losing streak. Such is the nature of a .500 team. The A's are no better than that and don't strike me as a serious threat to the Rangers in the West despite the fact that first and last place in the division are currently separated by a game and a half in that division. They are a significant threat to the Yankees this week, however, as they'll run out all three of those young stud starters while the Yankees counter with the rabbits-foot brigade, which is to say, anyone in their rotation who isn't CC Sabathia.

Just 23 and already in his third full season in the A's rotation, righty Trevor Cahill is emerging as one of the best young pitchers in the major leagues. After a pedestrian rookie season, Cahill took a huge step forward last year, making the All-Star team, finishing fourth in the league in ERA (2.97), winning 18 games, and finishing ninth in the Cy Young voting. Luck on balls in play contributed significantly to that success; per Baseball Prospectus, his .237 BABIP was the lowest among American Leaguers with 80 or more innings pitched last year. As expected, that number has corrected itself this year, but only to .275 thanks in part to his strong groundball rate. Beyond that, Cahill has upped his strikeouts significantly (from 5.4 K/9 last year to 7.1 K/9) while holding the the line on walks and homers. Mix in his friendly home ballpark (his ERA is 1.3 runs lower at home) and Cahill is right back among the league leaders in ERA and wins.

Cahill throws his 89-mile-per-hour sinker half the time, and misses bats with his curve and change. He has thrown at least six inning in each of his last eight starts and has allowed more than one run in just three of his 11 starts on the season, two of those three coming on the road. At home, he has posted a 1.34 ERA in five starts. However, the Yankees hit him hard twice last season, scoring 14 runs in ten innings across two starts, one home, one road, saddling Cahill with two losses and a 12.60 ERA against New York. He didn't have an ERA over 4.80 against any other six teams he faced more than once last year.

Bartolo Colon has gone 0-2 with a 4.81 ERA over his last four starts while the Yankees have gone 1-3 in those games, that despite eight shutout innings in his penultimate turn (a hard-luck no-decision in the lone win in that quartet). His last start was an odd one in that he cruised into the sixth, allowing only a Jose Bautista home run in the first, then caved in and coughed up five runs in the sixth following some questionable managerial decisions on both sides that loaded the bases with no outs in response to a leadoff double. Still, he's fifth in the AL in SIERA, Baseball Prospectus's defense- and park-independent ERA stat (Skill-Interactive Earned Run Average). He's also fifth in K/9, sixth in K/BB, and has been among the most efficient pitchers in the league, averaging just 3.54 pitches per plate appearance (second to injured Athletic Brandon McCarthy), and 14.6 pitches per inning (fourth, behind McCarthy, the Indians Josh Tomlin, and Cy Young leader James Shields).

Anderson emerged alongside Cahill in 2009 as a hard-throwing lefty with big strikeout potential, but has since turned into more of a groundball pitcher, losing a tick off his four-seamer and working primarily with his slider and two-seamer. As a result, he looks a lot like a left-handed Cahill. Both are 23. Both are striking out about seven men per nine innings, while Anderson has been a pinch stingier with his walks. The difference in their ERAs is almost entirely the product of one disaster outing Anderson had against the Rangers at the end of April (5 IP, 7 R). Take that game out, and Anderson's ERA drops to 2.12. Anderson faced the Yankees just once in his injury-riddled 2010 season. He gave up four runs in six innings in the Bronx and took the loss, but just one of those runs was earned. Anderson has a higher ERA at home this year, but again, that's due to that one dud against the Rangers. Take it out, and his home mark drops to 1.82.

Three of Garcia's last four starts have been quality, though he has averaged just 4.7 K/9 over that stretch. Since starting his season with two scoreless outings, he has posted a 4.17 ERA in six starts. The Yankees are 4-4 in his eight starts on the season.

Both Freddy Garcia and Nick Swisher have been traded for Gio Gonzalez, who was flipped three times before finally landing with the A's in 2008. A supplemental first-round pick of the White Sox in 2004, the left-hander was flipped to the Phillies in the Jim Thome/Aaron Rowand trade, then reacquired by Chicago a year later along with Gavin Floyd for Garcia, then sent to the A's a little more than a year after that with Ryan Sweeney and another minor league pitcher for Swisher. He made his major league debut with Oakland in 2008 in the wake of that last trade and finally began to deliver on his promise last year at age 24.

A young, hard-throwing lefty, Gonzalez is a fairly typical power pitcher. He works off a pair of low-90s fastballs, mixes in a big curve, and tends to be a bit wild, walking four men per nine innings in each of the last two seasons. Still, he gets it back with a nice strikeout rate that has surpassed a K per inning in three of his four big-league seasons and, like Cahill, has been lurking on the periphery of the Cy Young discussion this season. Like his rotation mates (minus Anderson's one bad start), he has a sub-2.00 ERA at home this year (1.91 to be specific).

A.J. Burnett has completed six innings just once in his last three starts and has walked 14 (5.3 BB/9) over his last four starts. He has largely avoided disaster thus far this season, only once giving up more runs than innings pitched, but the Yankees' hopes of seeing him "pitch up to his stuff" seem to have been quietly put to bed.