Posey Should Have the Yankees Rethinking Their Position

Share All sharing options for: Posey Should Have the Yankees Rethinking Their Position 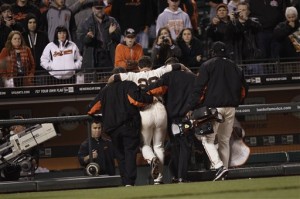 The injury to Buster Posey should resonate with the Yankees both with regards to their recent past and their near future. (AP)

Though it looked otherwise at the time, the severe leg injury that Giants catcher Buster Posey suffered in a home plate collision with the Marlins' Scott Cousins on Wednesday night may not be a season-ender. He's got a broken fibula, which will heal on its own, and sprained ankle ligaments on either side of his joint, which will require surgery to stabilize, but medheads are saying he could be back on the order of two to three months — late July or August — rather than being shelved until next spring, which is a good thing no matter your rooting interest. There's much to debate about whether baseball should adjust its rules to reduce the incentives for a runner to barrel into a catcher as Cousins did, particularly in this case, when the backstop wasn't directly between the runner and the plate; rather than slide into home plate, Cousins took a left turn at Albuquerque and threw his cross-body block at Posey, who didn't even have the ball.

There's also the matter of finding a fill-in for Posey, particularly because the Giants don't have anything but replacement-level fodder on hand; both incumbent backup Eli Whiteside and minor league callup Chris Stewart — who had a one-game cameo in pinstripes back in 2008 — are forecast by PECOTA to post .227 True Averages, the very definition of replacement level. Digging up ol' Bengie Molina (.236 TAv) wouldn't help much either. Which could be where the Yankees come in. At Baseball Prospectus, I joked that so long as the Giants would consider flatlining veteran backstops such as Pudge Rodriguez or Jason Varitek, they might as well consider Jorge Posada, who was actually drafted on general manager Brian Sabean's watch when he was the Yankees' scouting director back in 1990. That's not really an option given that the Yanks have forced Posada to hang up his catcher's mitt, but as has been discussed endlessly since last winter, the Yankees do have considerable organizational depth.

The most obvious move would be to trade Francisco Cervelli to the Giants, which wouldn't bring back a huge haul by any stretch of the imagination, but would open up a roster spot and a role for Jesus Montero. I argued just a week ago that the time isn't right to call up the 21-year-old phenom, who did homer once this past week but is still hitting just .308/.343/.417, with an unflattering 37/8 strikeout-to-walk ratio and a .237 TAv once you translate into major league terms. Another possibility would be to trade Austin Romine, whose .278/.343/.411 translates to a .273/.317/.377 major league performance and a .243 TAv, a bit better than Montero at the moment and more importantly much closer to his own ceiling than Montero is to his. Again, he wouldn't generate a tremendous haul, certainly not what he might fetch if he were riding a hot streak and hitting .320. Trading Montero to the Giants makes no sense, since it isn't as though Posey will be gone forever; additionally, the San Franciscans have a sticky problem to sort out given that top prospect Brandon Belt is a first baseman, requiring last year's hero, Aubrey Huff, to move elsewhere on the diamond where he can flail helplessly while riding out the two-year, $22 million contract he won for last year's heroics.

Admittedly, there isn't an ideal, Yankee-based solution to the Giants' Posey problem, but if nothing else, it's worth absorbing the object lesson in play here. As I discussed back in April, there's more than a little element of truth to the timeworn adage that strength up the middle is a key to building a winning ballclub. In studying the matter, I found that offensive strength from those defense-first positions of catcher, second base, shortstop and center field trumped defensive strength, quite possibly because offense is easier to measure and a single-season sample is a more reliable indicator of skill than a player's glovework, particularly at catcher. The Yankees of the past decade and a half are a perfect illustration of the principle, with Posada, Derek Jeter and Bernie Williams forming the core of three world champions and five pennant winners, and Robinson Cano swapping out for Williams in one mor of each. Jeter, Williams and Cano have all won at least one Gold Glove, but you'll find no defensive metric which proclaims any of them to be the superior one at their position at any given moment; hitting prowess and playing in a large market with plenty of national exposure has much to do with that hardware, and at their best, all three of them certainly had that going for them.

It should not escape notice that the one year the Yankees have missed the playoffs since the 1994 players' strike was 2008, when shoulder woes limited Posada to just 51 games and forced him to go under the knife to repair his labrum in late July. Hip Hip Jorge was just coming off his single best season, in which he hit .338/.426/.543 and was worth 7.1 WARP, a performance that netted him the four-year, $52.4 million deal which is now winding down. While the Yankees certainly had other top-notch hitters in their lineup, and while the blows to their rotation (Chien-Ming Wang's injury and the failures of Phil Hughes and Ian Kennedy looming largest) also played a part, Yankee catchers (including Posada) hit a combined .230/.290/.335 in 2008, which is a generous usage of the word "hit," a combined .210 TAv for those scoring at home. In all, their catchers were worth 2.2 WARP that season, owing entirely to Jose Molina's defense — a 5.5 WARP drop from the year before. Add five wins to that 89-73 team and you've got a club which would have finished one game behind the Wild Card-winning 95-67 Red Sox; add six wins and you have a tie. So yes, Posada's injury quite possibly cost the team a playoff spot.

Which is worth considering both as we appreciate a player's career at a time when it's going somewhat unappreciated by the Yankee brass, and as we look to the future of Montero. Calls for Posey to move positions are being heard all over this great land today, as they have been in recent years for the Twins' Joe Mauer, who has missed most of this season and spent at least a month on the disabled list in 2007 and 2009. While the shape of those two stars' production (both offensive and defensive) differs from what's expected for Montero — who's been described as a Miguel Cabrera-type hitter but a barely serviceable receiver — the underlying question is this: when do you cut and run from the tactical advantage of elite offense at a key position in the hopes of mitigating the risk of losing that offense for a significant length of time due to severe injury?

There's no blanket answer to that question, but one would think that "when subpar defense lowers the value of that production and probably increases the risk of injury" is good enough, whether that injury due to collision, concussion, or whatever else can befall a catcher. Here it's worth noting that both Posey and last year's injured backstop phenom, Carlos Santana, are late converts to the position, less experienced in the mechanics that plate-guarding entails and the risks it poses.

Montero's bat should still be above average if and when he's shifted to first base or designated hitter, and while that's not a clear fit for the 2011 Yankees so long as they have a shot at resuscitating Posada (quietly hitting .259/.385/.352 in May, which isn't much different from Russell Martin's contemporaneous .234/.364/.406), it's much more difficult to see the payoff of stuffing the 6-foot-3, 235-pound behemoth behind the plate for any significant length of his major league career. That's particularly true given that the near-future Yanks can expect strong offense from other positions on the diamond (including the up-the-middle spots of second base and center field if not shortstop, and perhaps even catcher, if the romance with Martin blossoms into a contract extension). So perhaps it's time to face that inevitability with Montero, and just let a player who appears as though he were born to hit do so unencumbered by the tools of ignorance. Whether that means Montero contributing significantly to the 2011 club isn't the point; it's that his maximum value lies with having the lumber in his hands as often as possible from here onward.