Mariano Rivera appeared in his 1,000th game on Wednesday afternoon, becoming the 15th pitcher in history to reach that mark (all primarily relievers, natch), but the first ever to pitch in 1,000 games for a single team. That got me wondering what the all-time leader list for most games pitched for a single team looks like.

First, here are the 15 1,000-game men in major league history, in order of their rank on the all-time appearance list, with the most games each pitched for a single team in parentheses: 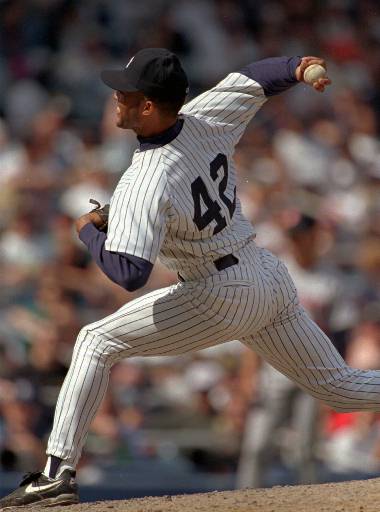 Rivera in game number 28, which was the fourth of four straight scoreless three-inning outings and came in the middle of a 15-inning hitless streak. (AP)

And here's that list again ranked by the single-team totals:

Now here's the list of most games pitched for a single team:

One note on the above list, via John Thorn's 1979 time capsule The Relief Pitcher: Baseball's New Hero: Face was claimed off waivers by the Tigers on August 30, 1968 after having thrown 801 games for the Pirates, but the Tigers waited until rosters expanded on September 1 to take him so as not to have to drop another player. Aware of Johnson's then-record of most games thrown for a single team, Pirates manager Larry Shepard offered to let Face start on the 31st to face one batter and tie the record before giving way to that day's scheduled starter, Steve Blass. Face asked if Shepard could arrange a relief appearance instead to keep his streak of 613 relief outings intact. So, Shepard had Blass start the game but, after one batter, put Blass in left field and had Face face his one man (Felix Millan, who ground out to shortstop on Face's first and only pitch), then restored Blass to the mound. The Pirates could afford such shenanigans because they were 20 games out of first place at the time. All it cost them was a bench player (Carl Taylor, who stood in left for one batter before being replaced by Blass), and they went on to win the game 8-0. It did, however, also cost Blass a shutout, as he finished the game without allowing a run, but the box score showed:

And finally, the leaders for most games pitched by players to only play for one team:

Rivera can't officially claim that record until he retires a Yankee, but he passed Johnson in 2008.