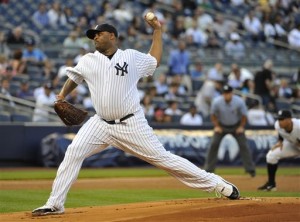 CC Sabathia's complete game on Tuesday night was a rarity for the Yankees. (AP)

It looked anything but probable during his first four innings of work on Tuesday night, but after getting nicked for four runs during the third and fourth frames against the Blue Jays, CC Sabathia went the full nine innings. He threw just 103 pitches overall, tied for his second-lowest total of the season, and retired the final 16 hitters he faced, needing just 46 pitches to do so. That streak began in emphatic fashion, as Sabathia extricated himself from a bases-loaded jam by inducing the dangerous Jose Bautista to ground into a fielder's choice on the first pitch he faced. Ultimately, Sabathia did what he so often manages to do when he lacks his best stuff: hang on until the cavalry arrived. In this case, the Yankees rallied from a 4-1 deficit against the Jays' bullpen, with two runs in the eighth, and two more in the ninth, capped by Mark Teixeira's sharp single off first baseman Juan Rivera's glove, scoring Curtis Granderson.

Sabathia's complete game was the Yankees' first nine-inning complete game since the big man went the distance against the Orioles on May 18, 2009. Amazingly enough, that 341-game stretch is an AL record, though in the interim, the team did have three eight-inning efforts, two by A.J. Burnett and one by Sabathia, plus a rain-shortened six-inning effort by the latter.

In the age of pitch counts and one-inning closers, the complete game is a dying art. Exactly 200 of them have been thrown in the AL since the beginning of the 2009 season, out of 4,874 games; that's 4.1 percent of the time, or one in every 25 games. Fifty-nine of those have been less than nine innings; of the remaining 141, 43 belong to just four pitchers: Roy Halladay (nine), Justin Verlander, Cliff Lee, and Felix Hernandez (eight apiece).

Had he been wearing a different uniform, Sabathia almost certainly would rank among that group; his 10 complete games for Cleveland and Milwaukee in 2008 were the most of any pitcher since 1999, and his 20 from 2006-2008 tied with Halladay for the major league lead. Between the presence of Mariano Rivera and the robust support he's received from the team's offense (6.1 runs per game), the complete game has all but vanished from his arsenal. Sabathia has thrown at least eight innings but yielded to the bullpen 16 times in two-plus years, with Joe Girardi turning the reins directly over to Mo seven times; David Robertson, Joba Chamberlain, and the bullpen's lesser lights make up the rest, often when the lead was wide enough not to be a save opportunity.

Rivera's presence has certainly put a dent in the Yankees' tendency to complete what they've started overall. In fact, they rank last in the American League in complete games since 2006, this despite having the AL's best record during that time:

If you cover the entirety of Rivera's career as closer (1997 onward), the Yankees rank ninth in the AL, this despite not only having the best record but the best run prevention as well:

All of which means that unless you have it saved on your TiVo or other personal recorder, you should buy a time machine and go back to watch Sabathia's performance. You simply won't see many like that for the Yankees.