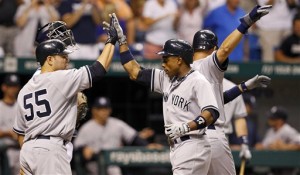 Too many home runs leads to too many high fives at home plate, elevating the risk of celebration-induced injuries and carpal tunnel syndrome for both hitters and hand-wringing columnists. (AP)

All season long, the dominant narrative regarding the Yankee offense has been that it's too reliant upon home runs, that the Yankees don't do the little things, like hitting singles, bunting, or stealing bases. Never mind the fact that balls in play are subject to luck and defense, or that that one-run strategies are so often self-defeating (If you play for one run, that's all you'll get," as the great Earl Weaver liked to say). To eschew either at the expense of the longball is somehow a moral failure and a predictor of future doom in the eyes of some wags. Typifying this attitude — but by no means alone — is the New York Daily News' Filip Bondy:

Nobody can match the Yanks slug for slug, least of all the Mets. The Bombers have become something of a muscle-bound cartoon these days, beating teams mainly by banging the ball into laps to compensate for their other obvious shortcomings.

Hardly anybody ever singles in runners from second or third. Again yesterday, the Yanks managed no hits with runners in scoring position...

So this is hardly pretty or pure stuff, but it gets the blood pumping, pulls in ratings and wins enough games to keep the Yanks afloat in the surprisingly mediocre AL East. This is what big money will buy you: oversized baseball. And if you look at the standings today, somehow the Yanks are back in first place.

This act of contention won't last long, unless the Bombers diversify their one-dimensional attack and start building runs in more conventional fashion. They have played only 18 games on the road so far, and the fences are not as cozy outside the Bronx.

You'd think the Yankees just had their asses handed to them in some disheartening loss, but Bondy's screed followed Saturday's 7-3 Yankees win, which came thanks to a quartet of homers from Russell Martin, Mark Teixeira, Curtis Granderson, and Alex Rodriguez. Never mind the fact that those four homers came from a pool of just seven hits, or that the team had just one at-bat with runners in scoring position during the entire game because Chris Capuano and the Mets bullpen didn't issue a single walk. Moral failure! Won't somebody think of the children?

The Yankees have the AL's second-best record (25-21), its second-best run differential (+46), and its most potent offense (5.17 runs per game). They lead the league in homers by a wide margin, with 71 compared to the second-ranked Blue Jays' 52. Their .443 slugging percentage is 18 points higher than the next-ranked team, the Indians. Yet somehow, the Yankees are doing it all wrong, doing it in a way that apparently causes tabloid columnists' underwear to bunch into painful knots as they find fault even with the team's victories.

Because the Yankees have hit so many homers, it's inevitable that a high percentage of their runs come via that route. A few weeks back, they were on a record pace, deriving 55.5 percent of their runs via homers, more than last year's Blue Jays, who at 53.1 percent had obliterated the previous major league high, though all it got them was a lousy Jose Bautista t-shirt. Since then, the Yankees' percentage of runs via homers has dropped to exactly 50 percent, which would still be the second-highest figure of the play-by-play era, if not all time. And guess what? So has their scoring rate. More on that in a moment.

It's true that some of the Yankees' ability to hit home runs comes with the territory, namely their bandbox Bronx ballpark, which ranks fifth in the majors this season with 1.23 homers per game. But it's a mistake to say it's ballpark alone, or that the Yankees are reaping tremendous advantage from playing to their park. They've outhomered their opponents 43-26 in 28 games in the Bronx, yet they're just 15-13 (.536). They've outhomered them by a more decisive 28-15 margin on the road, and are 10-8 (.556) — an even better record (insert small sample caveat here).

The real, underlying problem is that the Yankees aren't hitting particularly well with runners in scoring position. Their .245/.334/.431 line in such instances actually ranks fourth in the league in OPS and sOPS+; they're 15 percent better than league average in this regard. They've accomplished this despite ranking just seventh in batting average with RISP, and 13th — second to last! — in BABIP (.258, 24 points below average) with RISP, because they're second in isolated power, and third in unintentional walk rate under such circumstances.

Now as we know, balls in play aren't entirely under control of either the pitcher or the hitter, though on a year-to-year basis, they correlate better for the latter. The Yankees hit .300 on balls in play last year, fifth in the league and five points above league average; they were at .292 with RISP, one point above average. With a virtually identical cast of main characters this year, they're hitting .274 on balls in play, 12th in the league and 11 points below average, and 24 points below average with RISP. Yet the Yankee offense is still the AL's strongest; in fact, they're stronger relative to the league than last year. The Yanks are scoring 0.96 runs per game (or 22 percent) more than average in 2011, compared to 0.85 runs per game (or 19 percent) more than average in 2010. Yet because a small handful of hits haven't dropped in as they normally would — and because they're allowing more runs relative to the league than last year (from 0.14 below average to 0.02 below average) — they're suddenly too reliant upon the home run.

It's true that without the home runs, the Yankees would be in worse shape. This is akin to saying that without legs, your ability to outrun a ravenous cheetah would suffer somewhat. The home runs have allowed the Yankees to overcome the days when their offense is otherwise kept at bay. Fourteen times this season, the Yankees have collected at least three hits in a game with runners in scoring position. During those games, they've hit .310/.440/.551, averaged 8.14 runs, and hit 1.93 homers en route to an 11-3 record. Meanwhile, they've failed to collect a hit with runners in scoring position in 11 games, batting a Posada-esque .187/.311/.363, averaged 2.81 runs and 1.36 homers. They've gone 5-6 in those games, which is pretty impressive when you consider that teams scoring exactly three runs have won 36.1 percent of the time this year, and those scoring exactly two runs have won 21.8 percent of the time. Extrapolating from those two figures, a team scoring 2.8 per game should win 33.2 percent of the time, so the Yankees are about 1.3 wins better than average on that score.

The bottom line is that the Yankees' ability to hit home runs with such frequency may not satisfy the purists, or those charged with parceling outrage into 800-word packages even when they win. Such a skill nonetheless gets them through the lean days and nights — months, even — when the hits aren't falling in. It's a problem every other team in the league would kill to have. The hits with runners in scoring position will come sooner or later, and in the meantime the Yankees will remain one of the league's elite teams thanks to their ability to knock the ball out of the yard.