Know When To Walk Jose

Share All sharing options for: Know When To Walk Jose 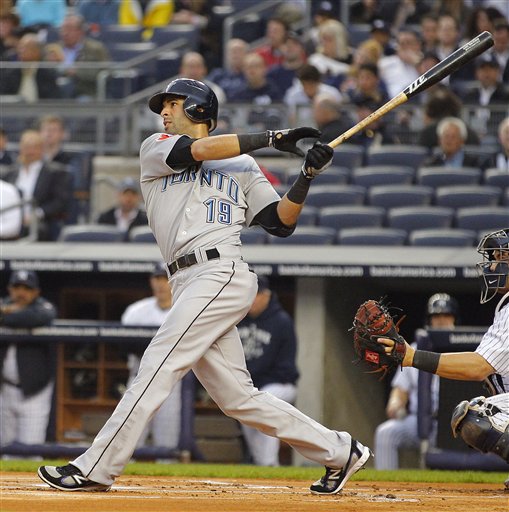 It's not just hindsight that tells us the Yankees should have walked Jose Bautista with two outs and the bases empty Tuesday night. (AP)

It's easy for me to say, as I have in each of my last two Blue Jays previews, that the Yankees (or any other team, for that matter) shouldn't pitch to Jose Bautista given the remarkable Babe Ruth imitation he's doing this season. It's more difficult to determine exactly what the impact of doing so would be in terms of the Jays' run expectancy. The following is a rough attempt to figure out exactly when walking Bautista does lower the Jays' run expectancy, if it ever does. The number crunching is by no means air-tight, but hopefully it will give at least some sense of when and if opposing teams can benefit by refusing to let Bautista hit.

The basis for this analysis is the run expectancy matrix, which shows us how many runs (or what fraction of a run) a team can expect to score in every possible base/out situation. For example, this season, the average bases-loaded, no-outs situation has resulted in 2.2312 runs, while the average bases-empty, two-outs situation has resulted in just 0.0898 runs (those numbers updated through Tuesday night's action thanks to Baseball Prospectus).

The run expectancy matrix can tell us the impact of an intentional walk assuming both the player being walked and the one that follows are league average hitters. With league average hitters, there is no situation in which an intentional walk does not increase the offense's chances of scoring a run. That increase ranges from .1137 runs when walking a batter with first base open and two outs (no matter the location of the other runners), to .8326 runs when walking a man with runners on first and second to load the bases with no outs.

However, when there is a large disparity between the hitter in question and the man that follows him, there are some situations in which run expectancy actually decreases after a walk to the superior hitter. In Baseball Prospectus's essential book Baseball Between the Numbers, James Click, who is now working in research and development for the Rays, calculated just how much better the batter in question would have to be than the man behind him, in terms of batting average, on base percentage, and slugging percentage, in order for an intentional walk to actually reduce the offense's run-scoring expectations for the inning in question.

Click's data is from the 2004 season, a drastically different run scoring environment than the current one (there were 4.81 runs scored per game in the major leagues in 2004, there have been just 4.23 runs scored per game in the American League thus far this season). Still, I'm better off applying his math to a different run-scoring environment than I am attempting to recreate it on my own.

In order to do that, I need to determine how much better Bautista has been than the man hitting behind him. The catch is that five different men have hit behind Bautista in the Jays' lineup this year. The one who has done it the most, Adam Lind, is on the disabled list. The one who did it last night, Yunel Escobar, did so for the first time all season, and the man who did it in the five games prior to last night, Aaron Hill, has been so awful that he'd likely throw off our results. Then again, he's been no worse than the other two men, Juan Rivera and Edwin Encarnacion. Lind has been the team's second-best hitter this season and is due back in a week or so, but for the purposes of the next two games, I'll assume Escobar will be back in that spot, as he and rookie catcher J.P. Arencibia, who has not been given a shot at protecting Bautista, are roughly tied for the dubious distinction of being the third-best bat in the Blue Jay lineup. In applying Click's list, then, I'll evaluate the effects of walking Bautista in front of both Lind and Escobar.

Here are the hitting lines of the three hitters in question:


And here are the gaps entering tonight's action between Bautista and the other two:


Per Click's chart, there are five situations in which opposing teams would be better off walking Bautista and pitching to Escobar. The gap between Bautista and Lind clears the OBP and slugging threshholds for all five of those situations, but their gap in batting average is only big enough for one of them. Here are those four with the required statistical gaps per Click:

The above is, you may have noticed, every two-out situation except for 1st & 3rd, bases empty, and bases loaded, and looking at the run expectancy matrix, I suspect Click left bases empty out of his calculations, as the change in run expectancy when walking a hitter with two outs and the bases empty is the same as the top three situations above, that is the three with the lowest thresholds.

Given that and the fact that the the OBP and SLG differences between Lind and Bautista exceed the above requirements in every situation despite the average difference falling short for all but one, I'm willing to say that teams should walk Jose Bautista every time he comes to the plate with two outs and the bases are not loaded. In fact, I'll go further. Given that the run expectancy for a league-average hitter with the bases loaded and two outs is just 0.6588 runs, I'd say that teams should even walk Bautista with two outs and the bases loaded as long as they are leading the Jays by two or more runs.

Given all of that, I can adjust my initial statement to, "teams shouldn't pitch to Jose Bautista with two outs." The idea being that, with any other hitter, the run expectancy with two outs is so low that it's just not worth pitching to Joey Bats no matter who, if anyone, is on base.

The flip side of all of this, however, is that in every other situation, that is every situation with less than two outs, whether first base is empty or not, the numbers say to pitch to Bautista. Given that, as a baseball fan, I really do want to see Bautista get to swing the bat, that's a compromise I can live with. After all, the guy has made 92 outs already this season. He even made two last night.

Applying this strategy to last night's game, the Yankees should have walked Bautista in the first inning, when he came up with none on and two outs. (They didn't, they pitched to him and he hit a home run.) They then should have walked him in the third after Rajai Davis was called out stealing second during Bautista's at-bat. (They did walk him, officially unintentionally, though Bartolo Colon seemed determined not to throw him a strike in that situation.) However, they should have pitched to him with none out, a man on second, and first base empty in the sixth. (Instead, they walked him. More on that in a moment.) Pitch to him with one out and none on in the seventh. (They did, he popped out to second.) Walk him with two outs and none on in the ninth. (Pitched to him, he fouled out to the catcher.)

That sixth inning was a run-expectancy nightmare for both teams, though it ultimately went the Blue Jays' way. Just to track the first four batters, tossing out the quality of the hitters for a moment, this is how the Jays' run expectancy changed as the two mangers, Joe Girardi and John Farrell, meddled in the proceedings:

• With righty Bartolo Colon on the mound, Cory Patterson leads off with none out and none on (run expectancy: 0.4646 runs)

• Girardi has Bautista intentionally walked, first and second, none out (RE: 1.3986)

• Girardi has Juan Rivera intentionally walked, bases loaded, one out (RE: 1.5450)

The Escobar bunt was even worse than it looks above, because Rivera is hitting just .214/.295/.315 against right-handed pitching this season, which of course also makes Girardi's decision to walk Rivera all the more disastrous.

That the Jays scored five runs in that inning was more Colon's fault than Girardi's, and acquitted Farrell entirely, but both managers worked against their team's best interests by applying strategies that ran counter to run expectancy. We'll see if those two gamblers can do any better tonight.