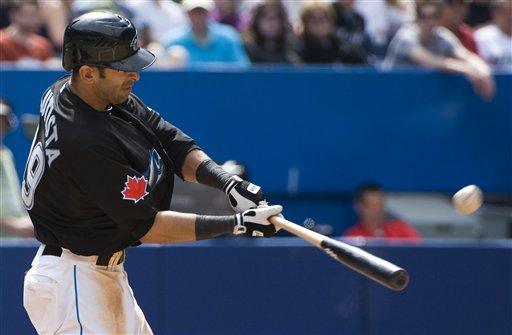 Do not pitch to this man. (AP)

That the Blue Jays are just 2.5 games behind the Yankees and Rays in the AL East tells me two things: 1) Jose Bautista has put the Jays on his back, and 2) the Yankees squandered the opportunity to build a big lead when their rivals were struggling to get out of the starting blocks.

You see, the Jays are 2.5 games back, but they also have a .500 record. They were better than that a year ago and finished ten games behind the second-place Yankees. The Rays and Red Sox famously started 0-5, with the Rays falling to 1-8 before turning things around and the Sox dropping to 2-10, but here we are in the third week of May and both are effectively tied with the Yankees for first place (the Rays officially, the Sox a half game behind).

Here's how the division has looked over the last four weeks:

The Yankees seemed to bottom out a week ago with a six-game losing streak that included a weekend sweep at home at the hands of Boston. Since then, they have won five of six against the Rays, O's, and Mets. That recent surge has been a team-wide phenomenon, as the Yanks have scored 6 2/3 runs per game and allowed just 2.17 runs per game over those last six, but their margin for error has already evaporated.

The Jays, meanwhile, are a better team than their .500 record, at least if third-order wins are to believed (see below). I credit Bautista with a lot of that. He's doing far more than repeating his breakout season of a year ago, he's surpassing it to have, to this point, one of the greatest seasons in baseball history. His .500 on-base percentage and .800+ slugging percentage are legitimately Ruthian, as only the Babe and the 21st-century version of Barry Bonds ever finished a season with both, and he's on pace for 63 home runs.

It's anecdotal to be sure, but on Saturday I was eying Brandon Morrow's start against the Astros because I have Morrow on my fantasy team. Morrow coughed up a couple of early runs, settled down a little after that, but ultimately fell behind 4-0. With one eye on the game, I started to contemplate what to write about Bautista for my Awards Watch column when I turned to the left and saw him blast a three-run home run that made it 4-3 Astros. At that point, hoping to avoid a loss for Morrow (-5 in my league), I said to myself, "one run, c'mon another Bautista homer solves that." I left the game at that point, but when I checked the score later, the Jays had won 7-5. It was a Yunel Escobar home run that claimed the lead, but sure-enough, Bautista added another dinger in the eighth. Bautista is having that kind of season.

He's not all the Jays have going for them. Escobar has been nicely productive for a shortstop. Rookie catcher J.P. Arencibia has eight homers of his own. Third-year lefty Ricky Romero, who starts against CC Sabathia on Tuesday, is emerging as a legitimate ace, and the bullpen has been performing well thus far (2.93 ERA, second best in the league). First baseman Adam Lind was hitting before his back seized up and landed him on the disabled list. Still, strike Bautista from this team, and a .500 record in this division seems like a longshot. With him, they have a third-order winning percentage of .558, a better mark than the Rays.

Baseball Prospectus's WARP (Wins Above Replacement), which combines offense and defense into a total-value stat and has been newly tuned up with improved fielding data, has Bautista as having contributed 4.4 wins above replacement to the Jays cause already this year. The next-highest total in the major leagues is Joey Votto's 2.8, and Bautista has been worth two wins more than third place Miguel Cabrera and Lance Berkman.

Amazingly, Bautista has just four intentional walks on the season. The man behind him in the order, Aaron Hill, is hitting .241/.283/.319 without a single home run this season. How hard can that decision be?

Villanueva is a spot-starter for the injured Jesse Litsch. Acquired from the Brewers in a minor deal for a player to be named later in December, the 27-year-old righty has made 27 major league starts in his career, but the last came back on the final day of the 2009 season, another spot start in which he gave up four runs in five innings. He did, however, throw 69 pitches in a 4 2/3-inning relief appearance on May 7, striking out four against just one walk while allowing just one run to the Tigers. He has also had a full four day's rest since his last relief outing on Wednesday, a pair of scoreless innings against the Rays. Villanueva mixes four pitches (fastball, changeup, slider, curve) that range from 70 to 90 miles per hour, doing his best work with the off-speed stuff. A fly ball pitcher with roughly league-average peripherals, he has excelled out of the Jays' pen thus far this year in part due to luck on balls in play (.132 BABIP), but also appears to have been inducing bad contact (line drive percentage of just 13 percent, against a league average of 19 percent; 20 percent of his fly balls being pop-ups in the infield, against a league average of 12 percent) and has gotten a double play in half of his opportunities (against a league average of 11 percent). His only career appearance against the Yankees was a perfect eighth inning in Toronto back on May 1.

Bartolo Colon's last start was his best as a Yankee, eight scoreless innings against the Orioles in which he allowed just three hits and a walk while striking out seven, tossing just 87 pitches along the way. He last faced the Blue Jays on April 20, allowing just two runs in 6 2/3 innings while striking out seven and picking up the win. One of those runs came on a solo homer by J.P. Arencibia.

Sabathia's last start was also, arguably, his best of the season, another eight scoreless innings against the O's in which he struck out nine without walking anyone. Prior to that, however, Sabathia had been scuffling, going 1-2 with a 5.95 ERA in his previous three starts with ten walks against just 14 strikeouts. Odd fact: Sabathia has faced the Blue Jays just twice in two-plus years as a Yankee, and has never started against them in the Bronx. Sabathia last faced Toronto in his last regular season start of last season, another strong eight-inning outing (actually 8 1/3 innings, three hits, one run, two walks, eight Ks). He also threw eight strong innings against them in May of 2009 (five hits, two runs, but four walks). Meanwhile, he has faced the Orioles 13 times as a Yankee. Perhaps the lack of exposure will work in his favor.

Romero is having a fine season comprised of seven quality starts and a pair of disasters. In his last two starts, he has allowed just one run in 15 2/3 innings while striking out 14. He has been a bit lucky on balls in play, but has also thrice thrown seven or more innings while allowing two or fewer earned runs and been handed a loss or no-decision. On the season, the third-year lefty has 57 strikeouts in 58 innings and a reverse split, that last thanks to a changeup that is his best pitch.

Acquired from the Braves in the Yunel Escobar deal, Reyes (given name: Joseph Albert) was out of options this year, which may have helped him claim the fifth starter's job out of camp. Certainly, his 6.40 ERA, 1.67 WHIP, and 1.31 K/BB in 194 career innings failed to make his case. The 26-year-old lefty has largely alternated good starts and bad thus far this season, but the closest he has come to back-to-back good outings have been his last two: seven scoreless innings with seven strikeouts against one walk against the Astros on Friday and 5 2/3 innings with just three runs (two earned) against the Twins in his previous turn. Reyes has put up solid peripherals thus far, but has been undermined by bad luck on balls in play (.356 BABIP), and poor run support, with the Jays scoring just 3.84 runs per game for him. Reyes throws a couple of low-90s fastballs, a slider, changeup, and the occasional curveball. The slider being the most effective of the lot.

Speaking of poor run support, Garcia has received just 3.29 runs per game from the Yankees thus far and was a hardluck loser in a 2-1 game against the Mets on Friday despite a strong seven-inning outing. Garcia has struck out just nine men in his last 18 1/3 innings and has allowed seven home runs in his last five starts, but has been saved by good fortune on balls in play. The Yankees are just 1-4 in his last five starts, though that's as much the fault of the offense as Garcia.