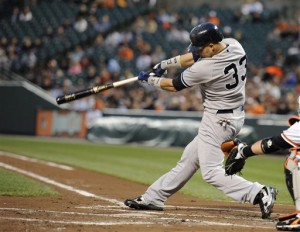 Nick Swisher's big hit on Wednesday night may be a sign he's emerging from his slump. (AP)

The Yankees won a laugher on Thursday night, beating Baltimore 13-2 to notch their third straight win. It was just their second blowout win this month, the other coming in Texas on May 8the day Derek Jeter hit two home runs (we'll always have that day, won't we?). The outcome wasn't in doubt for long, as the Yankees piled up five first-inning runs against Orioles' starter Brad Bergesen, who was pressed into duty when the O's had to call upon Jeremy Guthrie in Wednesday's 15-inning epic. Jeter led off the game with a double, followed by a Curtis Granderson triple, a Mark Teixeira groundout, and then a few batters later, a bases-clearing double by Nick Swisher to run the score to 5-0.

Swisher also collected an RBI single and a walk, giving him his first multi-hit game since May 2, a positive sign given that the 30-year-old switch-hitting right fielder has been mired in a season-long slump. He's hitting just .223/.337/.317, with a few extra doubles — four in his last seven games, more than he'd hit in his first 33 — the only thing differentiating his dismal April performance from his nearly-as-dismal May one. It's a surprising collapse given that last year, he parlayed his reworked swing into career highs in batting average and slugging percentage, hitting .288/.359/.511 with 29 homers.

Exactly what's going wrong is unclear; after last Sunday's loss to the Red Sox, in which reliever Daniel Bard intentionally walked Robinson Cano to face Swisher and then struck him out, Swisher suggested mechanical troubles were to blame: "I feel fine. I’m just battling my leg-kick, trying to find a rhythm. Just trying to go up there and battle every at-bat." He's been taking extra batting practice under the watchful eye of hitting coach Kevin Long, and studying plenty of video. "I feel like I’ve watched so many swings I’m going to puke. The diagnosis is too much movement in his front leg, so that he's out front of pitches, pulling them foul.

Swisher's walk rate, which fell below 10 percent for the first time in his career last year, is back up at 14.8 percent, his strikeout rate (20.1 percent) is right in line with his career norms. Basically, it's just his power that's lacking. According to Fangraphs, his HR/FB rate of 4.5 percent is 10 percentage points lower than his career mark (14.5 percent), suggesting either that he's just had some bad luck or that he's consistently missing a few feet of distance on his fly balls. Check out the distribution of his outs according to the excellent Texas Leaguers PITCHf/x site:

He's hit very few balls deep in the outfield this year, which could well be a manifestation of mechanical flaws in his swing causing him to come up short. At the same time, his line drive rate of 24.8 percent is actually well above his norm (19.0 percent), and those are the balls in play which more commonly turn into hits.

Still, this isn't exactly a Jeteresque loss of power borne of an ever-increasing high groundball rate, it may just be rotten luck on balls in play, suggesting that Swisher will hit his way out of this slump sooner or later; it helps that he has had success working with Long in the past. If you want to hang your hat on small sample sizes, note that he's hitting .244/.333/.415 over his last 48 plate appearances. Maybe that's something, and maybe it's not.