Time For Mike Gonzalez to be Gone

Share All sharing options for: Time For Mike Gonzalez to be Gone

If the Orioles had any decency or self-respect at all, they would get Mike Gonzalez the hell off of their roster. I say that not merely because he laid out Chris Dickerson last night, but because his hitting Dickerson is symptomatic of a pitcher who cannot pitch. 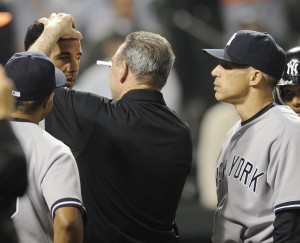 Gonzalez was once an excellent reliever with the Pirates and Braves, as his career 2.92 ERA still attests. Unfortunately, Tommy John surgery, a torn rotator cuff, and frayed labrum have interceded, and the southpaw hurler who was once good enough to close is no more. This season, batters are hitting .357/.406/.625 against Gonzalez. His slider is not what it once was, and batters seem to be sitting on his fastball and creaming it—he’s allowing a line-drive rate of 30%, and even Charlie Brown wasn’t undressed that often. Given that line drives go for hits roughly three-quarters of the time, that rate is a stunning indictment of how bad Gonzalez has been, allowing batters to tag his pitches at nearly twice the league average.

The Orioles signed Gonzalez to a two-year, $12 million contract in December of 2009, so his deal is up. No doubt they are holding on tightly because they figure, "Hey, lefty reliever with a great record, used to close—a contender is going to pay us a king’s ransom for this guy come the trading deadline." It’s a great idea, at least in theory, but when a pitcher is being tattooed the way Gonzalez is, when his ERA is 8.53 and he more or less deserves it, it is difficult to envision the Cardinals giving up Shelby Miller for the guy. When your best-case trade scenario requires the opposing GM to have suffered some kind of debilitating stroke in order for you to realize a decent return, you may as well dream on something else, like being shipwrecked with a boatload of nubile cheerleaders and a lifetime supply of Viagra, because it’s more likely to happen.

So, the Orioles are reduced to dreaming, Gonzalez is reduced to giving up big hits to batters he used to retire, and then spinning Dickerson’s helmet around his head in frustration. What happened last night, both parts of it, Robinson Cano’s hit and the fastball on Dickerson’s brain, should have been the last disappointment of a failed experiment, a moment in which the pitcher showed he has nothing to offer a major-league team except violence and danger.