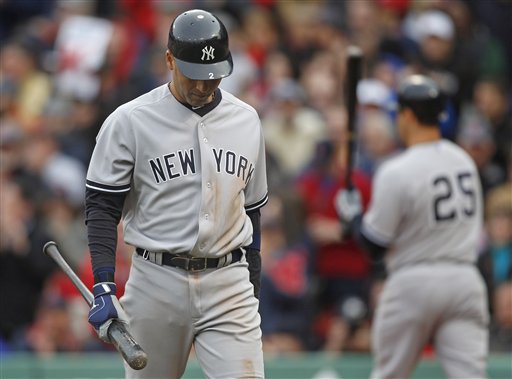 Age ain't nothing but a lot of very unflattering numbers. (AP)

The topic of the day over at SI.com's baseball page is the aging, expensive Yankee roster (blame Jorge Posada). My lead story looks at what the future holds for the six players the Yankees have signed to eight-figure salaries through and beyond their age-34 seasons: Mariano Rivera, Derek Jeter, Alex Rodriguez, A.J. Burnett, Mark Teixeira, and CC Sabathia. I include educated-guess projections for the 2012 and 2013 seasons (save for Rivera, who is only signed for one more year), and list a most-comparable player for each. Here, for example, is my take on what the future holds for the third baseman:

If Jeter's contract is unfortunate, Rodriguez's is a potential disaster, both because of its duration, which will take Rodriguez into his age-41 season, and its price, an annual average of $24.7 million, not counting another potential $30 million tied to home run milestones starting at Willie Mays' career mark of 660, which Rodriguez is just 39 away from. The projections above, which use as their starting point Rodriguez's performance since his 2009 hip surgery (.274/.366/.515), attempt to split the difference between being optimistic and conservative, as they expect Rodriguez to remain healthy and productive but at a somewhat diminished level. Indeed, looking at the "Upside By Year" projections on Rodriguez's PECOTA page over at Baseball Prospectus, that popular projection system believes that Rodriguez could remain a four-win player (roughly his value in 2010) through 2013.

However, PECOTA sees a sharp drop-off to a two-win upside thereafter, and sees Rodriguez's upside as just one win above replacement in 2017, the final year of his contract. That's respectable for a 41-year-old infielder, but is completely out of line with the $20 million Rodriguez will make that year (again, not counting potential home run milestone paydays). There's also the question of how much longer Rodriguez can remain an infielder. John Dewan's defensive plus/minus system rated Rodriguez as five runs below the average third baseman in 2010. With Mark Teixeira blocking first base, and Rodriguez notoriously bad at tracking balls in the air, A-Rod could be pulling down $20-plus million for being a two-win DH in a few years, or he could be undermining that reduced value at the plate by costing his team a significant number of runs in the field.

It's not all bad news, but the squeamish may want to stay away from the Derek Jeter comment. Those readers may want to stick to the Teixeira and Sabathia sections, though even there, concern arises over the leverage the big man holds thanks to the opt-out clause that comes in to play after this season.